Laurel had maybe three minutes of screen time in this week’s episode which is a crime and a sham and a shame. But a true star knows how to make the best of any opportunity. Like that time Dan Aykroyd’s cameo in Indiana Jones and the Temple of Doom stole the whole movie or like how I can’t watch any group scene of We Are the World without only seeing Dan Aykroyd singing in the back row. And Laurel’s face while she is watching Zach and Jenna flirt their way back together is the best part of this whole episode. Laurel steals the show any time she’s around. We need more Laurel and also more of any of the Champions.

So far this season has focused a lot on the Underdogs. Like Nelson’s drunk freak out that Production gave us absolutely zero setup for. It’s just a cut to Nelson in the pool with Sylvia, telling her how much he can’t look at her because when he does their eyes lock and the heavens open and the ghost of Dean Martin rides out on the back of Mr. Ed, both of them singing That’s Amore. I don’t remember ever seeing Nelson and Sylvia talk about anything aside from the elimination. And Nelson was just hooking up with Toya who is only recently out of the house. Which is why Sylvia won’t hook up with him. And also why all of this feels completely out of the blue. Were they so shocked Sylvia won the elimination that they had to scramble to give her a storyline and this was all they had? Or did they just want to give us a good house rampage? Nelson almost broke a bunk bed. I’ve never seen anyone take a bunk bed. Also, Nelson looks a lot like Damon Wayans Jr. but when Nelson speaks when he’s drunk, he sounds exactly like Damon Wayans Sr. doing Anton on In Living Color.

Sylvia beat Kailah in the elimination. And then Shane beat Tony. But Shane won that battle well before the competition. He pulled out the sweetest piece of mental warfare since the night CT stayed up all night berating Wes for hours. Tony got his alliance to vote in Shane because he felt like he could beat him. So at the nomination ceremony, Shane makes the point that if Tony really does think he’s the best competitor, then going up against Shane proves nothing. Tony describes himself as being pretty great at all the things, so Shane’s not making that up. If Tony wins, he’s picking on someone not as good as him. If Tony loses, he got beat by somebody worse than him. And what happened? Tony got beat by Shane. It was a major strategic mistake to say he wanted Shane because he’s weaker. 1) It fires up the opposition. 2) The lines in the house have been drawn already. Tony’s alliance with Cory isn’t a secret. So why not just say “I don’t want to go against Cory because we are working together and if we don’t both go in we have a chance to both stay. Tony isn’t exactly heavy on the strategy though, which is why Shane’s cultivated plan was more successful than Tony’s “I hit it hard” style in the elimination. It is no secret that I find Tony to be the most entertaining man on television. That said, I hate the way he’s treated people, specifically the women on these shows. But nobody knows how to create an unforced error for themselves like Tony. And he’s sober now and a lot of that has gone away. I’m happy for him. It’s good to see him get his act together. Even TJ mentioned it. Hopefully, he stays on this path.

With Kailah eliminated, Cory is now free to run wild again. He asked MTV to do a poll about who he’s going to hook up with next in the house. There are a lot of people gunning to get Cory out of there right now and I don’t think you get a check for “hooking up with the most people on a Challenge.” But the big rumor is that Jenna and Bruno hooked up on the plane ride over. The same people out to get Cory are stirring up a rumor to upset Jenna. I don’t want Jenna to be upset. Jenna is the best. It’s impossible not to root for Jenna. But she’s worried Zach is going to find out and believe it. And I don’t care about Jenna and Zach. Zach has said and done bad things and when someone tells you who they are, then you should believe them. We’ll see what happens next week. Maybe, they might even throw in a competition or two. Who knows! 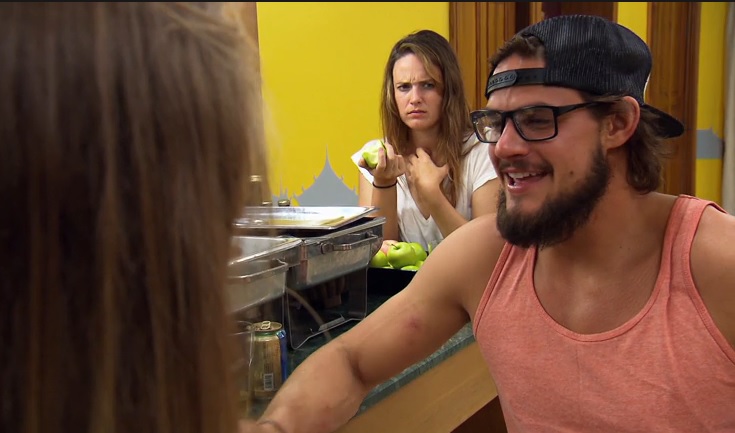