We all know that the Challenge is the most important athletic competition that exists in today’s world. Because it is the only athletic competition that tests all kinds of athletics. There are puzzles for the mental athletics and endurance competitions for the marathon athletics and also eating stuff to test your eating athletics. I bet Bo Jackson would be really good at out-eating people. He’d be like “Bo knows Nathan’s hot dogs” and then swallow seventy or eighty without even getting the bun wet in that glass of bun-dipping . Unfortunately, due to the NFL and MLB not being the most important athletic competitions of our time, we’ll never know how much Bo knows about eating three full birthday cakes.

On the other hand, Eddy Curry is kind of known for being a bust. The Knicks traded ten years of their team for Eddy Curry and ten opening gigs for James Dolan’s jazzy side project band, JD and the Straight Shot. That was the literal trade. They were like take ten years of our franchise, we get Eddy Curry and his heart murmur plus Jimmy Dolan’s band gets to open for 10cc at the Tacoma House of Blues. That said, Eddy Curry was a very, very large human being. He was like 7 feet tall and 350 pounds, not exaggerating. Being that size doesn’t necessarily mean you’ll be great at eating curry. You might not like the taste or the spiciness. It’s not right to assume that Eddy Curry would be magnificent at eating curry in a competition. But could he out-eat Steph Curry? We’ll never know. Because the NBA is also not the most athletic competition of our time.

Ashley really struggled with that curry. To be fair, probably everyone struggled with it after the fact. So much so that the old prankster himself, Johnny “TV’s Bloopers and Practical Jokes With Ed McMahon and Dick Clark” Bananas decides that he needs to save the toilet seat in the girl’s bathroom from having to deal with the curry-aftermath. So he takes it off the toilet and sets it free on a pool float into the algae-green lake. Ashley is not happy. Because according to her “the only thing I have to make me feel better” has been removed from her life. No wonder her and Hunter broke it off by the end of the episode. It is hard being second to a Thailand toilet seat.

Because Ashley is so bad at taking practical jokes, Cara Maria decides to keep pranking her. She put chips under her and Amanda’s sheets. Now, this is a twofold issue. First, Ashley and Amanda are very, very bad at taking jokes. But they are also very, very good at stirring up issues. The whole “Jenna got f******-banged, please beep the ‘finger’ and not the ‘banged’” rumor came from them. So on the one hand, it is pretty funny to see them get so angry about some potato chip crumbs. On the other hand, Cara Maria is maybe the most sensitive player in the history of the game. She knows what it is like to be the butt of the joke and absolutely HATE it. So seeing her mess with these newer players and be like gosh learn to take a joke, is a little like watching the kid who got bullied by a bigger kid go on to bully someone smaller than them. Ahh, the Challenge circle of life.

Shane ate a whole lot of curry and also cut a deal with Nicole, who is on his team but is not on his team within a team. Dario blew up the deal to try and save himself. Everyone got mad at Shane pretty much for playing the game well. I mean has Johnny ever won a season where he didn’t have a “I won’t put you in, you don’t put me in” deal with someone not on his side? I don’t think so. The gambit didn’t work and Dario ended up in the elimination against Nelson, who beat him. Jenna got thrown in because Hunter hates her but really he hates whoever has to go against Jenna because they are guaranteed to lose. Nobody can beat Jenna at anything, she is Lance Armstrong on the dope. Sylvia offered to go in and she went right out after Jenna took her apart with ease.

We’re down to six Champs and eight Underdogs going into next week. Darrell and Johnny want to see each other at the end. Can anyone get in the way of that? Darrell and Johnny are two of the best winners. Who will be the Steph Curry of winning the Challenge? 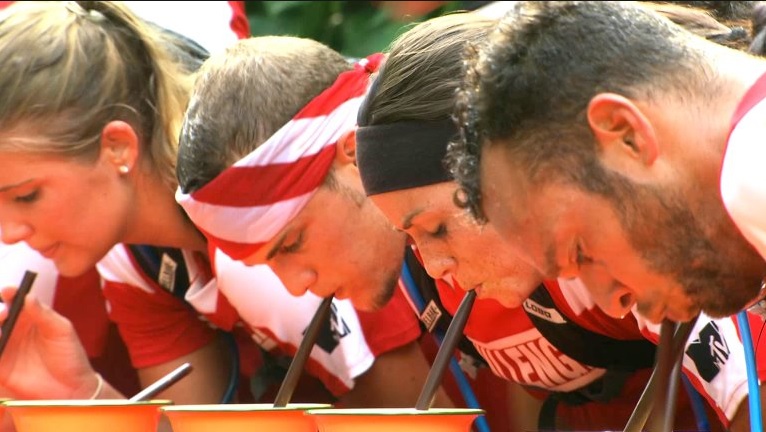