A lot of interested things happened on the Challenge last night. Within one episode we actually got both a challenge and an elimination, which have been few and far between this season. I don’t know about you but I needed that. We got some of that good Ashley aka Smashley “someone is trying to steal my man” paranoia when Hunter was saying he would Netflix and bottle of wine and chill with Cara Maria. Also, how come when Hunter talks about getting a bottle of wine, all I can think of is the stuff they sell at CVS that has a screw top and is “wine product” which is like liquefied grape skins and seltzer? We got Nelson feeling himself without an X pill volunteering to go first in the challenge, even though you never, ever, no matter the weather, ever, ever, ever, ever, ever, ever do that. And we have a little bit of Bananas doing Bananas things even though this one was so obvious, it shouldn’t even count as some great manipulation.

This week was a Champions elimination so no matter what, whether they bank that cash by winning the challenge or not, they are not going in. I repeat for the record, that banking cash as the outcome of the challenge is bogus and nobody but the contestants care about it. Anyway, the challenge was played in pairs and Johnny got Laurel which is already a huge advantage because Laurel is like when George O’Malley failed his doctor exam on Grey’s Anatomy and had to repeat his intern year but already had an intern year so he knew more than all the interns on day 1, except Laurel didn’t fail, she’s just better than everyone already. Johnny got picked to go first, which is a huge disadvantage: see Nelson volunteering and then Amanda immediately falling. Johnny and Laurel did okay the first time but everyone did better because they saw how the game operated. The Underdogs have more players because the game was set up that way so one of the Champion teams got to go again. Basically, Johnny’s “manipulating” here was him saying that he and Laurel would be the smartest pick because Laurel is the best girl so she could rack up more points than any of the other girls, which is 100% true. Obviously Johnny also gets the benefit to his own chances of being safe because if he does better this time, he wins and can’t be chosen for elimination. TJ even mentions that before the vote. Look, I’m not saying it wasn’t the best move for Johnny, but when everyone on his team was like “we got manipulated, Bananas is think two steps ahead” this one feels like it was a pretty basic and straightforward move.

Bananas and Laurel win and the Champs get ten grand (nobody cares). Laurel picks Zach to go in and the women vote for Darrell to go against him. Johnny picks Cara Maria to go in and the guys vote in Ashley to face her. The best part of the vote in this week is when CT picks Camila because he thinks Cara has his back more. Camila doesn’t go in but then she picks CT and he seems surprised about it. He’s like “ohhhhh really??” and she’s like “well yeah duh, you said my name first.” I always like it when someone pretends what they’ve done to you is nothing but what you’ve done to them is a huge betrayal. It’s sort of the backbone of Johnny’s game.

The Champion eliminations are going to be throwbacks to classic eliminations, which I hope means we get the one where CT broke the string instead of unclipping the carabineer and flipped out and TJ was like “you lost get over it.” Ashley put up a good fight but couldn’t pull of the upset. Darrell is my favorite person on the show forever and he put on a clinic of how to beat Zach, who is looking a little extra Ted Kaczynski-like with his mussed hair and beard that only goes along his chin line. I think something is off with Zach this season. He’s unkempt in a way that he’s usually not and in his interviews, his eyes looked glazed over. He’s just not been himself. But back to Darrell who is the best. TJ is like “why do you want to win the money?” and Darrell hits back “because I like winning money.” And TJ is like “what are you going to do with the money?” And Darrell tells him he’s going to buy a camper. And TJ asks “you gonna go camping?” What else would you do with a camper? Is there some other use? I guess TJ could be like “oh planning to start cooking meth in the desert?” But other than that I can’t think of any other camper uses. But I like when those to talk to each other. It’s very straightforward.

Really the most important thing about this episode is the continuation of the Jenna and Bruno rumor from last week. It’s not the rumor itself. I don’t believe it happened and I also don’t think Zach and Jenna should get back together. Zach doesn’t even think that he is good for Jenna. Although his reaction to her finally telling him the rumor is “the Vegan?” which is a pretty great show of incredulity. There would be like ten or eleven other reasons not to hook up with Bruno before getting to “he’s a Vegan.” But the gift that keeps on giving here is the mentioning of the unsubstantiated f*****-bang / f*****-blast that happened on the plane. Again, I don’t think it happened. What I can’t understand is why MTV bleeped out the “finger” part and not the “banging” or “blasted” part. They did it in the audio and the subtitles. Am I completely wrong here? Isn’t the “finger” part completely innocuous without the “bang”? I can’t wrap my head around this. It has blown my mind and I don’t think I will ever be the same. MTV or anyone, someone please explain this to me. Thanks. 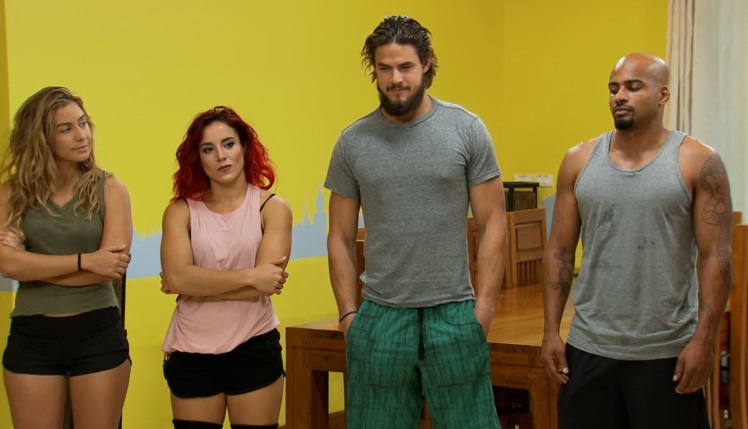