The refugee crisis, which has polarized countries across the globe, is not going away anytime soon. President Donald Trump has made the admission of Muslim refugees into the United States one of his key policy issues. His “Muslim ban” has been the most contentious of his executive orders, causing a political firestorm around the world and considerable tension between the executive and judicial branches in the United States. But how did America, and to a far greater extent Europe, become a welcoming environment for Muslim refugees in the first place?

The Muslim world has been convulsed in chaos for decades. The Iran-Iraq War of the 1980s alone killed an estimated half a million soldiers and civilians. The Iraqi invasion of Kuwait in 1990 brought Western militarism back to the Middle East, further destabilizing the region. Coups, civil wars, political violence and sectarian strife are quotidian events in much of the Muslim world.

There are 1.6 billion Muslims globally, and their lands stretch from the islands of eastern Asia to the Western coast of Africa. According to the Koran, all Muslims make up the ummah, or “Islamic community.” The ummah is mentioned over sixty times in the Koran. It is a foundation of Islam.

The concept states that all followers of the prophet Muhammad constitute a nation. The members of this nation have a religious mandate to act in accordance with one another. Living under the ummah entails a responsibility on every Muslim individual and every ruler to act in a unified way that strengthens the global Islamic community.

This is not a strange concept. Catholics had Christendom. The Pope, much like a Muslim caliph, had the moral, religious, and legal authority to unite all the followers of Christ. As every Muslim looked to Mecca, every Catholic looked to Rome for political guidance. When Pope Urban II called for a Crusade in 1095 against the Muslim presence in the Holy Land, every Catholic from Ireland to Sicily understood the validity of his demand for their help.

In the Koran, explicit texts lay out the duties of the ummah. As in many religions, they include the pieties of charity, friendship, decency and mercy to their co-religionists. Muhammad even forbade feuding among Muslims.

It can be argued that the Muslim failure to adhere to the laws of the ummah is the true foundation of the refugee crisis today. To be clear, I am horrified at the plight of the refugees. The Syrian civil war is a tear in the fabric of humanity. The slaughter of women and children, barrel bombs, chlorine gas, torture and starvation are unspeakable horrors. The impotence of the world’s nations to stop the war crimes demands explanation. A coordinated global response to the Syrian civil war, as well as to the refugees fleeing other Muslim-majority countries, is in dire need. These people are everyone’s responsibility.

However, they are first and foremost the responsibility of the ummah. These are fellow Muslims. Yet instead of exercising the Koranic obligation for Muslims to act peaceably towards one another, terror groups like ISIS have distorted tradition and justify killing anyone who disagrees with them. In the words of Professor Meir Hatina, chair of the Department of Islamic and Middle Eastern Studies at The Hebrew University of Jerusalem, “those who do not identify with us [ISIS] are marked for death.”

Many comparisons to the plight of the Jews in Germany have been made in the American press. Nothing could be further from the truth. Imagine if Jewish governments ruled Poland, Hungary, France (or for that matter Uruguay) at the time of Kristallnacht. The reason that the Jews were exterminated was because they had absolutely no nation to take them in. As the MS St. Louis showed, there was not a friendly port anywhere in the world. The Jews, having no political power, relied on the Raoul Wallenbergs of the world and Harold Ickes of the Roosevelt administration to save them one by one.

This is not the case for Syrian and other Muslim refugees. They are surrounded by Muslim countries. They often share a language, social norms, and even a culinary heritage. Instead of the ummah extending a hand to their brethren, it has turned its back on them. The ummah has forced their fellow Muslims into the lands of foreigners who often share few (or none) of their customs.

This rejection has reached absurd levels. That there are over a thousand Muslim refugees trapped on islands off the coast of Australia, denied entry into the country, says it all. Indonesia, the world’s most populous Muslim country, is close by. How did these Muslims end up so stateless that they need to be relocated to Melbourne?

The ummah was not always so impotent. In 1973, after the Yom Kippur War, the Organization of Arab Petroleum Exporting Countries (OAPEC), consisting of Arab OPEC members and Egypt and Syria, was able to organize itself quite effectively. When it was in their interests to see the price of a barrel of oil increase tenfold, the conservative Gulf leaders and the leftist revolutionaries looked past their differences. They were able to show the world what Muslim unity looked like.

When Muhammad al Dura, a young Palestinian boy, was supposedly shot in Gaza by the Israeli military, there were street demonstrations, and the ummah showed uniform outrage from Rabat to Peshawar (not to mention Oslo and Athens). Why is the ummah so silent now? The streets bereft of angry marchers? No Muslim ruler speaks out and opens his doors except King Abdullah II of Jordan. Turkey and Lebanon do so reluctantly. Can the ummah only send these refugees into the arms of Angela Merkel?

This past summer, Tehran held its annual anti-Israel al-Quds day rallies. Yet more misery and death had been visited upon Syrian Muslims in the previous few months—due to Iranian actions and support for Bashar al-Assad’s regime—than to the Palestinians in the last ten years. The hypocrisy is stunning.

This is the refugee problem that needs to be discussed: why do the Muslim nations that should be responsible for their fellow Muslims reject them? Why in the bitter aftermath of that rejection do they become the Western and Christian world’s responsibility?

These questions need to be addressed by the world’s political bodies now. If they are not, the fringe parties of the West with fringe answers will rise to the occasion, and they will destabilize the very countries in which the refugees seek shelter. 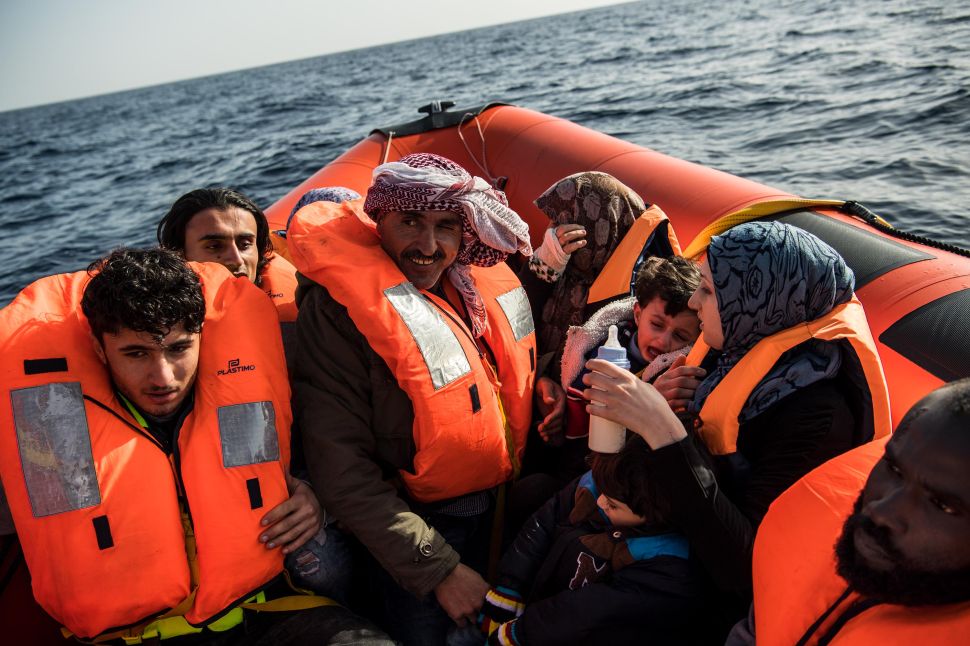