NASA is pursuing a long-term demonstration of laser communication with the hopes that it will become space’s own high-speed internet.

The project, called The Laser Communications Relay Demonstration (LCRD), will help NASA enable much higher data rates for connections between spacecrafts and Earth. Once the project leads to a better understanding into how laser communication works, it could enable rates for space-Earth correspondence (like scientific data downlink and astronaut communication) that are 10 to 100 times better than radio frequency (RF) communications systems currently used.

Laser communications, also known as optical communications, encode data onto a beam of light that is then transmitted between spacecrafts and Earth. This goes for both near-Earth and deep space missions, which is becoming critically important as humans explore Mars and beyond. Additionally, laser communication systems can be significantly smaller and light weight than the current RF systems.

The team is also designing a laser terminal for the International Space Station that will use LCRD to relay data from the station to the ground at gigabit-per-second data rates. It will head to the ISS in 2021.

“LCRD is designed to operate for many years and will allow NASA to learn how to optimally use this disruptive new technology,” said Don Cornwell, director of the Advanced Communication and Navigation division of the Space Communications and Navigation program office at NASA Headquarters, which leads the development of the instrument. 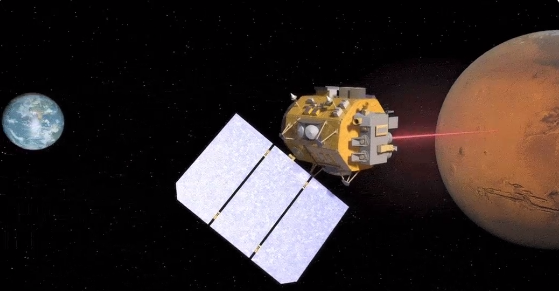