Congressman Daniel Donovan, the representative of the sole red beachhead in blue New York City, today backed one of his former staffers for a soon-to-be-vacant City Council seat that overlaps heavily with the Brooklyn end of Donovan’s Staten Island-based turf.

Last year, Donovan became the first Republican congressman in recent memory to carry the Brooklyn side of the district, even as his constituents there largely backed Hillary Clinton for president. The former Staten Island district attorney replaced fellow GOP Congressman Michael Grimm, who went to prison for tax fraud, in a special election in 2015.

“Liam was an integral member of my Brooklyn staff where I witnessed firsthand his dedication to the community and understanding of the issues we face,” Donovan said in a statement sent to the Observer, arguing McCabe would serve as an antidote to the prevailing liberalism of the overwhelmingly Democratic Council. ” “We need common sense leadership in the City Council, and I know Liam will deliver for the people of South Brooklyn.”

McCabe, who left Donovan’s Brooklyn district office to work as an Uber driver, thanked his old boss for his support.

“I am proud of the work I did for Dan Donovan and the New Yorkers he represents,” the candidate said, citing in particular the congressman’s push to renew the Zadroga Act, which covers the medical expenses of 9/11 first responders.

McCabe faces two GOP primary opponents in the race for the seat, which covers the neighborhoods of Bay Ridge and Dyker Heights and parts of Bensonhurst and Bath Beach. One, John Quaglione, is an aide to State Senator Martin Golden, who represents much of the same area and once held the Council seat himself.

The other, Bob Capano, is an assistant to billionaire supermarket mogul John Catsimatidis, believed to be weighing a second bid for the Republican nomination for mayor. Both Capano and Quaglione unsuccessfully sought to unseat term-limited Councilman Vincent Gentile in election cycles past.

Gentile, who was Donovan’s Democratic opponent in 2015, has launched a longshot bid to become Brooklyn district attorney.

It remains to be seen how much, if any, influence Donovan wields. His base of power is still on his native Staten Island—and even there he was unable to usher his favored successor, Joan Illuzzi, into the district attorney’s office in 2015. She lost to former Congressman Michael McMahon, a Democrat, by 10 points.

The congressman has also shied away from public appearances in recent weeks, after he found himself the target of a national wave outrage over Republican promises to roll back the Affordable Care Act in February. The congressman has since promised not to vote to overturn Obamacare without a replacement program in place, but he nonetheless joined a number of his colleagues in declining to hold a public town hall during the congressional recess last month—instead holding a “telephone town hall” where he took questions via conference call.

Additionally, despite Mayor Bill de Blasio’s broad unpopularity in the Council district, it has trended blue for more than a decade. The likelihood looms that Assemblyman Peter Abbate, a well-wired Democrat who has represented overlapping parts of the turf since 1987, will run for the seat. 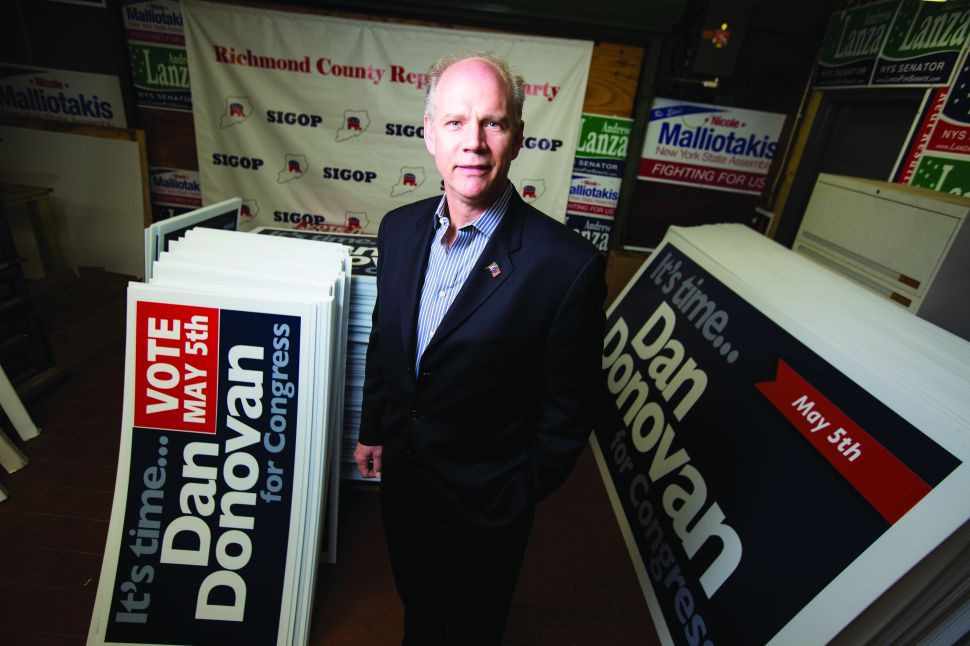