Today would have been Lou Reed’s 75th birthday, and the New York Public Library is celebrating the life of the late Velvet Underground singer, poet and Tai Chi master by announcing their acquisition of Reed’s official archives.

Including approximately 3,600 audio and 1,300 video recordings, clocking in at over 600 hours, the Archive will also include manuscripts, lyrics, poetry, photographs, fan mail, his personal collection of books and records, and other ephemera that spans the entirety of Reed’s career. The NYPL plans to have the Archive available for viewing sometime next year.

Until then, Reed acolytes can head on down to the Library for Performing Arts at Lincoln Center and the Steven A Schwartzman Building (the big, iconic branch at Fifth Avenue and 42nd Street) to check out highlights from the Archive, on view in both buildings through March 20.

The NYPL will also host two public events this month to celebrate Reed. A performance of his Edgar Allen Poe-inspired poetry collection, The Raven, will take place at the Lincoln Center library on March 13, while Laurie Anderson’s Lou Reed: Drones will be held at the Schwartzman Building on March 15. Both events are free, but you’ve got to RSVP here.

At the main entrance to the Schwartzman Building, a crew guy’s typed out list of “The Ten Commandments of a Rock and Roll Band (according to Lou)” lists some questionable, tongue-in-cheek advice:

In the same case, an early, handwritten draft of the lyrics to Ecstasy‘s “Tatters” rests next to a framed black and white photograph of Reed with his widow, the great Laurie Anderson, posing with their dog.

In the next case, a copy of Kung Fu Magazine autographed by Reed’s teacher, Tai Chi master Ren Guayangi, sits next to one of Reed’s notebooks filled with scribbles of practical advice gained during his practice of the ancient discipline, wherein he perfected the state that Lao Tzŭ described as when “the soft and the pliable will defeat the hard and strong.”

But beyond the letter from Paul McCartney and the handbill for the Andy Warhol Plastic Inevitable three-night stand at Bill Graham’s Fillmore featuring The VU & “Pop Girl of ’66” Nico with The Mothers opening (!), the greatest exhumed archival piece might just be Reed’s senior high school yearbook, The Freeport Voyageur.

Under Lewis Reed’s photograph, a friend named Ralph wrote: “To the guy who could be called Freeport’s Gigolo. Best of luck to one of my best friends ever. Hope you do well, but I know you will.” 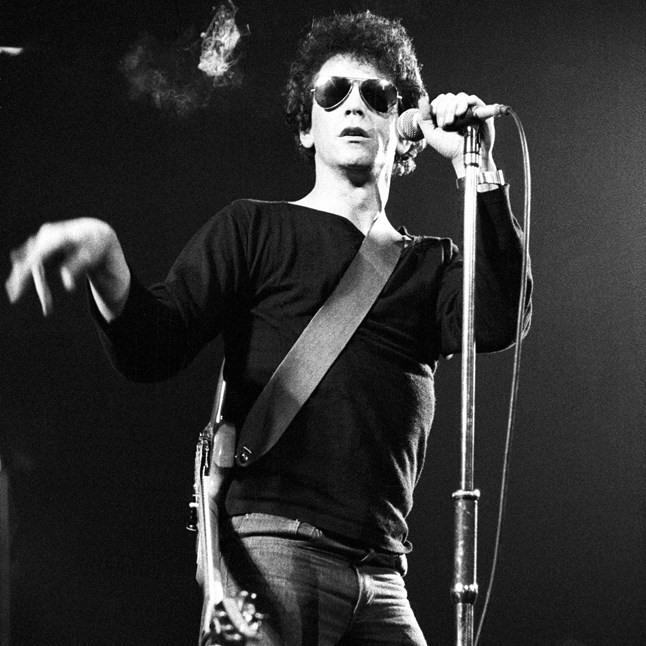