The International Women’s Strike NYC—a coalition representing advocacy groups and labor organizations—led thousands of New Yorkers from the Greenwich Village to Zuccotti Park, site of the 2011 Occupy Wall Street protests, this evening to protest injustices minority women and to blast President Donald Trump and his administration.

The Women’s Strike, an international day of action, planned and organized by women in more than 30 different countries, called for an end to racism, misogyny, gender violence and discriminatory policies affecting women, immigrants and marginalized communities—and for women everywhere to take a day off from paid work, domestic tasks and shopping. Roksana Mun, one of the demonstration emcees, urged the crowd to sign off on postcards to Trump encouraging his exit from the White House.

“I have here in my hand a pink postcard that some of the women here are passing around that they want to mail out to President Trump in the White House by March 15, and it’s a postcard that says, ‘You’re fired!,'” said Mun, director of strategy and training for the South Asian group Desis Rising Up and Moving, to roaring applause to crowd.

Jenna Torres of the Red Umbrella Project, a Brooklyn-based organization that supports sex workers’ rights, recalled to the crowd the abuse and trauma she dealt with in a retail job—more than what she faced as a sex worker or in any other career.

“We’ve been invisible for far too long and we’re gonna be invisible no more,” said Lyons. “You see where I come from, women choose our leadership, we control that. We set them up and we can take ’em down. And I’ll tell you right now: that bastard sitting in the White House wouldn’t be sitting there today if you guys had that privilege as well.”

Lyons recently demonstrated outside City Hall to call on Mayor Bill de Blasio and Comptroller Scott Stringer to take municipal assets out of banks financing the Dakota Access Pipeline. Tonight, she asserted the Trump-approved construction will lead to the exploitation and violation of indigenous women.

“As we see the pipelines going forward, right, this leads to more sexual violence against our women as these transient companies come into our territories and abuse our women,” Lyons continued. “So I’m asking all of you to stand united, this doesn’t just affect me, it affects all of our seven generations yet unborn that are looking up to us.”

The “A Day Without a Woman” strike, started by the organizers of the Women’s March on Washington, sought to use International Women’s Day to illustrate the key role women play in the American and global economies while bringing attention to the economic injustices afflicting females and gender-nonconforming people. Participants—wearing red as a sign of revolutionary love and sacrifice—boycotted paid and unpaid work and shopping in stores or online.

Constance Malcolm and Hawa Bah, mothers of sons who died at the hands of police officers, spoke out against the NYPD at the rally. Bah asked attendees to promise to call the U.S. Department of Justice tomorrow.

“Mohamed was an honor student, he was a yellow taxi driver, he had never committed a crime in his whole life,” Bah said of her son. I want justice, justice for Mohamed Bah.”

Suzanne Adely, co-chair of the National Lawyers Guild International Committee and co-convener of U.S. Labor for Palestine, said they were alerted of some attendees “who seem to be saying things and wearing things that indicate that they might be Trump supporters or just plain old racists.”

“I just wanna remind you that the best way for us to continue focused and with integrity is to—again—to march and chant in unison beginning with, ‘The women united will never be defeated!'” Adely said, with attendees heeding her call and yelled the chant repeatedly.

Public Advocate Letitia James, the first woman of color to hold citywide office in New York, told the Observer that she has “never experienced” the “level of fear that we’re seeing now.” Among her concerns about the Trump administration are the defunding of Planned Parenthood, the repeal of the Affordable Care Act and cuts to subsidized legal services.

Protesters shouted slogans such as, “U.S. imperialist, number one terrorist!,” “If we don’t get it, shut it down!,” “Palestine will be free, from the river to the sea!” and “Refugees are welcome here!” 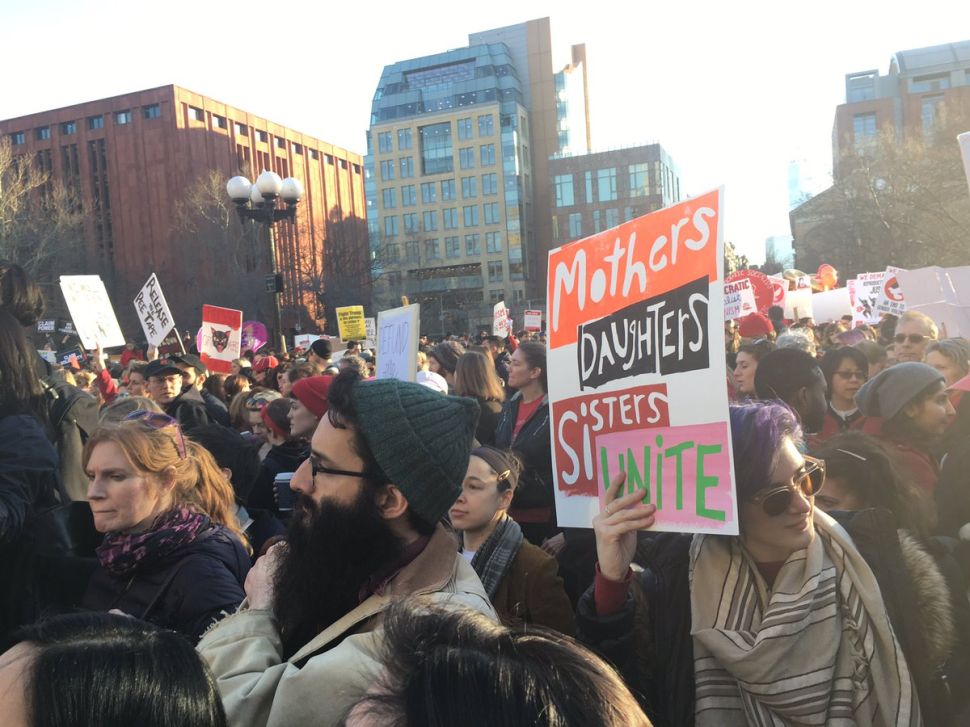