The Scottish First Minister, Nicola Sturgeon, has announced she wants to hold a second referendum on independence from the United Kingdom. Speaking at her official residence, Bute House in Edinburgh, Sturgeon said she will put the proposal to a vote of the Scottish Parliament next week.

The First Minister claimed the move was in response to the Brexit, which Scotland voted against. The Queen is expected to sign the law enabling Brexit tomorrow, with the Prime Minister formally notify the EU of the UK’s intention to leave later that day.

This is not the first time Scotland has held a referendum on independence—the last one in September 2014 was overwhelmingly defeated. A total of 1.6 million people voted in favor with two million voting against. The gap would have been even wider had Scottish people living in England, Wales and Northern Ireland been allowed to vote.

If Scotland does vote for independence, the country might be allowed to remain in the European Union, despite Spain saying they would veto any application. In the eventually of a “hard Brexit,” where the trading relations are based on World Trade Organization rules, products exported from Scotland to England would be subject to a 7 percent trade tariff. Something that is likely to cause a recession in Scotland.

Another effect of independence might be a new border control between England and Scotland. This is an unpopular move but is seen as necessary because the Scottish government does not intend to build a security service capable of tracking terrorists using the country as a stepping stone to England. Also, the EU has said it believes there should be borders between EU and non-EU countries—except in the case of Ireland.

Scotland is home to one of the world’s largest banking sector, and during the 2008 crisis the Bank of England bailed out the RBS to the tune of $55 billion (or $10k for every man, woman and child) in Scotland. Most Scottish banks said they would have to move to London in order to maintain the protection of the Bank or England.

Sturgeon said: “[If] Scotland can be ignored on an issue as important as our membership of the EU and the single market, then it is clear that our voice and our interests can be ignored at any time and on any issue.”

She continued: “I will now take the steps necessary to make sure that Scotland will have a choice at the end of this process… A choice of whether to follow the UK to a hard Brexit—or to become an independent country, able to secure a real partnership of equals with the rest of the UK and our own relationship with Europe.”

Although the Scottish Parliament does not have the power to hold a second referendum, it is unlikely Westminster would refuse it. Sturgeon does not have a majority in the Parliament but has hinted that a Green Party representative might vote with her, providing enough votes for the proposal to pass.

There are no dates set for the referendum, and polling shows fewer Scots support independence now than they did at the time of the last poll. However, Sturgeon justified her call for a new referendum because the SNP had specifically pledged to hold one if the British constitution was significantly changed. 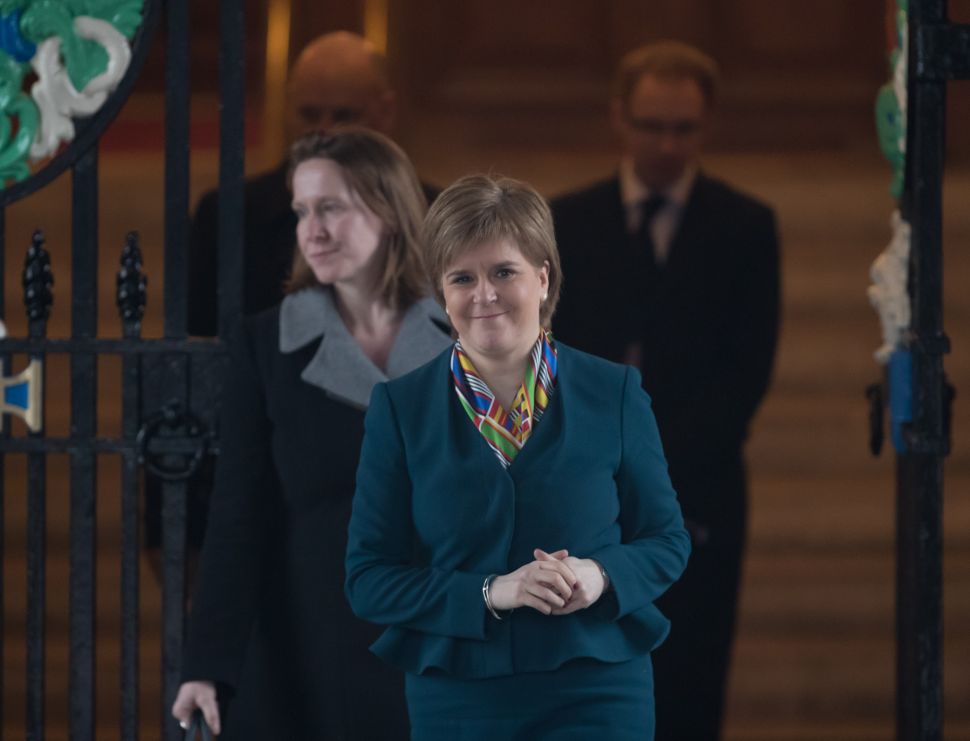