President Donald Trump’s accusation that former President Barack Obama ordered wiretaps of him at Trump Tower during the 2016 election sent media outlets and partisans into a frenzy. Obama was reportedly furious about the claim and his spokespersons have denied the accusations. Although the ACLU and some news outlets have noted that the FBI conducted surveillance under FISA on the Trump campaign in October 2016, the target of that surveillance is still unknown.

A 2013 editorial on warrantless wiretapping written by ACLU lawyer Mitra Ebadolahi for the American Bar Association noted that the FISA Amendments Act passed under the Bush administration “eliminated FISA’s probable-cause and individualized-suspicion requirements; under the FISA Amendments Act, the government can obtain a FISA Court order authorizing surveillance for up to one year by certifying that the targets of its surveillance program are ‘reasonably believed to be located outside the United States.’ 50 U.S.C. § 1881a(a). This certification is the primary substantive limitation on the government and opens up huge swaths of international communications to surveillance.”

It was widely reported that, before he left office, Obama allowed the NSA to share intercepted communications with other intelligence agencies, enabling recent leaks from intelligence officials.

Former NSA senior analyst J. Kirk Wiebe, a 32-year veteran of the agency who received the NSA’s Meritorious Civilian Service Award, criticized the deep state enabled by the Bush and Obama administrations. “Over a decade and a half ago, the NSA Four (Bill Binney, Ed Loomis, Tom Drake, and myself), together with House Intelligence Committee Senior Staffer Diane Roark pleaded for a surveillance system that protected the innocent, in order to prevent the destruction of individual privacy guaranteed us all by the U.S. Constitution. Nobody listened. No one cared. No one took corrective action,” he wrote. “Today, we see unfolding before our very eyes a constitutional crisis of monumental proportions, one that threatens the very foundations of our nation’s system of governance. People hidden in the bowels of the United States Intelligence Community are leaking classified information taken from the private phone calls of innocent people—people who have not been accused of committing any crime—to the press for purely political reasons, reasons that include an attempt to take down our duly elected administration.” Had the concerns of whistleblowers from high ranking positions and Edward Snowden been addressed, the U.S. wouldn’t be faced with an impending crisis because the intelligence community lacks appropriate oversight.

Wiebe adds, “had the approach we advocated over 16 years ago been used—one that featured a built-in capability that prevented the kind of access to, and disclosure of, private information we are seeing in the news—we would not be witnessing the abject abuse of authority that is unfolding before us. President Obama’s order just before departing the White House that spread access to NSA’s intercepts to hundreds of additional people across all 17 agencies of the Intelligence Community would not have mattered. Innocent people’s private information would have been protected.”

A recent release from WikiLeaks, dubbed “Vault 7,” revealed more concerning revelations about the CIA’s mass surveillance. A press release outlining the content of the released documents reveals that the CIA developed and used the capability to turn Smart TVs, iPhones, gaming consoles, Microsoft Windows PC’s, and vehicle control systems into spyware. The CIA also hacked into Skype, converted all conversations into text, which were then scanned and stored by the CIA.

Despite the severity of this revelation, several Clinton partisans ignored or used the leaks to confirm their biases against WikiLeaks. Many continue to allege that it serves as an arm of the Russian government or that it never releases any damaging leaks on Republicans—though WikiLeaks released the largest classified military leak in history from the Bush administration. Due to the Democratic establishment’s bias against Wikileaks for releasing evidence that confirmed criticisms of Hillary Clinton, the mainstream media has widely ignored Vault 7 and diminished its importance.

As dangerous as the Trump administration is, the establishment partisans cheering on the intelligence community are embarking on a self-destructive path that will undermine the constitutional rights of Americans. The Intercept’s Glenn Greenwald explained in an interview with Democracy Now, “The deep state, although there’s no precise or scientific definition, generally refers to the agencies in Washington that are permanent power factions. They stay and exercise power even as presidents who are elected come and go. They typically exercise their power in secret, in the dark, and so they’re barely subject to democratic accountability, if they’re subject to it at all. It’s agencies like the CIA, the NSA and the other intelligence agencies that are essentially designed to disseminate disinformation and deceit and propaganda, and have a long history of doing not only that, but also have a long history of the world’s worst war crimes, atrocities and death squads.” He added that this is who establishment partisans are cheering on to lead the opposition against the Trump administration, even as several mainstream media outlets, like BuzzFeed and Politico, publish articles that this deep state doesn’t exist.

During the 2016 presidential campaign, Hillary Clinton touted endorsements from several former intelligence officials, including former CIA Deputy Director Michael Morell and former CIA Director Michael Hayden, who are now appearing in the mainstream media to criticize Trump’s policies. Greenwald explained, “To urge that the CIA and the intelligence community empower itself to undermine the elected branches of government is insanity. That is a prescription for destroying democracy overnight in the name of saving it. And yet that’s what so many, not just neocons, but the neocons’ allies in the Democratic Party, are now urging and cheering. And it’s incredibly warped and dangerous to watch them do that.” 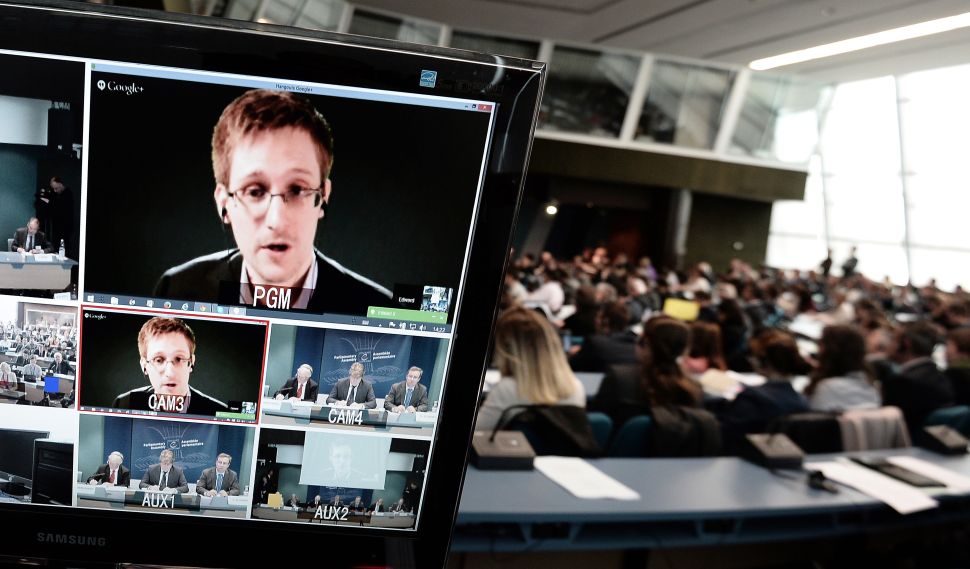