There’s a transformative quality about the drive from Miami to Key West. In between these two cities—each known for distinctly different styles of sun-soaked revelry—lies a drive that lulls even the most anxious soul into a placid state of serenity. Truth be told, it’d be a shame to lose that rare moment of ocean-induced zen.

That’s the allure of Oceans Edge Key West, a 20-acre property from the family-run Singh Resorts that opened its doors to the public in January 2017. The hotel is situated in Stock Island, one of Key West’s quieter neighborhoods that’s conveniently removed from the booze-and-cruise antics that accompany Duval Street in Old Town.

Stock Island—a less-than-one mile stretch of land named after the livestock that once populated the area—is largely home to fishermen and RV parks. But recently, the island has been quietly undergoing gentrification, with trendy new restaurants like Roostica replacing the ramshackle convenience stores of yore. Oceans Edge is the largest player in Stock Island’s reinvention, both literally and figuratively—land-wise, it’s the biggest hotel build in the Lower Keys to date.

To find it, you’ll have to wind through a few of Stock Island’s streets before stumbling upon the resort’s entrance on the outskirts. Classic Key West architecture is at play within Oceans Edge, combining Caribbean and Victorian influences like gingerbread moldings and white wood porches amongst palm trees and tropical fauna. The check-in building’s simple, warm décor sets the tone for the stay ahead. And your canine traveling partner is more than welcome to join, as the resort features a dog park and pet-friendly amenities.

There’s not a bad view in the house. All 175 guest rooms at Oceans Edge boast a porch or balcony with direct views of the ocean. The rooms are the most spacious in Key West—measuring between 380-1,020 square feet—each one boasting a clean, nautical aesthetic with driftwood lamps, tropical still life on the walls and plush beds featuring crisp white linens trimmed in navy blue. While room service isn’t available quite yet, the al fresco restaurant and oceanside bar, Yellow Fin Bar & Grille, is a short jaunt away and serves up fresh grouper, yellowtail snapper, made-to-order sangria and Oceans Edge signature eponymous cocktail with rum, guava nectar, edible pearl essence and blackberry brandy.

Six heated pools line the inner perimeter of the resort, so there’s no shortage of plush loungers and round canopied beds for soaking up the sun. Beyond the pool lies the resort’s marina—the closest U.S.-based marina to Cuba. There, pelicans perch amidst stunning yachts and charter boats waiting to take guests for an afternoon of diving in the Dry Tortugas or on a fishing excursion for daily catch.

If it’s dancing and a bit of tropical revelry you’re after, the eclectic nightlife scene in Old Town Key West is a mere 3.5 miles away. But honestly, why mess with some perfectly good zen? 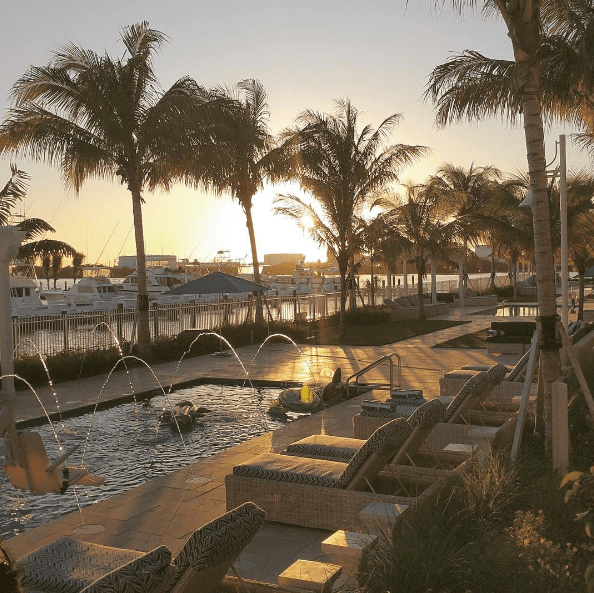