An appealing roughness borders every aspect of LoftOpera’s latest presentation, Rossini’s Otello. As with all their shows, what it may lack in sophistication it makes up for in sheer heartiness, like a big steaming bowl of minestrone.

The approach pairs surprisingly well with this 1816 opera seria, right down to the setting. This version of the story from beginning to end remains in Venice—birthplace of the hearty soup—unlike the Shakespeare and Verdi takes on the tale which include scenes in the colony of Cyprus.

It’s a concentrated and simplified drama, leaving plenty of room for extravagant arias and ensemble number carrying singers to the edge of virtuosity, and—occasionally in Saturday night’s performance—beyond.

One curiosity of this score is that the three leading male roles are all assigned to the tenor voice. Among this trio, Bernard Holcomb brought richness of tone and dramatic gravitas to the title role, and Blake Friedman offered a vast range and crisp, meaningful diction as an ambiguously malevolent Iago.

In the lengthy role of Rodrigo, rival to Otello for the love of Desdemona, Thor Arbjornsson took the biggest risks, almost always with success. If one or two of his highest notes sounded a bit screamy, he and Holcomb literally stopped the show with their second act confrontation scene. After the two tenors volleyed stratospheric high notes, landing well north of high C, the audience broke into applause and cheers suitable to a soccer match.

But for all their vocal fireworks, these three divos were more than a little overshadowed by soprano Cecilia López as Desdemona. More than adept at the coloratura passages in the role, including a thrilling interpolated high E-natural at the end of the second act, she made her greatest effect in the quiet and lyrical “Assisa a piè d’un salice.”

Even in this wistful Willow Song, López found light and shadow, varying the mood with a slightly harder, more bitter tone in the third stanza of the piece. But that was consistent with her take on the character from the beginning of the opera. Though Otello is generally regarded as the “outcast” of the drama, López suggested convincingly that, in rebelling against the rules of Venetian society, Desdemona is even more isolated than her husband.

She quietly overcame what is considered the biggest stumbling block for Desdemona in this work. Just before her big aria in the last act, she hears from a distant canal the voice of a gondolier intoning the words of Dante, “Nessun maggior dolore che ricordarsi del tempo felice nella miseria.”

There is no greater pain than to remember a time of happiness when in misery, he sings, to a melody which is pure distilled sorrow, and not incidentally, the best tune in the opera. López quietly appropriated the moment to apply to Desdemona’s tragic situation. As the heartbreaking  words unfurled, she simply glanced in the direction of the music and her eyes glimmered with tears.

So overwhelming was López in this part that it is not an easy task to define precisely the contribution of stage director John de los Santos to this opera. His work was not fancy, but he kept the action fluid and the groupings interestingly varied on the single white and gold set.

An aspect of the drama he addressed superbly was that issue of isolation from society, here represented by a sneering chorus in chic 1950s cocktail party garb.

Similarly no-nonsense was the music direction of Sean Kelly, who allowed or encouraged the cast to festoon the score with interpolations, but kept the orchestral sound lean and brisk.

In this context of Bushwick’s LightSpace studios, the non-theater LoftOpera invaded for this Otello, even thin string tone or occasional horn flub proved no more distracting than a stray bay leaf floating atop a bowl of minestrone. 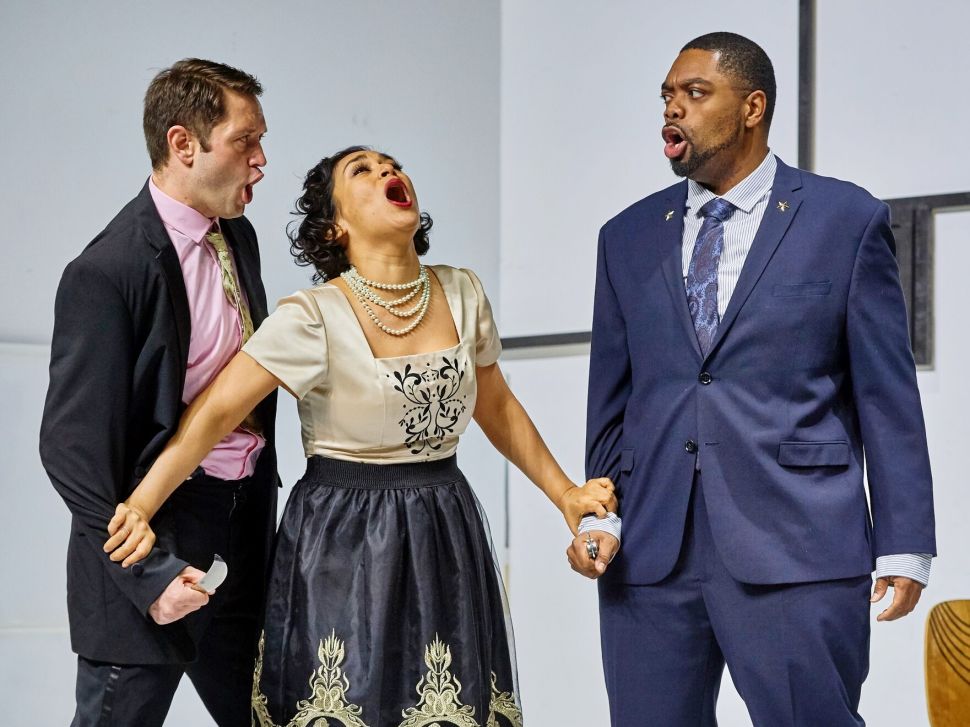