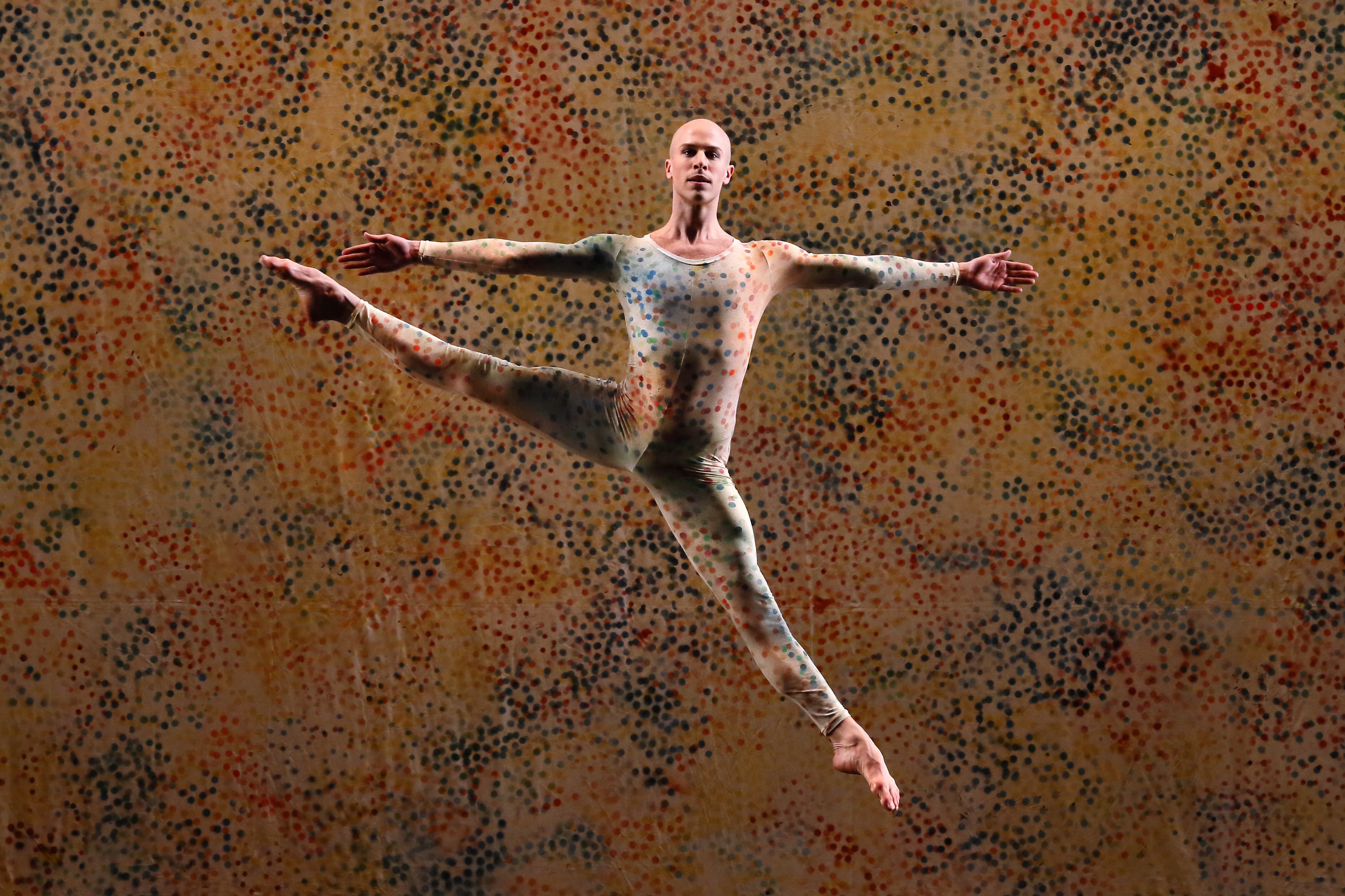 The Paul Taylor season, now in its third and last week at the Koch, reached a remarkable climax on Sunday, March 18, with a one-time-only performance of works by Martha Graham, Merce Cunningham, and Taylor himself—the first time these three giants of modern dance have ever been presented together in a single program. It was a fascination in itself, since Cunningham and Taylor both emerged from Graham’s company—talk about the anxiety of influence! And it resoundingly validated the decision Taylor made several years ago to expand his company’s repertory to include new works by current choreographers (Larry Keigwin, Doug Elkins) as well as works from masters of his own era, beginning with Doris Humphrey and, last year, Graham’s Diversion of Angels.

It was that ravishingly beautiful piece by Graham, created in 1948, that led off the triple bill in the finest performance I’ve seen of it since the heyday of Graham’s own company—fresh, relaxed, exuberant and moving; a considerable improvement over last year’s more cautious and tense rendition. With this performance alone Taylor repaid Graham for everything she did for him—not just featuring him in her company but encouraging him when he broke away. (She understood—she understood everything—that Paul Taylor had to be his own master.)

Diversion features three couples and a small corps. The girl in yellow—a rhapsodic Eran Bugge—is young, carefree; the girl in red, Parisa Khobdeh at the peak of her mature powers, is passionate, a flame; the girl in white, majestic Laura Halzack, is balanced, in control, her love a mature one. Their three partners—Michael Trusnovec, Sean Mahoney and Michael Novak—matched their women in strength and feeling. This is a dance that Taylor knows well, and now his dancers know it too. He’s passed the torch.

Merce Cunningham’s Summerspace, like Diversion, has been performed by at least one ballet company—New York City Ballet, back in 1966, and on pointe. (What struck me most forcibly back then was the amazing pointillist backdrop and costumes by Robert Rauschenberg.) Since there is no longer a Cunningham company, Taylor imported the Lyon Opera Ballet to perform it, and they were superb—light, elegant, unfazed by its technical demands: the two men, Tyler Galster and Raúl Serrano Núñez, dispatched the fiendishly difficult jumps with no sign of strain, and the four women were splendid too. I’ve always had a problem with Cunningham’s esthetic, but the audience had no such problem. They cheered and cheered, just as they had cheered Diversion of Angels.

And just as they went on to cheer, even more vociferously, Taylor’s glorious Promethean Fire, created in the wake of 9/11. Paul Taylor knows how to hold his own in the best of company: Promethean was the perfect closer as well as the perfect climax. Yet nothing in the evening suggested a competition. Three great choreographers, linked by history and, despite the differences, a profound artistic bond, displayed American modern dance at its finest. And, as I say, validated Taylor’s hope of opening up his company to other voices from the art form to which he has devoted his life. 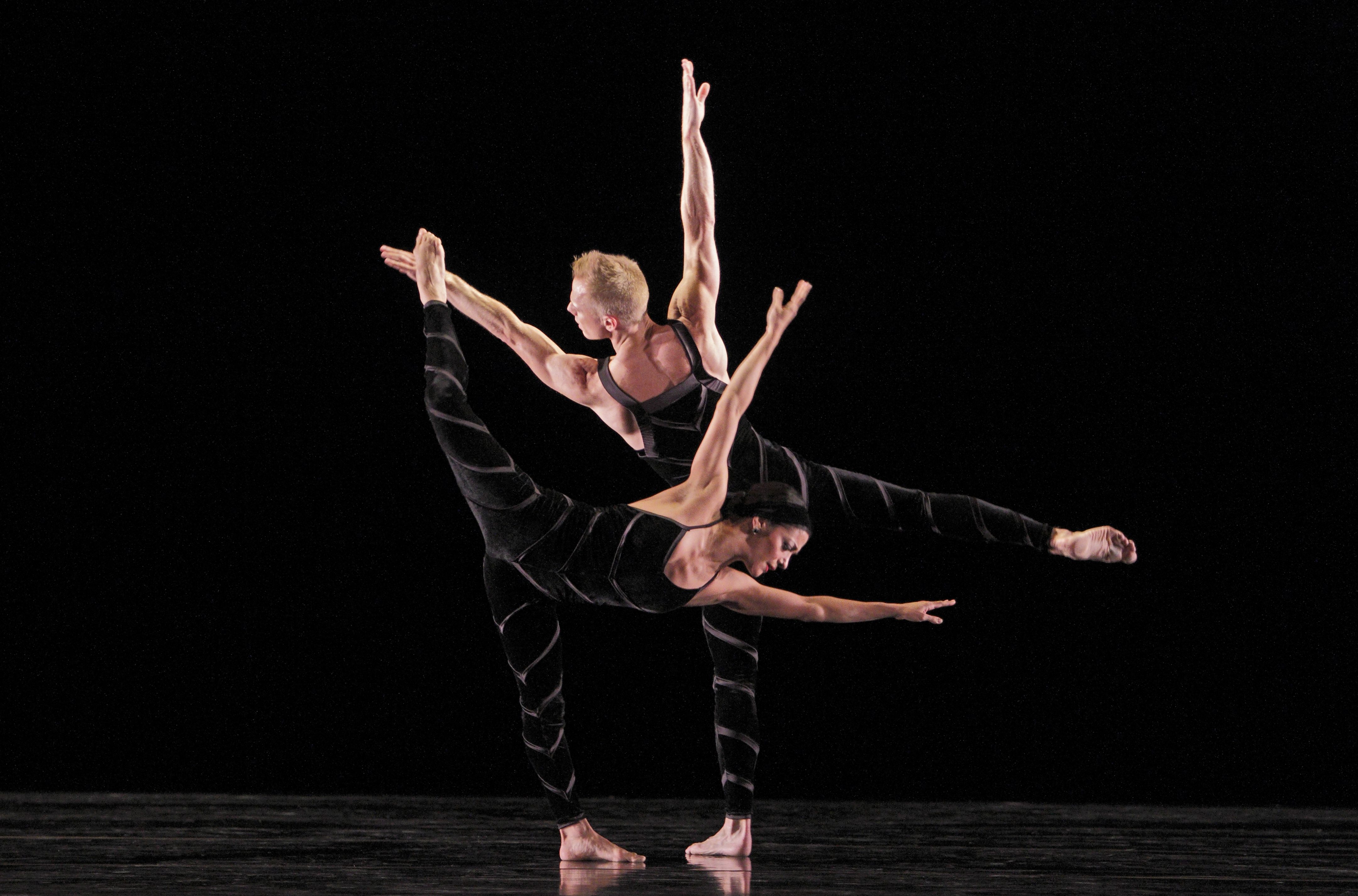 As for the rest of the Taylor season, it featured many of his masterpieces, including Esplanade, Airs, Syzygy and Company B. These are works that like all masterpieces reveal new aspects of themselves every time you see them. This time round, I found myself especially engaged by the wonderful arrangements of the Andrews Sisters recordings in Company B—and of course by the Sisters themselves. No wonder they were the most successful of all girl groups—they’re the best of all girl groups. (Eran Bugge, whom I admire greatly, is not, I have to say, the ideal “Rum and Coca-Cola” girl; she’s charming, she’s appealing, but she’s not a Latin bombshell.)

The newest girl sensation is Madelyn Ho, one of those performers who seems to be dancing full out even when she’s standing still. She’s a fury, she’s a ball of fire, she’s a hoot—not unlike Lisa Viola, into whose roles (like the central figure in Syzygy) she’s effortlessly sliding. There’s an even newer girl, Kristin Draucker, of whom we got barely a glimpse, but a glimpse was enough: she’s a real American Beauty.

The season saw the New York premiere of Continuum, by a fondly remembered Taylor ex-dancer, Lila York. It was respectable, even admirable, but it was unnecessary. And as always, there were two new pieces from Taylor himself. One of them, Ports of Call, is a harmless sketch. The other, The Open Door, is far more ambitious and interesting. Daringly, Taylor has used music very well known to ballet-lovers, Elgar’s Enigma Variations, to which Frederick Ashton created one of his finest works. Like the Ashton piece, Taylor’s invites us to a country house party. But whereas Ashton’s work tells a complicated and moving story, Taylor’s presents an ambiguous situation. 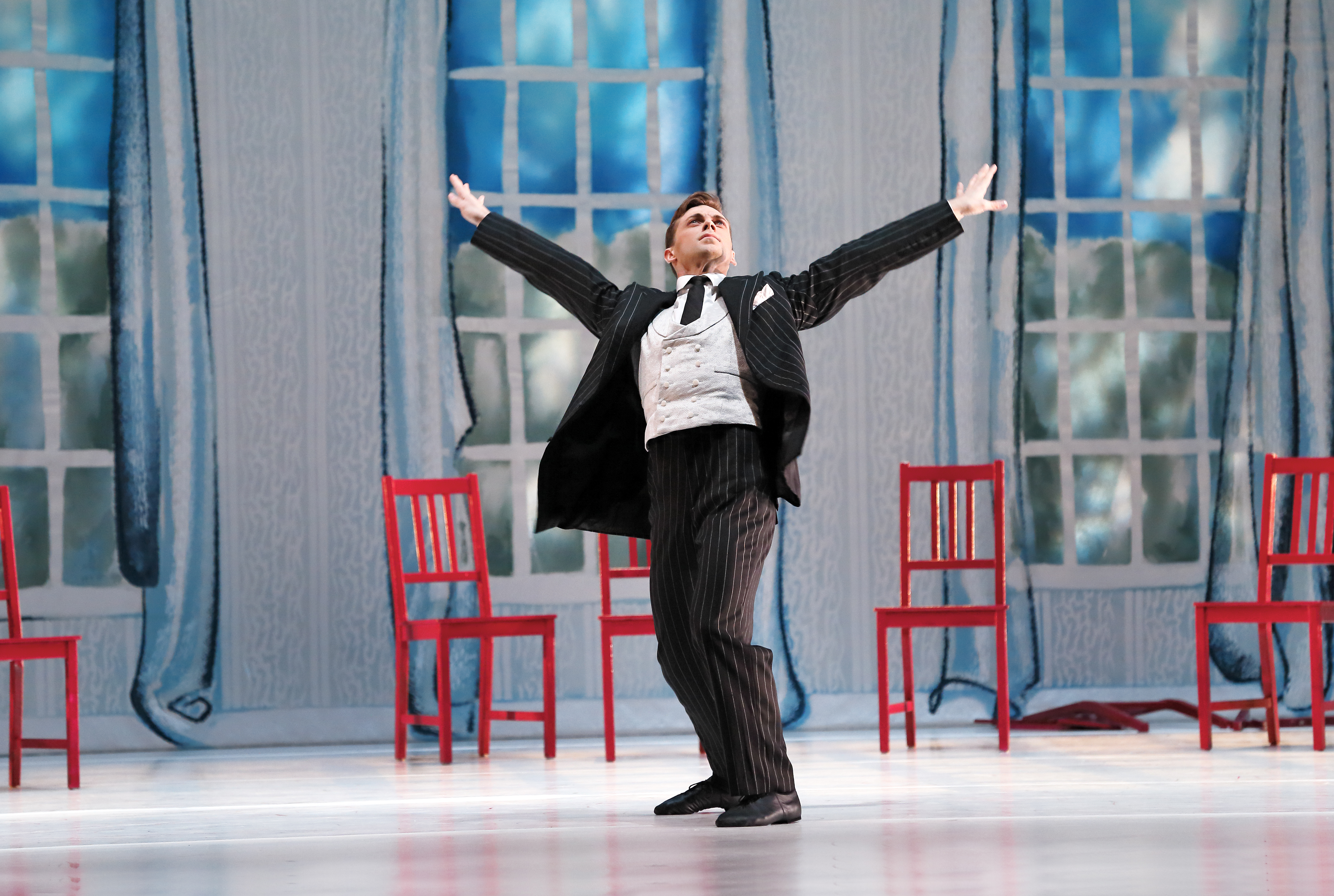 Michael Novak in The Open Door. Paul B. Goode.

A young man, the Host, is fussing with a group of chairs in a semicircle clearly arranged so that a small group of guests can observe some kind of performance. The guests begin to arrive through the open French doors of William Ivey Long’s elegant drawing room—we see a verdant landscape through the windows. They’re a disparate bunch: a sporty lad; a dandy; a grande dame (beautiful Halzack hidden in a grotesquely fat costume and barely able to stand—she breaks the first chair she sits down in); a naïve young girl with a paint brush and an easel; a young man in uniform, etc. The entertainment begins—but it’s the guests themselves who are the entertainment. Singly or in pairs or groups they act out their passions or peculiarities, some of them highly original, others verging on cliché. And then they all join in a dance together, in a beautiful passage that reminded me at moments of Balanchine’s sublime Liebeslieder Waltzer. And then they wander off through the Open Door, and the Host is left to rearrange the chairs—and to ruminate over what has happened.

What’s remarkable is that although Elgar wrote 14 variations, Taylor made the decision to use only the first ten, so that he could end with a long quiet solo for the Host that is deeply suggestive without being literal. Something has happened—to him and to us—but what it was remains an enigma. Unless we choose to regard this piece as a valediction: Paul Taylor looking back on the vast array of characters he has invented for us throughout his amazing career.

Tellingly, he has cast the company’s finest young dancer, Michael Novak, in the role of the Host, and Novak gives a wonderfully modulated, un-showboaty performance. At last there’s someone on hand to follow in the footsteps of the great Michael Trusnovec, if he ever betrays us by retiring. 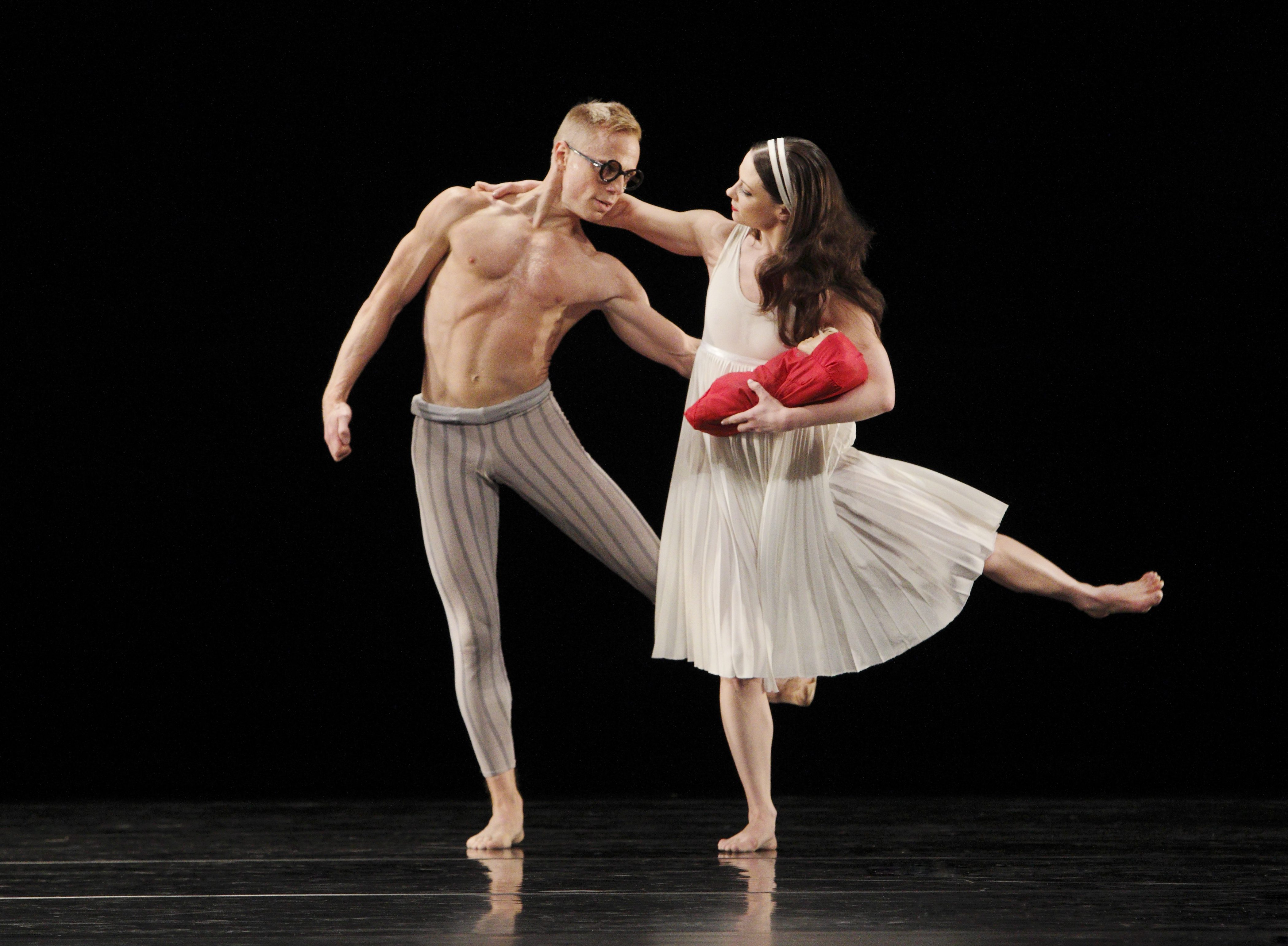 Every Taylor season somehow makes me re-concentrate on a single major work. This year it was Le Sacre du Printemps (The Rehearsal) set to the two-piano version Stravinsky made of his astounding score. When I first saw it, back in 1980, it was so unexpected, so original, so bewildering that I at least (who loved it) could only try to grasp the concept—to understand what Taylor was telling us with this comic-book take on the convulsive Nijinsky original with its frightening sacrifice of The Chosen One. Here we had cops, gangsters, a kidnapped baby, a dominatrix, prison bars, a stabbing, jokes—huh? Except that the concept clearly worked.

Today, 37 years after its startling premiere, I found myself forgetting about the concept and the plot and focusing entirely on the miracle of the dance invention. There isn’t an empty, generic or forced moment—everything is inspired by the music, exquisitely and without strain; everything is so organically right you’re hardly aware of its rightness. It’s like so many Balanchine ballets in this regard—Concerto Barocco, say, or Divertimento No. 15. In other words, perfect.

By some demented stroke of synchronicity, earlier today I finished reading Part Real, Part Dream: Dancing with Martha Graham—a riveting memoir by Stuart Hodes, who has spent a long lifetime dancing for, supporting, and worshiping Graham. A few pages from the end of his book he writes, “I shocked two young Graham adherents … when I said that in my opinion the greatest single dance created in the twentieth century is Paul Taylor’s The Rehearsal.” Before this Taylor season I would have been beyond skeptical, and I still don’t agree. But now I can understand where he’s coming from. 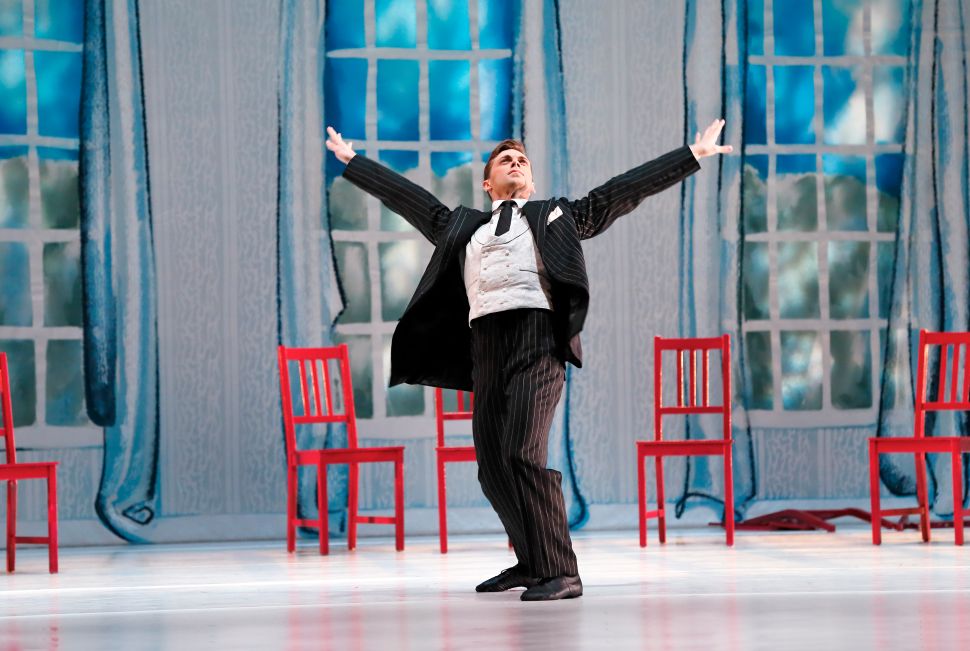