Steven Universe is an important show for so many reasons: Its inclusiveness of queer identities, its body positivity, the way it raises issues of consent; hell, it even talks about the importance of mindfulness. You could go on and on. You could even point out many Foucauldian aspects about the show. Try and tell me Crystal Gem culture isn’t a great example of biopower!

But I don’t want to talk about any of these things. Instead, I want to try and figure out if I should hypothetically date Pearl of the Crystal Gems.

We all know it is possible to be sexually attracted to a cartoon.

I used to be (and always will be) in love with Megara from Hercules. I mean that smoky voice, those hips, the wavy hair with a single straggling curl hovering over those Cleopatra eyes. Most people also have a crush on Peter Pan at one point in their lives. It’s hard to not like a guy in tights, but once I realized it was just about the tights, I decided we would just be friends.

I am not afraid to admit that I am excited by Pearl. If I could somehow pull her out of my television, make her three dimensional, and enchant her enough to bring me to the plateau stage, I have no doubt we would both achieve orgasm. Afterwards, she would make me tea and tell me about the interworking of the cosmos. Pearl would peck my ear with her triangle nose. With her bird voice she would say, “Emily you are so lovely.” My middle ear would tingle, and I would praise her for her perfect symmetry and thank her for the world’s most perfect eggs. Then I would tell her she should make ASMR videos. She has the voice for it. We could start a business.

The evening would begin at a restaurant. This restaurant would have comfortable chairs, which would enable me to focus completely on Pearl, and not on the fact that I am sitting directly on my tailbone because I don’t have a butt. I would order French Onion Soup but request that they not put any cheese on top because I wouldn’t want to have to break open a Lactaid. If you break a Lactaid out on the first date, you are associated with bowel movements for life. This is not the worst thing to be associated with, but it is also not the best.

Then I would take her to the Cubbyhole, but it would be too crowded and I wouldn’t be able to hear her soft voice. She would sense my discomfort, take me by the hand, and we would weave our way out of the crowd. Then I would remember since it’s Friday, Hot Rabbit has parties. In fact, if you get there before midnight and whisper the secret password, you can get in for free. We would arrive at 12:01, and sheepishly say “Willy Wonka?” The cute lady with the pixie cut who stamps your hand would say, “ Don’t tell anyone, ladies,” and wink.

I don’t dance because a guy named Mike at a Bar Mitzvah once told I was “a weird dancer,” and I have not been able to get rid of the mental block. Pearl would understand because she also has problems with self-esteem. I would lean against the bar and watch Pearl dance. She would watch me watch her. She would eventually get me to dance by fusing with me, and it would be the first time I have danced since that Bar Mitzvah. After dancing we would un-fuse. We would walk back to my apartment, talking the entire time about, oh, the Crab Nebula, Kinsey, the Hitchhiker’s Guide to the Galaxy, our greatest hopes and fears, and how my roommate used to keep her tampons in the freezer.

When we get to my front door, Pearl would cup my chin and I would say, “Can I breathe inside your mouth?” She would laugh, and I would go in for the kiss and accidently kiss her teeth. She would laugh even more and fall onto the sidewalk (because Pearl is not used to being in a three dimensional world). I would ask her if she is okay and she would continue laughing. I would say “What?” and She would say, “That kiss.” I would pretend to be really ashamed. She would come over to console me. I would pull her in like a real pro and pretend the entire thing was a trick (which, subconsciously, it very well might have been). Then we would go up to my apartment.

But which Pearl would I wake up to the morning after?

Something about a prospective relationship with Pearl from Steven Universe deeply concerns me. Through examining the show, can I determine whether or not Pearl is capable of having a healthy romantic relationship? And if she is, why I am so terrified of her? What does that say about me? I, too, have experienced that Rose Quartz obsessive love, and usually, it’s not even about the other person; it’s about my personal abandonment issues. Who abandoned you, Pearl?

I have to examine Pearl’s all-consuming obsessive romantic love for Rose Quartz. How do I feel about the all-consumed-dependent-on-Rose-for-a-sense-of-purpose Pearl? If I dated Pearl, would there be a point where she’d transform from charming maternal neurotic Pearl to scary kidnapping Steven and trying to break through the atmosphere in a makeshift rocket neurotic Pearl (i.e. the Space Race episode)? Because you really should think about these things.

Also, it has been years since Rose got together with Greg. Years. Am I cold hearted for thinking she should have processed this by now, or am I just not a romantic? Maybe I just see romantic relationships as slow mutual degeneration.

I was so pleased to see Pearl wearing a top hat and finally processing Rose’s rejection of her while singing “It’s Over, Isn’t It?” (season 3, episode 8, “Mr. Greg”). I mean that is some really dapper processing. But let’s look at this scene a little closer. Isn’t it a little weird when you think about how much time has passed before she got to this emotional point? It took Pearl this long to realize a relationship with Rose Quartz was not going to happen, even though Rose has been dead for years (yes, she gave up her physical form; since I do not believe in souls, much less the transmigration of souls, I equate this to death.)

Maybe Pearl just hasn’t found herself yet (not that you ever really “find yourself,” because identity is in flux). I think she is getting there though. I mean that “Last One Out of Beach City” episode, when pearl flipped her collar up, I cooed. Sure she hit on a punk Rose knock-off (otherwise known as mystery girl), but she is putting herself out there, you know? I think maybe like, at least she’s trying to grow. So many people don’t even try. So yes, I think I would date Pearl from Steven Universe. 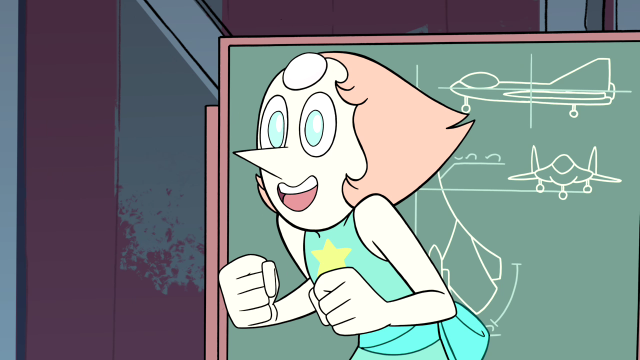