Many sound bites reverberated throughout the 2016 presidential elections—like Hilary Clinton’s claim that “women have always been the primary victims of war.” Although, this wasn’t actually stated during the campaign, but rather in 1998 at the First Ladies’ Conference for Domestic Violence in El Salvador. It has since been passed as a resolution by the UN Security Council, and I was reminded of the statement just last week, on International Women’s Day, when the spineless Prime Minister of Australia, Malcolm Turnbull, saw fit to continue this narrative, proclaiming “women are disproportionately the victims of war.” Each time I’ve heard this, one question immediately runs through my mind:

Are you fucking kidding me?

Now, I’m certainly the last person to take offense at the things people—especially politicians—say, but this had me fuming. Oftentimes, we hear things that are so ridiculous, they’re funny. This goes past that point. It is the worst kind of cynical, pandering bullshit, because even if we are speaking only of the 20th century, it cheapens the sacrifice of millions of men for the purpose of scoring political brownie points with the feminist crowd. And the fact that no one in the mainstream media stood up to such a ridiculous remark is an utter dereliction of duty.

There is no doubt that women suffer during war, but to call them the primary victims—or say that they suffer disproportionately—isn’t a different perspective. It’s a lie. In the major conflicts of the 20th century, women were for the most part at home in relative peace and security, while men were on the front lines. Women certainly did have to pick up the pieces, make a life for themselves and care for their children, but it was the men who were killed. So here you have yet another attempt to minimize the suffering of men, while placing women at the top of a hierarchy of perceived oppression.

This isn’t just about the fact that men died by the millions in the wars of the 20th century, either. They were subjected to some of the most horrific battlefield conditions—the kinds of death one wouldn’t wish upon his worst enemy. The way men were sacrificed by their superiors by tens of thousands at a time made them little more than cannon fodder in a number of conflicts. And then there is the personal stuff, the real nitty gritty parts of war that you don’t see on the news or hear about in history class because it’s just too horrific and graphic. Have a listen to Dan Carlin’s excellent Hardcore History podcast, and you’ll hear the stories of war that don’t make it into textbooks:

The men who died choking on chlorine gas in WWI.

The men who fell into shell craters, couldn’t get out because the mud was so deep and slimy, and begged their comrades to shoot them before they drowned from the rapidly rising rain.

The men who were stripped naked during the Russian winter and hosed down, left to die on the road. The soldiers who found them wondered why there was ice on the road, only to see dead faces staring back at them.

The men who were so battle fatigued from the constant artillery of WWI that they couldn’t go on and were shot for cowardice.

Men, like my grandfather, held as POWs in places like Changi, who—if they were lucky—walked out as skeletons.

The men in Russia, sent forward in waves without rifles, instructed to pick weapons off the dead.

The Japanese on Iwo Jima, left alone without support to hold the Allies off as best they could. They were expected by their leadership to die to the last man.

Men attempting to retreat from the front lines of a number of conflicts, clutching the innards that spilled out of their abdomen.

The Battle of Verdun during WWI saw roughly 750,000 casualties during its 299 days. That’s an average of 70,000 men a month—all under the most horrific circumstances. It was possibly the closest we’ve ever come to hell on earth. The Battle of Stalingrad in WWII saw well over a million and a half casualties. During the Eastern campaign, the soldiers of the German army weren’t even equipped with winter clothing, because the high command didn’t want them believing it would be a protracted, drawn out fight. They fought in the middle of the Russian winter—one of the coldest places on Earth—in summer uniforms.

And this is to say nothing of what many men go through when they return home from war. How many injured veterans were left to rot in appalling conditions in VA hospitals? Born on the Fourth of July is only a snapshot of the misery many had to endure. Society and government tells men that they need to be heroes—but when they come home, wounded and broken, they’re treated worse than stray dogs. The high suicide rate of ex military members is incredibly concerning, and has finally received some recognition via social media.

There is also the fact that most men have zero desire to go to war. Throughout the 20th century and history in general, while many young men joined military forces in search of adventure and heroics, many more were conscripted against their will. When England ran out of soldiers during WWI, the white feather campaign was instituted, whereby men who had not enlisted were shamed into doing so by women who put white feathers into their jackets in public. Women took to the campaign with such gusto that even young teenage boys and soldiers who were home on leave from the front lines found themselves presented with the feathers. A particularly galling example was when one was presented to Seaman George Samson who was on his way in civilian clothes to a public reception in his honor. Samson had been awarded the Victoria Cross—the highest honor in England—for gallantry in the Gallipoli campaign.

Many men have gone to war simply because they felt it was their duty. Because the world or their way of life was in danger, their families had to be protected, and because they were men—and that’s what men did. So to hear pandering politicians cheapen their memory and sacrifices and make it about women’s struggles? It’s dishonorable and unforgivable. At least when Hillary Clinton did it, she was the First Lady. For a Prime Minister of Australia to say it—especially when so much of our national narrative is about the sacrifices of our soldiers in the conflicts of the 20th century—shows he is more than happy to trade principles for a boost in opinion polls.

For any other politician who feels like selling out the sacrifices of their soldiers in an attempt to make themselves popular with the feminist left: just don’t. 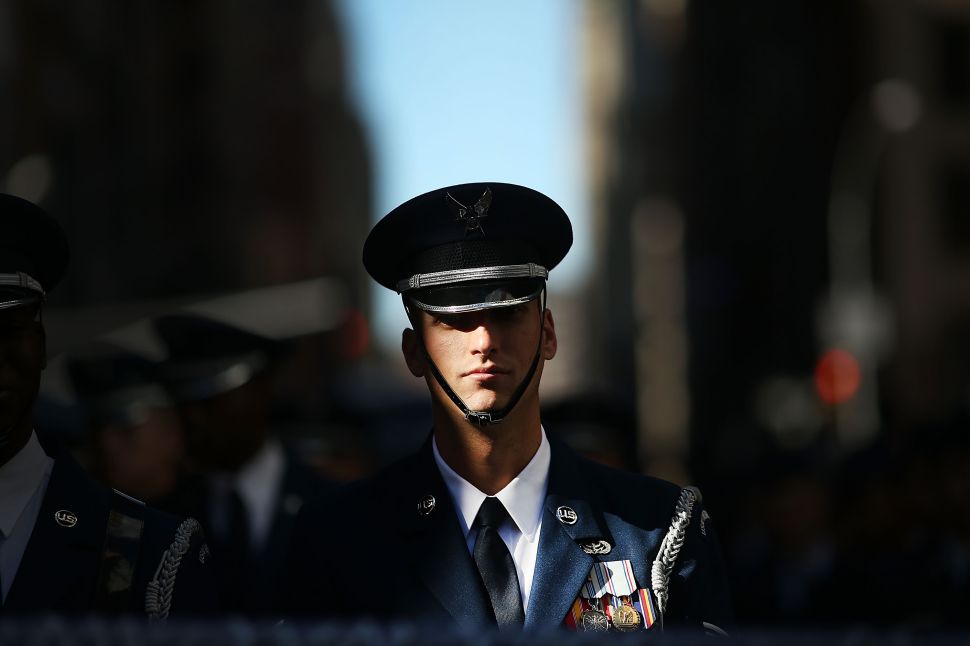