A few hours before her eponymous program on MSNBC, Rachel Maddow tweeted shocking news: “We’ve got Trump tax returns.” The host would reveal them later that night on her show.

Whoa! The thing Democrats (and many Republicans, of both the pro- and anti-Trump persuasions) called for during the election would be released! Finally, we would learn that Democrats—including then-presidential candidate Hillary Clinton—were right all along in saying the President Donald Trump paid no income taxes.

Maddow could have released the documents she had at the beginning of her show and spent the rest of the time analyzing every line. But, no—in true Maddow fashion, she wandered through trivial information about taxes, teasing viewers that what she had would blow their minds. What she revealed, however, was two pages of Trump’s 2005 tax returns, which showed he paid $38 million in taxes on $150 million in income. In other words, Trump paid 25.3 percent of his income in taxes.

That’s a higher rate than what Maddow’s beloved former President Barack Obama paid in 2015 (his rate was 19.6 percent), what alleged socialist and multiple homeowner Bernie Sanders paid (either 13.5 percent or 19.6 percent, depending on who you ask) and even Comcast’s average tax rate (24 percent, though that seems debatable). For additional perspective, nine current and former MSNBC pundits have had tax liens filed against them.

Some have pointed out that Trump paid more than former presidential candidate Mitt Romney, who was incorrectly reported to have paid less than 13 percent in federal taxes. Those who reported this ignored how Romney made most of his money and the fact that his money was actually taxed twice, meaning his rate was actually closer to 30 percent.

Even before Maddow got around to revealing the two pages she had, the White House released the crucial information from the returns. The Wall Street Journal published the information from the returns just a few minutes into Maddow’s show (the post has since been updated, which is why the time doesn’t match up anymore). The Daily Beast also published the information, since the document came from contributor David Cay Johnston. The Beast, however, embarrassed itself with its un-bylined article by trying to claim Trump paid just 4 percent in regular income taxes.

“The documents show Trump and his wife Melania paying $5.3 million in regular federal income tax—a rate of less than 4 percent,” the article states. “However, the Trumps paid an additional $31 million under the alternative minimum tax, or AMT. Trump has previously called for the elimination of this tax.”

The separation of these two taxes in order to make it look like Trump paid just 4 percent in income tax led to mockery from tax experts and even members of the mainstream media.

John Kartch, the vice president of communications for the right-leaning Americans for Tax Reform, tweeted a joke “statement” from the organization, which was just a picture of Geraldo Rivera in front of Al Capone’s vault, an infamous television moment in which Rivera, like Maddow, teased a big reveal for almost an entire program only to reveal nothing.

“The AMT is part and parcel of the income tax. It’s what people pay when their regular tax calculation gets too low,” he said. “Income tax liability is clearly the higher of regular tax and alternative tax. Everyone who knows tax knows that.”

He added that taxes are calculated two separate ways for affluent people: Under regular rules and AMT rules. The higher of the two is what the taxpayer pays. If you need further explanation on how the AMT works, Forbes has a good explainer.

Kyle Pomerleau, director of federal projects at the more independent to right-leaning Tax Foundation, also put out a seven-tweet explainer on the AMT, adding it was “really hard to tell what is going on from two pages.”

Chris Cillizza of Washington Post called the tax return “a total nothingburger.” But it’s not really a “nothingburger.” The returns show that Trump made millions of dollars in 2005 and paid 25.3 percent of his income in taxes. That takes away the Democrats’ 2016 talking point that Trump may have paid no taxes for decades. They are now telling each other not to get “distracted” by Trump’s taxes.

It should be noted that the AMT was created by Democrats and is something they continue to defend, though they keep having to come up with ways to keep it from hitting the middle class. Trump has previously said that he planned to repeal the tax, which begs the question: Does Trump want to repeal the AMT so that he would have only had to pay 4 percent of his income in taxes, a rate much lower than most other taxpayers?

For the answer I went back to Ellis, who explained that the AMT could never be repealed in a vacuum (Democrats wouldn’t allow it, and the GOP would likely make many concessions, such as removing multiple exclusions, deductions and credits for the high-income taxpayers). He added that repeal of the AMT could also change the wealthy’s ability to deduct the net operating loss (something it appears Trump deducted in 2005).

“So you can’t do an apples-to-apples like that,” Ellis said. Without the AMT, Trump may pay less than a 25 percent rate, or he might pay more.

What could be interesting from Trump’s tax returns is whether he’s worth as much as he says he is. It looks like he wrote off $100 million in business losses in 2005, something that is perfectly legal and also something Democrats would have a hard time trying to repeal in order to make Trump and other business men “pay their fair share.” The New York Times, predictably, framed it this way: “By claiming losses, Mr. Trump apparently saved millions of dollars in taxes that he would otherwise have owed.”

Go ahead and run with that, guys. Go ahead and tell people who lost millions (or even just thousands) that they should pay taxes at a higher rate as if they hadn’t just lost money.

The story could also have been speculation about whether Trump loses money each year on his assets, prompting questions as to whether he is really the slick businessman he claims. It would be a wonky discussion, however.

Further, it looks like Trump may have played the media by releasing his own tax return, since the document shown on Maddow’s show had a stamp that read “Client Copy” on the bottom. For conspiracy theorists, this might lead to questions as to why 2005 was chosen, instead of a more recent year. Were those two pages from his 2005 return the most positive they could find going back decades?

This theory may not hold as the Washington Examiner’s Tim Carney explains. “Client Copy” could just mean the returns came from someone whom they had been provided to previously, like the reporter Trump sued for claiming the businessman wasn’t worth as much as he claimed. 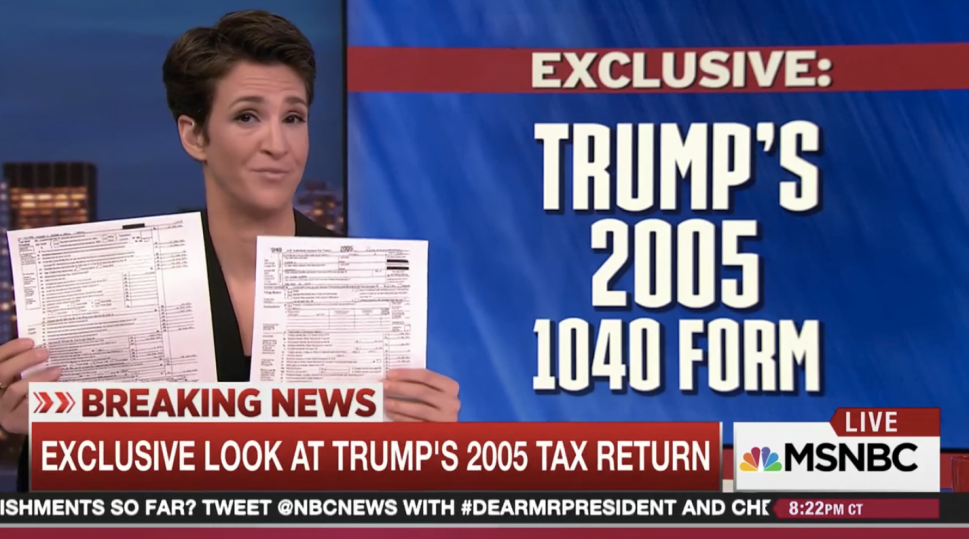