A week after MSNBC’s Rachel Maddow shamelessly helped President Donald Trump by baiting thousands of people into watching her show only to release his 2005 tax returns that showed he paid taxes, the she mislead her viewers to manufacture outrage and boost her ratings yet again.

During a segment that aired on March 21, Maddow claimed “an huge industrial sized bot attack” occurred on social media in Sen. Bernie Sanders groups and pages. She provided no evidence to corroborate her dramatically quantifying it a “huge industrial size.” Already, it’s evident that Maddow will sensationalize the issue. “They used automated bots and what appear to be paid operatives from Russia and other countries,” she said. Notice her use of “what appear to be”—she does not have evidence that corroborates her claims that any Facebook accounts that look fake are Russian.

Maddow regurgitated the talking points from a recent Huffington Post article that sensationalized evidence of fake news websites in Sanders groups to create a narrative that Russian trolls were infiltrating the groups. In reality, the content on these fake news websites wasn’t fake; they republished articles from other news outlets for profit. Maddow noted that Sanders group administrators posted to tell members not to share click bait websites, as these fake news websites often sensationalized their titles to lure in more page clicks. Other Facebook groups and pages weren’t immune from these clickbait websites and the Facebook profiles they used, but she only discusses Sanders’ groups.

Maddow cites that some of the fake news websites were linked to Macedonia. However, she fails to mention that NBC News and other media outlets reported in December 2016 that a Macedonian teenager made $60,000 running a fake news website during the election. Though this is an important fact to mention in the story, Maddow omits it because it ruins the narrative she is trying to weave that the Russian government hired people to infiltrate Facebook groups to amplify criticism of Hillary Clinton.

One of the most widely distributed lists of clickbait websites that Sanders supporters posted in groups cited Politicus USA, which also happened to publish a fake news story about Maddow’s claims that Bernie Sanders’ page was a Russian government led operation. “Rachel Maddow Exposes Fake Russian Bernie Sanders Page,” its title read, and it has over four thousand likes on Facebook. Other websites on the list of clickbait websites have also propagated fake and sensationalized pro-Clinton narratives, like Daily Newsbin. Maddow ignored this fact, because it didn’t fit into the sensational narrative she was creating for her story. BuzzFeed published a report in October 2016 that hyper-partisan media outlets were publishing fake and misleading news at alarming rates. Sanders groups were far from the only target of these hyper-partisan stories. Many of these hyper-partisan media outlets focused their content on hyperbolic attacks on their political opponents, rather than report on the rift within the Democratic Party. Yet, Maddow nit-picked evidence of those hyper partisan fake websites and fit them into a narrative in which she asserts that the Russian government was responsible. 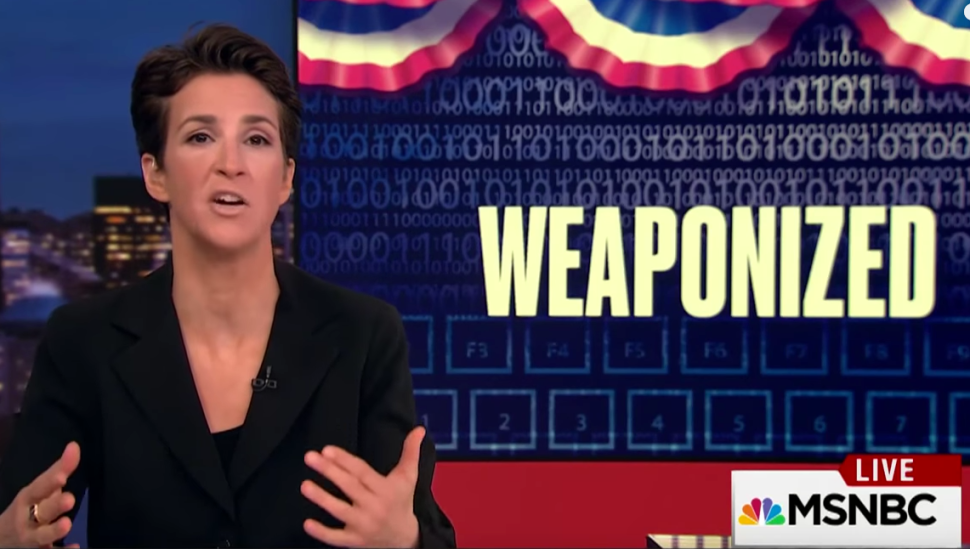