I am a proud American-Israeli feminist woman, an eager stakeholder in our freedom, rights and future. It is my obligation to not remain silent as our movement is hijacked.

One (large) segment of the feminist movement is plowing toward the edge of a steep, treacherous cliff.

Despite the good-intentioned inclusion of various political organizations in the January Women’s March on Washington and International Women’s Day, many were also excluded.

More moderate voices, and anti-abortion groups (with the exception Islamist organizations, like CAIR), were not welcome. At the Oppression Olympics, only the loudest and most extreme points of view could compete for attention to their causes. I say this as a pro-choice woman who understands that now more than ever, in order to succeed, women’s rights must remain a bipartisan issue with multiple, consistent entry points.

Many chose not to participate over concerns about the direction this movement is headed—in part thanks to some problematic yet prominent organizers. Iris Breidbord Langman, an Israeli-American and active member of the Seattle Jewish Community, did not attend the Seattle Women’s March for this very reason.

“I will have nothing to do with a movement that allows its mission to be hijacked by those who contradict the real message and whose sole purpose is to spew lies and hate,” Langman said, referring to Rasmea Yousef Odeh, an International Women’s Day organizer and the mastermind of a murderous terrorist attack against an Israeli grocery store in 1969. Odeh’s attack murdered two Jewish students, just 20 and 21 years old. Two mothers and four sisters buried their sons and brothers.

I am not convinced that Odeh would have welcomed me at the march. For a movement that goes so far to ban organizations that don’t align with their own political beliefs, what’s to say they won’t boycott Israelis like me?

An organizer of the January march, Palestinian-American Linda Sarsour, is an outspoken advocate of the Boycott, Divestment, and Sanction (BDS) movement against Israel.

“Sarsour supports BDS against Israel. She has ties to Hamas, a terrorist organization that seeks the destruction of the State of Israel and the Jewish people. The hijacking of the Women’s March by an anti-Israel, anti-female, pro sharia law promoter shows the hypocrisy of the march,” Langman said.

Langman was “deeply offended and disturbed” by one of Sarsour’s tweets from 2011, in which she said, “Brigitte Gabriel= Ayaan Hirsi Ali. She’s asking 4 an a$$ whippin’. I wish I could take their vaginas away – they don’t deserve to be women.”

Indeed, Sarsour’s call to “take their vaginas away” was a low blow considering Hirsi Ali, an outspoken champion of women’s rights in Islamist societies, was forced to suffer female genital mutilation under Somalia Sharia law when she was five years old.

As Langman explained, “Claiming that Sarsour is for social justice, women’s rights, and equality is dangerously ignorant and minimizes the message of those who suffer under sharia law and terrorism.”

And Sarsour didn’t stop there. The next year, she tweeted that “nothing is creepier than Zionism.” But there is, in fact, something much scarier at play: organizers driving a movement toward their own hostile agendas against Israel and, yes, Jews.

The International Women’s Day website states that organizers support the “decolonization of Palestine.” Of course, a land’s native people cannot “colonize” that which is their own historical land—but this inaccuracy has already spread to the marches, which often resemble anti-Israel demonstrations.

With anti-Israel posters and chants, the movement has become the new U.N., with Israel is singled out as a violator of justice. In her address to the Women’s March on Washington, Angela Davis called for freedom and justice in the U.S.—and of all the violators of women’s rights she could have conjured (Saudi Arabia, Somalia, Pakistan, Syria) Davis named the West Bank and Gaza. We can only hope she was demanding freedom from honor killings, child marriages, polygamy, religious persecution, or the torture and murders of LGBTQ activists in the Palestinian territories. But this is doubtful.

If I were charged with the responsibility of driving this feminist car, I’d pay more attention to the road.

Eliana Rudee is a fellow with the news and public policy group Haym Salomon Center. Her bylines have been featured in USA Today, New York Daily News, Forbes and The Hill. 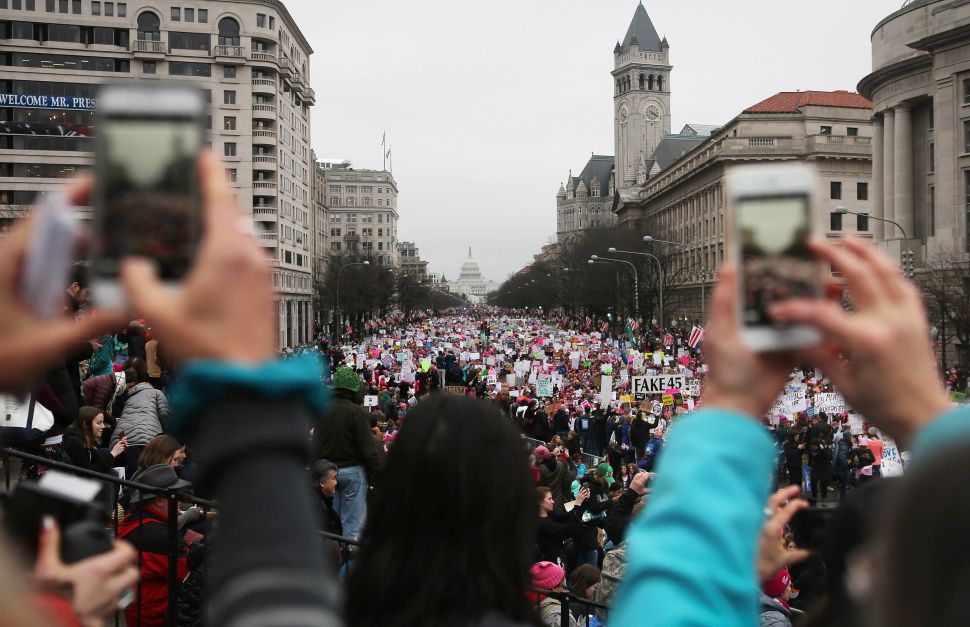