In the final gallery of “Adios Utopia,” there’s a video of a march through Havana. The marchers are dressed for carnival, but in black instead of in colorful costumes, and they are marching backward, to the music of a brass band. The performance, Irreversible Conga (2012), a work by artists called Los Carpinteros, is suggesting that Cuba is going backward.

The gesture fits the title of the exhibition which will be at the Museum of Fine Arts Houston through May 21. Some artists simply fled the island utopia. Some left after persecution for their work. Some stayed and expressed their views about life on the island through their art. Some are still being persecuted. That experience has kept the artists in this show from preserving a sense of humor.

Discredited for many as a utopia, Cuba is hot as a destination now, and as a source of art, although probably not as hot in Houston as in New York or Miami. Like it or not, you’ll have to travel to Houston to see the most comprehensive exhibition of Cuban contemporary art on view today.

“Adios Utopia” will win plenty of friends for these intrepid Cuban artists, but not many for the Cuban government. Not a single work from a Cuban state institution is here. Cuban officials are well aware that any state property can be seized to satisfy outstanding U.S. legal judgments against Cuba. (This explains why the Bronx Museum of Art was not able to host its ambitious plan for loans from the Museum of Fine Arts in Havana. A substitute show of Cuban art from other sources is now on view there.)

Most of the works in Houston come from collections outside of Cuba, or from Cuban artists themselves, who can bring their work into the US. Some if it was painted over to avoid problems with Cuban Customs.

Before you enter the galleries where the exhibition is on view, you see a mournful row of flags mounted on the wall separating the galleries from the rest of the interior. The flags, called Apolitical (2001) by Wilfredo Prieto, are in black and white, bearing witness to a community of nations of which Cuba has always wanted to be a part. The island is isolated today, and not just because of the US embargo.

Isolation is a theme in “Adios Utopia,” but it’s a condition that varies in its intensity. In the first galleries, we see abstract works that seem inspired by the paintings of Fernand Leger and Kasimir Malevich. Nothing too political here, but abstract artists went in and out of favor, depending on the politics of the time.

Cuban artists have always had some room to go their own way, as long as their government didn’t perceive them to be rocking the boat. Photographs by Raul Corral Varela from 1959 show bearded commandantes sleeping in official buildings. These barbudos, as they were called, were representatives of a people’s army, and they were portrayed that way.

Another style typical of the Castro regime’s early days blended Pop Art with Cuban modernism. On the wall is Raul Martinez’s group portrait of revolutionary leaders, with Che Guevara in the back row. Also there is the hero from the era of Cuban independence, Jose Marti. In front of them is a self-portrait of Martinez, with his male lover, depicted as two citizens of a new Cuba. Any suggestion of a bond between the two was a risk in a society that persecuted homosexuals. Think of don’t ask, don’t tell, Havana style.

That honeymoon, if we can call it that, would be over soon enough, and Cuban artists would take on the obvious targets, like the country’s leadership and official rhetoric that they found empty at its core.

There’s a video, Opus, by Jose Angel Toirac, that just shows numbers quoted by Fidel Castro, whose voice declaring those numbers comes over the audio. One painting nearby is of a pot being emptied, and there’s a tongue coming out of it. You can guess whose tongue it is.

For America (1986), a small installation by Juan Francisco Elso, is a statue of Jose Marti, standing, covered in dirt. Little red barbs are stuck into his body and into the ground.

Marti (1853-95) is a central figure for Cubans. He’s a martyr to Cuban independence, yet war and martial symbols were not glorified in Cuban art after 1960. Cuban official media did plenty of that. Later, war would be a more complicated subject.

A work of four video frames shown together by Carlos Garaicoa, Four Cubans (1997), shows veterans of Cuba’s Angola campaigns standing silently in what look like ruins. (Bear in mind that there are a lot of places that look like ruins in Cuba.)  The figures are mute because the Angola war’s toll on Cubans who fought there is not a subject that Cubans discuss publicly.

Landscape and architecture are themes of choice for Garaicoa, an artist now based in Madrid who travels and exhibits widely. In “Adios Utopia,” landscape is also a subject for Los Carpinteros, who constructed a lighthouse laid on its side, using scale rather than subtlety to make its point.  The lighthouse is not just symbol of vision. Its phallic shape is an unmistakable reference to Cuban machismo.

And there’s more landscape. A painting by Alejandro Campins, Born on January 1st (2013), shows the gateway to what was supposed to be a school in a rural setting. Nothing but the gate is there, and the surface of the relatively recent painting has scratches that seem like the scars of age. The legacy of unkept promises? The toll of scarcity?

The isolation of an island nation and sheer scarcity have made recycling a medium in its own right in Cuban art, a kind of arte povera by necessity. An early work in the show is a shrine by Raul Martinez to his father, with a picture of a fisherman in a found frame, with net slung over part of it. The Spanish word for shrine is altar, like the English altar, and Martinez’s father has the look of a humble saint.

In Estadistica or Statistics (1995-2000)), a later work by Tania Bruguera, an artist who has been arrested and detained recently, an enormous Cuban flag is assembled of human hair. The suggestion is that scarcity eventually forces its victims to give up parts of themselves.

Sometimes the recycling is of themes rather than materials.  A series of cartoonish drawings appropriates the slogans from billboards all over the country, like DEFENSA or PRODUCTIVIDAD.

In Fight, Resist, Win (1989-90), Carlos Rodriguez Cardenas parodies three would-be inspirational words, starting with heroic figures and ending up with some very kinky sex. That’s not what the government had in mind when it asked its citizens to repeat those watchwords.

That’s not the only grotesquery on view, but there’s no more than you would find in any exhibition of 100 works of contemporary art.

“Adios Utopia,” which travels next to the Walker Art Center in Minneapolis, was originally planned to be shown at the Hirshhorn Museum and Sculpture Garden of the Smithsonian Institution in Washington DC, but the Hirshhorn pulled out, citing budgetary constraints. The show’s organizers, among them the collector Ella Cisneros, say they were also turned down in Miami, for political reasons, but that they’ll take the show there eventually. I wish them luck.  They’ll be more welcome than in Havana. 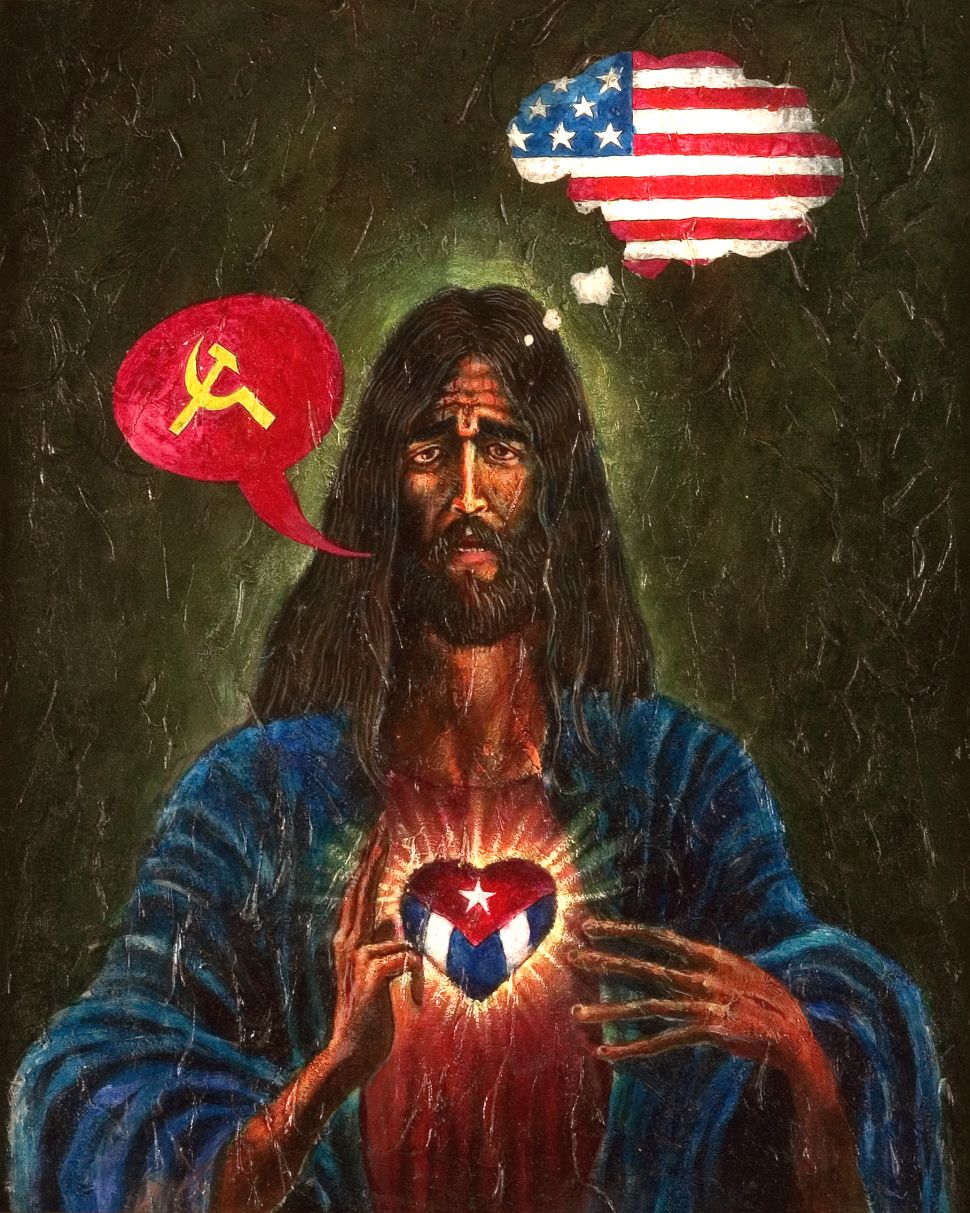