Few pre-existing songs describe a movie better than the iconic cover of “Mad World” that plays near the end of Donnie Darko, a funny, sad, dream of a film in which its hero’s death is celebrated as the pinnacle of his existence. It’s been fifteen years since then-26-year old writer/director Richard Kelly unleashed this unclassifiable masterpiece on an unsuspecting public, and fifteen years since its initial theatrical run went completely unnoticed. This wasn’t surprising. It prominently (albeit coincidentally) featured an apocalyptic plane crash one month after 9/11, the protagonist was emotionally disturbed, unknowable, and, at times, unlikeable, and the plot was, by design, incomprehensible. Oh, and there was a giant, doomsaying bunny rabbit.

However, once Donnie hit DVD, something strange happened: it found an audience. So much so that, by 2004, Donnie was back in theaters in an extended Director’s Cut. Finally, the film was perceived as so much more than a “weird” cult film. It was a complex family drama, an accessible high school satire, a political statement, a meditation on the nature of fate, and a showcase for actors both established (like Patrick Swayze, Drew Barrymore, and Mary McDonnell) and up-and-coming (like the Gyllenhaal siblings, Jena Malone, and Seth Rogen). To celebrate Donnie’s 15th birthday, Kelly has overseen a 4K restoration of both the theatrical and Director’s Cuts, which will open at the Vista in Los Angeles on March 30th and the Metrograph in New York on the 31st, before opening in several more cities for limited or one-night runs. We spoke to Richard Kelly about, among other things, Donnie’s re-release, original release, and pre-release.

One interesting thing about some fans’ reaction to Donnie Darko is their obsessive need to completely understand all of the film’s metaphysical mysteries. Do you think focusing so much on the movie’s mythology takes away from its emotional impact?

No, I’m fine with it! That’s kind of why I wanted to do the Director’s Cut. I wanted to provide a bunch more information than was there. It’s a very dense, layered film, and there’s a much bigger world beyond the film. Some moviegoers wanted to dig deeper. I appreciate that, and I want to provide that for them. But at the same time, other people want to get in and out. They want to leave things mysterious, have the emotional experience, and then walk away from it. I see value in both kinds of experiences. A lot of it has to do with the fact that we digest film in a two-hour time frame, but then we go home and digest television in an eight- or twelve-hour time frame. I talk to a lot of younger people who really gravitate towards wanting to watch eight hours of something rather than two hours of something, so I guess me doing longer versions of my films fits into that. The complete version of Southland Tales, in my mind, is six hours. I haven’t gotten to finish it yet, but the full version in my mind is six hours. I also did graphic novel prequels, tons of material I haven’t finished yet. But then again, those versions might play better at home for people because they have to get up and go to the bathroom or get a sandwich or take a nap.

You’ve previously said in interviews that you were pressured to set Donnie Darko in the present day, but you felt it had to be set in 1988. Why is that?

I will say this about the three movies that I made and the movies I’ll continue to make: one common denominator will always be a very specific timeline, timestamp, date and time. I don’t know how to tell stories any other way. To me, every character decision, reaction, and interaction is a response to the time in which the story takes place. For this story, it was about that moment at the very end of the Reagan era when we were in a time of transition, and there was a younger generation coming up that was rejecting the War on Drugs, the self-help movement, the Reagan policies, and the cultural mandate to behave a certain way. Things like The Last Temptation of Christ being banned from theaters. The tragic and immoral response to the AIDS epidemic. The censorship of different art forms. All of these things that the younger generation was appalled by. There was a transition afoot. So, this story had to take place on the eve of this election going into the Halloween weekend. And it had to be that way. I could never tell this particular story in any other way.

Another thing that setting it in the ’80s does is bring to mind all those legendary ’80s teen and kids’ movies. Do you think of Donnie Darko as being inspired by or even a reaction to those movies?

Well, I was obviously making homages, consciously or unconsciously, to a lot of films made during the ’80s, but I still see this film as a “year 2000” film. It’s a nostalgia piece from the year 2000 about 1988. A lot of those movies you’re talking about were made as “present day” films, which is something that sets them apart. But I think that those movies impressed themselves on my childhood and adolescence. E.T. and The Abyss and Back to the Future, these movies are all part of my fundamental artistic discovery process. They’re in my DNA, in a lot of ways.

Unlike most teenager-focused films, Donnie Darko makes the characterization of the parents one of its strongest qualities and perhaps even its emotional core. What made you decide to give the parents these spotlight roles?

Well, at the outset of the movie, the first line of dialogue, which is delivered by Maggie Gyllenhaal, is, “I’m voting for Dukakis.” So, right away, we’re setting up the political conflict between two generations. Liberal teens versus Republican parents. But the last thing I wanted to do was demonize these Republican parents, who I felt were generally very decent, empathetic people dealing with the struggles of very intense, rebellious, smart teenagers. That’s a real conflict that exists. So, I wanted to make sure I was making them essential and sympathetic, and I hope to achieve that with any character that I create for an actor. Even if a character might happen to be despicable or doing something horribly immoral, I try to find sympathy for them somewhat. That makes them more interesting. I never want to hate my characters. You’ve got to love all of them.

Speaking of despicable characters, I’ve always been curious about the casting of Seth Rogen, since this was the first thing he did after Freaks and Geeks, and he’s playing essentially a darker version of his character on the show. Was the role written with him in mind or was he cast specifically because of Freaks and Geeks?

It was really our casting director, Joseph Middleton, and our composer, Michael Andrews, who both worked on Freaks and Geeks, who suggested Seth. When he came in, it was clear that he was really, really talented and had this authenticity and this gentle quality. Those two bully characters played by him and Alex Greenwald are arguably the villains of the piece, but both Seth and Alex, in real life, are two of the most kind, gentle, and lovable people. That’s more interesting to me, asking someone to drift into that dark side because you end up getting a more surprising performance, as opposed to casting someone who’s asked to do that in every role.

You made Donnie Darko in the wake of the Columbine massacre, and certain moments in the film, like the image of Donnie wielding a gun, even now bring up some chilling parallels. What effect did Columbine have on the development and reaction to the film?

Columbine was something that affected me deeply and disturbed me on a very deep level when it happened. It also cast a shadow over the film when it premiered at Sundance Film Festival in 2001, about eight or nine months prior to 9/11. At that point, Columbine was still very much in the conversation. I remember distributors backing away from the movie immediately. It was a really sensitive time, and people were just not comfortable distributing a film involving a teenager firing a gun.

All of your works, at least the ones that have been produced, have featured very high-concept, complex plots. Do you tend to sketch out your character arcs before you figure out the plot details? Or do you come up with the plot machinery and fit the characters into it?

For the most part, the plot machinery comes as the first foundational blueprints are sketched in. When I was in junior high, I was going to be an architect or a political cartoonist. Then, when I was in high school, I was like, “I’m going to LA to become a filmmaker and an architect and a political cartoonist at the same time!” [laughs] So, the architecture probably comes into the plot first, but then I want to make sure the characters are navigating that architecture in a logical, emotionally honest way.

Fifteen years later, does the reaction to the film still surprise you?

I’m continually amazed by the response to the film. I’m inspired by it. It makes me very cautious and ambitious about the next films I make, to make sure I have all the resources and screenplays where they need to be, the right people involved. It’s daunting, but it continues to be inspiring. For so long, this movie was perceived as a failure or small or fringe or cult. I’m very appreciative of the word “cult.” I’ll take that any day, but it means so much to me to see this movie entering the mainstream because being part of a mainstream as an artist means you get the resources to do ambitious, original stories. That’s what I want to do. I don’t know how to do anything else. I’m not interested in doing anything else. 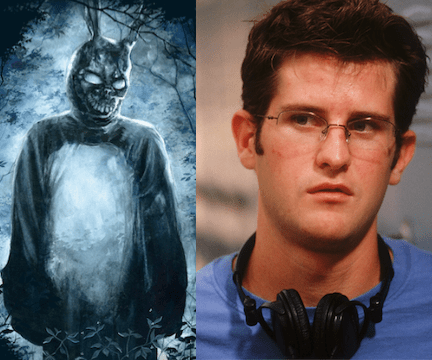