The last several years have seen each season begin with a twist, and this year is no different. This season’s opening episode had a simple format: a pageant where no one gets sent home. The queens had to present two looks: a look representing their home state or city, and their favorite Lady Gaga look. Let’s go through the queens in their order of appearance.

1) Peppermint: If you’re a drag queen and don’t know how to make an entrance, either visually or verbally, you are in drastic need for improvement. Peppermint clearly is a sweetheart, but strolling in in a cheap looking dress and sort of looking around (instead of hitting her mark and posing for the camera) is unforgivable.

Hometown look: Polished but not innovative.

Gaga: Ditto. This was Gaga at her tamest.

2) Valentina: Move over Courtney Act, we might have found ourselves the biggest fish in Drag Race (Sorry, Vivienne, you can have a Participant trophy.) Apparently she is a bit nutty to boot, which will make for great TV.

Hometown look: To repurpose a masculine look and make it drag takes talent. The sombrero took guts, and she looked sublime.

Gaga: Stunning, but this was right up her alley.

3) Eureka O’hara: There has never been a big girl so clearly in contention for the crown from episode one. Latrice and Ginger Minj (who isn’t even that big) both built their reps as their seasons went on and made everyone into fans. Eureka has the look and personality right out of the gate. When she cries over Lady Gaga’s appearance it seems vulnerable and sincere, even trying to catch herself for her display of emotion (Apology not accepted, it was charming!).

Hometown look: Making fun of “white trash” is really punching down. Not particularly well done, either. If she had started smoking a (fake) meth pipe on stage that would have brought the house down down the house.

Gaga: Good for her for embracing her size and going with horizontal stripes. This competition is often about confidence as much as talent and she has both in spades.

4) Charlie Hides: If you’re going to make a joke about “shade” with some oversized glasses as a prop, make sure they’re sun The comedy queen did not seem particularly funny but more campy, a la Tempest DuJour.

Hometown look: This was more of a Halloween costume than a drag look.

Gaga: A fair imitation but doesn’t sell Charlie as much as it sells Gaga.

5) Farrah Moan: She mentions that her look is Vegas showgirl, covered in feathers—yet comes out in a barely-there dress. If a Vegas showgirl walked in with some insane headdress, it would be fitting with the character and also dramatic af.

Hometown look: Seemed more like Moscow than Vegas, and not particularly innovative or impressive as either city.

Gaga: Looked almost like cosplay. Farrah comes off as a pretty boy who likes makeup rather than a drag queen.

6) Sasha Velour: She walks in with a Jughead crown, shaved head, sequence dress and just…screams. At that precise moment, all of America heard every Drag Race fan gag in unison.

Gaga: Well this one was a no-brainer. She obviously spent quite a bit of time getting that palette effect to look the same as Gaga’s.

7) Alexis Michelle: Roxxxy Andrews eat your heart out? The bodysuit was on point and she seems to be one of those queens who has a lot more up her sleeve than is apparent at first.

Gaga: One of the smartest choices of the night because it demonstrates her versatility as a queen. If there were any doubts that she could do fish and glamor, this was the answer.

8) Shea Coulee: That Pearl dress was on point, attitude on point, repartee on point. Instantly clear she has what it takes to go the distance.

Hometown look: If a queen can combine fashion and over-the-top humor, she is at the top of drag as performance. That someone as fierce as her can strut in a hot dog outfit shows that she has the talent and insight to win.

Gaga: By far her worst look of the three, and an inferior imitation. Perhaps being a true original makes it hard to copy others?

9) Trinity Taylor: What a vile person. She doesn’t pad and by her own admission has had a lot of (subpar) work done—to what avail? All that can be set aside, but some things can’t. She knows damn well (or should) that every queen is going to watch the first episode with all their friends and family. Knowing this, if you’re going to criticize someone’s appearance, be funny or be tactful—not simply mean. Being mean for no good reason belongs to recappers, not contestants.

Hometown look: You’re from Orlando and you don’t come out as, say, Maleficent? Damn she’s terrible.

Gaga: Simply excellent. The hair was amazing, and the blood and glove great touches.

10) Kimora Blac: The first queen in the show’s history who looks better out of drag than in it. What the wtf. Great attitude, though. That said, there are signs to show that there is a loveable goofball underneath all that, as with Pearl and Joslyn Fox.

Hometown look: Though it’s fairly typical for Vegas, it’s well done and instantly clear where she’s representing. Much better than her entrance appearance.

Gaga: This went very organically with her persona. She was clearly feeling herself and with good reason.

11) Jaymes Mansfield: Trying to do kooky but not quite there yet. Often talented queens get cast before they are ripe (i.e., Laila McQueen and Serena Cha Cha) and end up failing due to inexperience. It’s hard to imagine her going far but easy to see her blossoming over the next few years.

Hometown look: Was this the look that sent Magnolia Crawford home? It was neither cheap nor funny enough and the judges agreed.

Gaga: Reminiscent of how Pandora mistook (and continues to mistake) silly for actually funny, her affect was droll at best and the look not well executed.

12) Nina Bo’nina Brown: A legit crazy person, she came out in chimp makeup at the premiere and got into all sorts of racial issues that…well, let’s leave it there. When she says no one does what she does, she’s right. We’ve never seen a makeup artist quite like her before. The padding was almost grotesque but that’s easy to fix.

Hometown look: The stuff of nightmares in the best possible way. Drag is not for the kids, and if any children saw this they would be scared to ever eat a peach again. One of the most memorable looks in the show’s history.

13) Aja: Hard to believe she’s only 22. She’s clearly got a strong point of view and a lot of drive. It’s no wonder that Trinity—who is basic beyond belief—was threatened by Aja’s Brooklyn edginess.

Gaga: Something about this seem off, and Aja didn’t seem too comfortable with the look either.

Top three: Eureka, Sasha and Nina, with Nina the winner. This bodes extremely well for the season. Art queens or “weird” queens haven’t done as well as they should have, from Nina Flowers to Ongina to Milk. Having these queens make it to the end or even win might be one way to mitigate against the show’s increasingly mainstream appeal and the consequent threat of banalization. 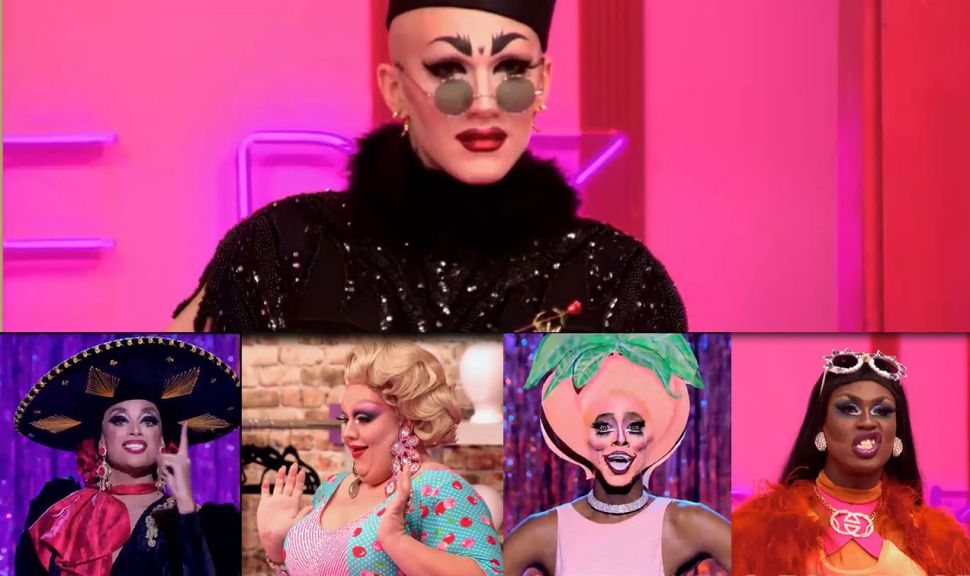