Once in a while a queen walks into the Drag Race werk room and catches the eye of even cynical long-time fans. We sat down with the unique Sasha Velour to find out just what makes the Brooklyn art queen tick.

Did you grow up in Brooklyn?

Sasha Velour: I grew up in central Illinois, in Urbana. My dad is a professor of Russian history so I traveled from university campus to university campus. My grandmother came over in the 40s from China. They moved from Russia to China and moved to the huge Russian-Jewish community in Harbin, Manchuria. They then escaped being imprisoned by the Japanese into San Francisco. I’ve got a crazy Russian-Jewish family history.

Russian culture is known for its homophobia. Was it weird for you coming out?

No, I think the time in San Francisco made my family very open to gayness. I always joke that it wasn’t a big deal for me to come out because they were prepared from me to be gay when I was two years old. It was obvious, and everyone told them I was gay because I was the gayest little child imaginable. I have a million pictures of me in drag as a child. I was constantly dressed up as a witch or a princess. My parents actually asked me at a certain point because they were so many signs. I’m very lucky to have such open-minded parents.

Being gay and doing drag are separate things, was that a concern for them?

I think they were worried about the logistics of being a professional drag queen. What that means; if I’m sleeping; if I’m making any money. But artistically I’m surprised my dad has become so interested in drag as an art form and specifically as a politically-engaged art form.

As an art queen, does the idea of drag as transgression appeal to you?

Am I an art queen?

That’s what you said in the first episode!

Yeah, I think so, unfortunately. I studied visual art but I’ve never been part of the art world at all. Partly because I feel fine art communities get very apolitical. There are times where the art world talks about political ideas but doesn’t have a huge political impact. What I think makes drag so political is that it’s really entertaining. It brings queer people together talking about the images that delight and upset us every single day in really necessary ways. It’s ideas but connected to people’s real lives. That’s why it’s so powerful.

One of the very smart things Sharon Needles did on her season was realize she couldn’t do her goth look every week or she’d come off like a one trick pony. Was that something you were concerned about going in, knowing you couldn’t keeping doing, “shaved head with weird thing on top”?

We get some indication of what the runways might be, but they come in a random order with no warning. I remember when they announced that we had to do the hometown look, and I was like, “Shit, I have to put on another crown immediately after I walked in!” (which thankfully no one has read me too hard for). I definitely brought a huge variety of looks. Even though I love bald drag and genderfuck drag, it’s not drag without the ability to transform yourself into many different types of femininity and gender. I brought wigs and I brought glamor.

Looking back at the history of the show, from Ongina and Nina Flowers in season one to Milk in her season, it’s often hard for the weird queens to go as far as maybe they should. Was that something you were worried about?

I think it was hopeless to try and become what the judges and producers are looking for. I tried to push myself to take my own drag to the next level. As long as I’m representing what I think drag should be, in terms of my own art, then it would be a good showing no matter how far I went.

It’s usually painfully obvious from episode one who the top tier and bottom tier competitors are. Is that a function of the edit, or are you sizing people up like that as well?

Absolutely. I remember my list on who I thought the top four were going to be based on the first day, but it did not match up. People kept revealing surprising talents and abilities as the season continued.

Is there any way for us at home to be able to understand what the stress is like?

I found it all kind of manageable, compared to living in New York and getting home from work, changing, getting into drag, getting to the gig, find a ride, figure out how to pay for a car. In some ways it’s an absolute utopia getting escorted to a soundstage where you have a beautiful display. I found that the intensity of time and of having cameras on you is the biggest adjustment. In terms of the amount of things you have to do, for New Yorkers it’s a breeze.

What about the social isolation?

I know it drove some people crazy, they’d be pacing in their hotel rooms talking to themselves. But I kind of isolate myself half the time anyway to work on drag. I actually love tuning everyone out, sitting in my little office creating a costume or performance idea. It worked well for my strange form of crazy.

If you’re an artist you have to have a strong point of view, and often that is perceived as “I’m for this, so I’m against that.” Were you worried about the whole perception of artists being snobs?

I think I come off a little bit fancy anyway because I try to write an essay every time I speak. It’s ingrained, I’m the child of professors. That’s how I grew up; my parents speak in essays. But I believe that all drag is really important and needs to be uplifted—even and especially varieties that aren’t featured on the show. I didn’t come in with an attitude of superiority or even performative artistic superiority. The challenge was for people not to assume that I do, because of the way that I look and the way that I talk. I think they learned very quickly that I can be a support system.

I think if there’s one thing that you should be able to do, as a man in a dress, high heels and a wig or headpiece, is know how to make an entrance. Did you spend time thinking how to make the biggest splash in that first episode?

At one point I thought I was going to come in with this giant red flag and be like, “We’ve stormed the palace!” The scream was the same idea, just a little bit less literal. Someone said I should just walk in and say, “What a dump!” quoting Virginia Woolf. It was important to make some sort of dramatic statement. That scream was easy to do because I was able to tap into the real terror of stepping in front of the cameras for the first time.

When you were doing the confessionals, were you tempering it with the knowledge that this other person is going through the same struggle you are and it’s not easy?

I put more thought into what I wanted to say in the confessionals because it’s easy when you’re in a closed room to be funny or negative. Also since it’s a competition you’re naturally evaluating everyone around you. I tried to be honest and fair because I feel like that’s how I talk normally…with a touch of shade.

Who were your inspirations as an artist?

I look to people who made a huge cultural impact. The one who’s really a huge inspiration is Keith Haring because the political message was so simple and empowering, of love and brotherhood and sisterhood throughout our community, across communities, and especially in urban spaces. But it was conveyed through the most recognizable, accessible, beautiful and simple artwork.  And it’s joyful. I intuitively understood it even as a kid, even if I didn’t understand the context of what was going on with AIDS at the time. That’s the kind of art that I’d like to create, art that’s a part of pop culture connected with political ideas.

As a fellow Russian, we’re so brought up with this idea that life is hard and grim and miserable. There’s this idea in American culture that if art is joyful it’s somehow less legitimate. I find that a nasty message. I’m guessing you agree.

I totally agree. But being a Russian-American I have to push against joyfulness with a bit of Russian angst too. So I come at it from both sides.

Who in the contemporary art world are you inspired by?

I look to Brooklyn drag queens who aren’t on the show, people like Untitled Queen and Patti Spliff. That’s where I get my inspiration, from this community.

St. Etienne has a great lyric where they say “I prefer Donovan over Dylan,” meaning a preference for the imitation over the original. Does the name Velour speak to that, this idea of validating the ostensibly inferior?

Oh, absolutely! I think drag speaks to that too: Not just validating but almost celebrating things that are considered “fake,” “over-the-top,” “imitation” or “camp.” I love that “Sasha Velour” sounds romantic and fancy but it’s actually a fabric people usually talk about with distaste. I’m all about that, finding true beauty in the things others call “ugly.” 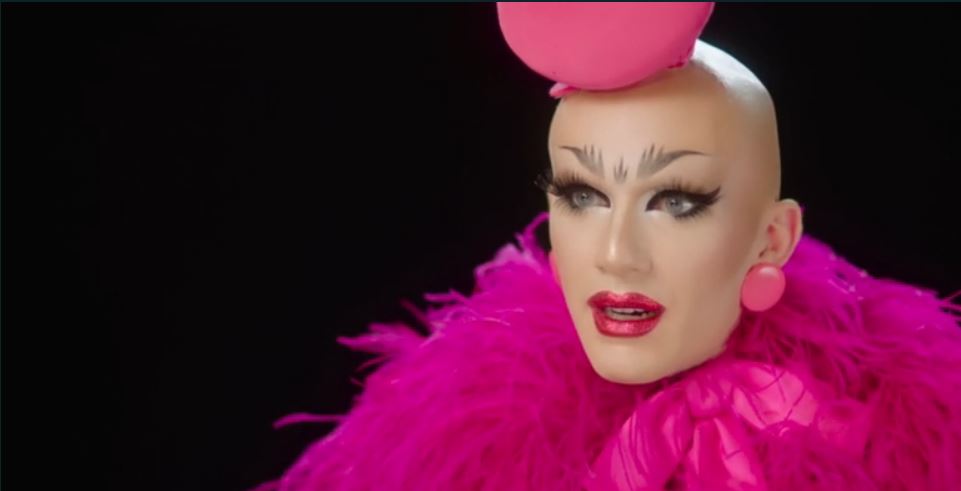