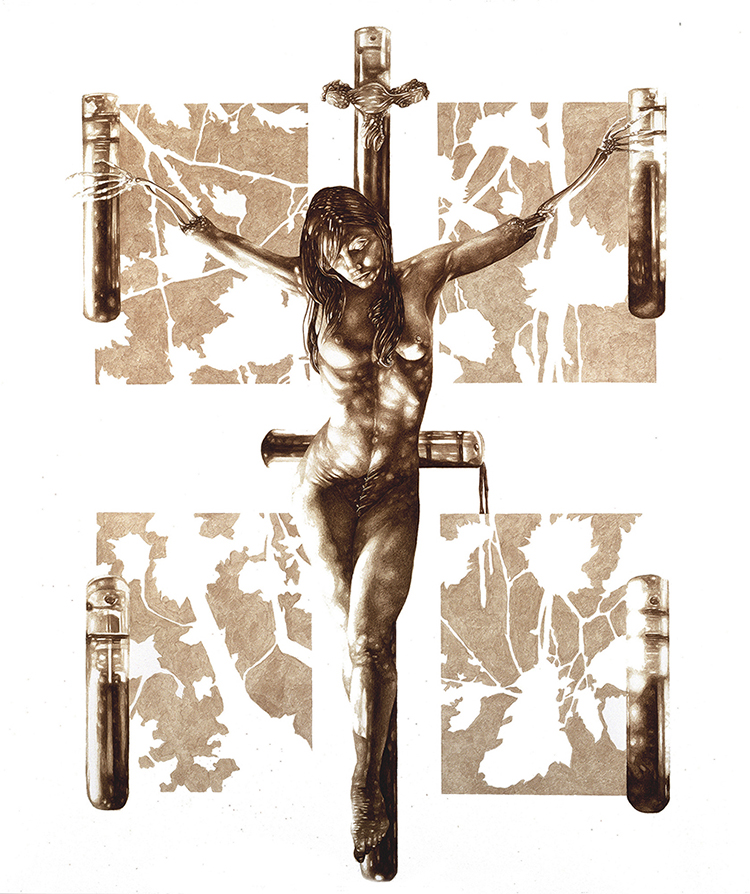 Multiply Thy Sorrow, by Vincent Castiglia.
Courtesy the artist 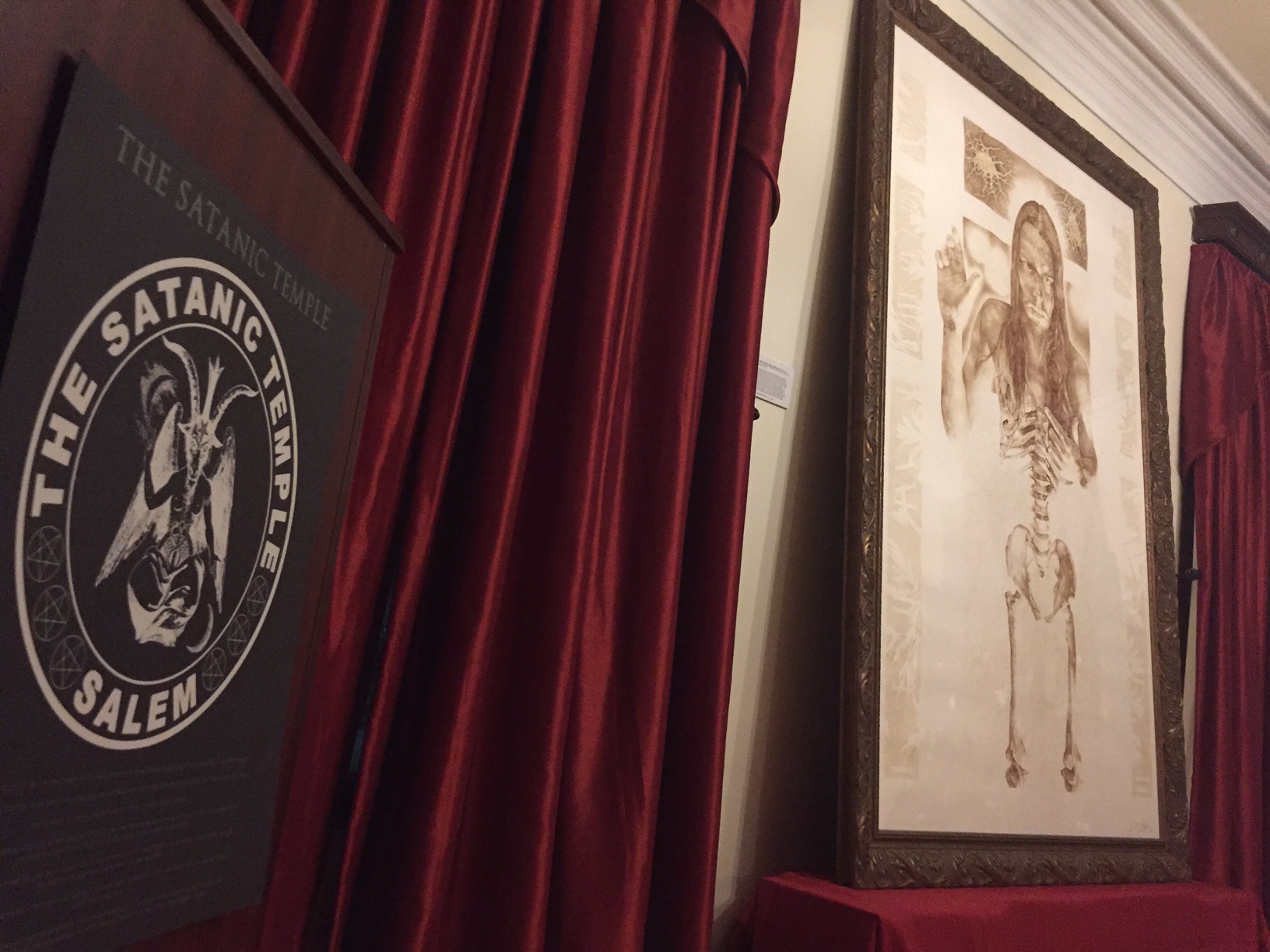 An Installation view of "Sanguine Spring" at the Satanic Temple in Salem, Massachusetts.
Courtesy the Artist 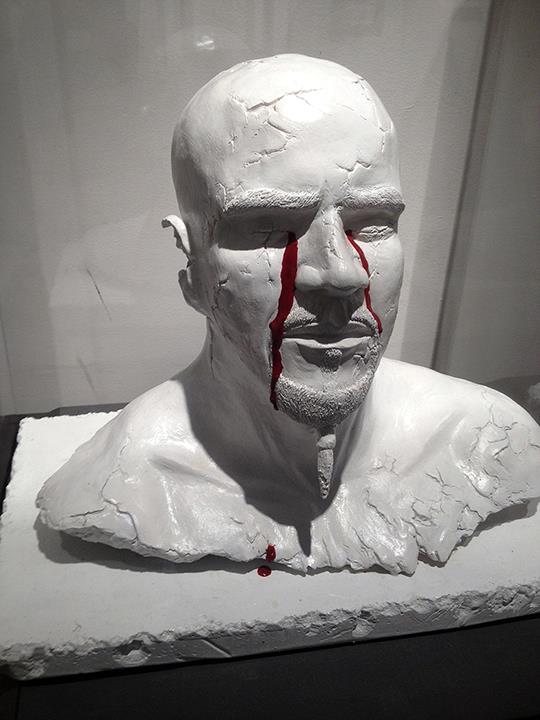 Blood from a Stone.
Courtesy the artist 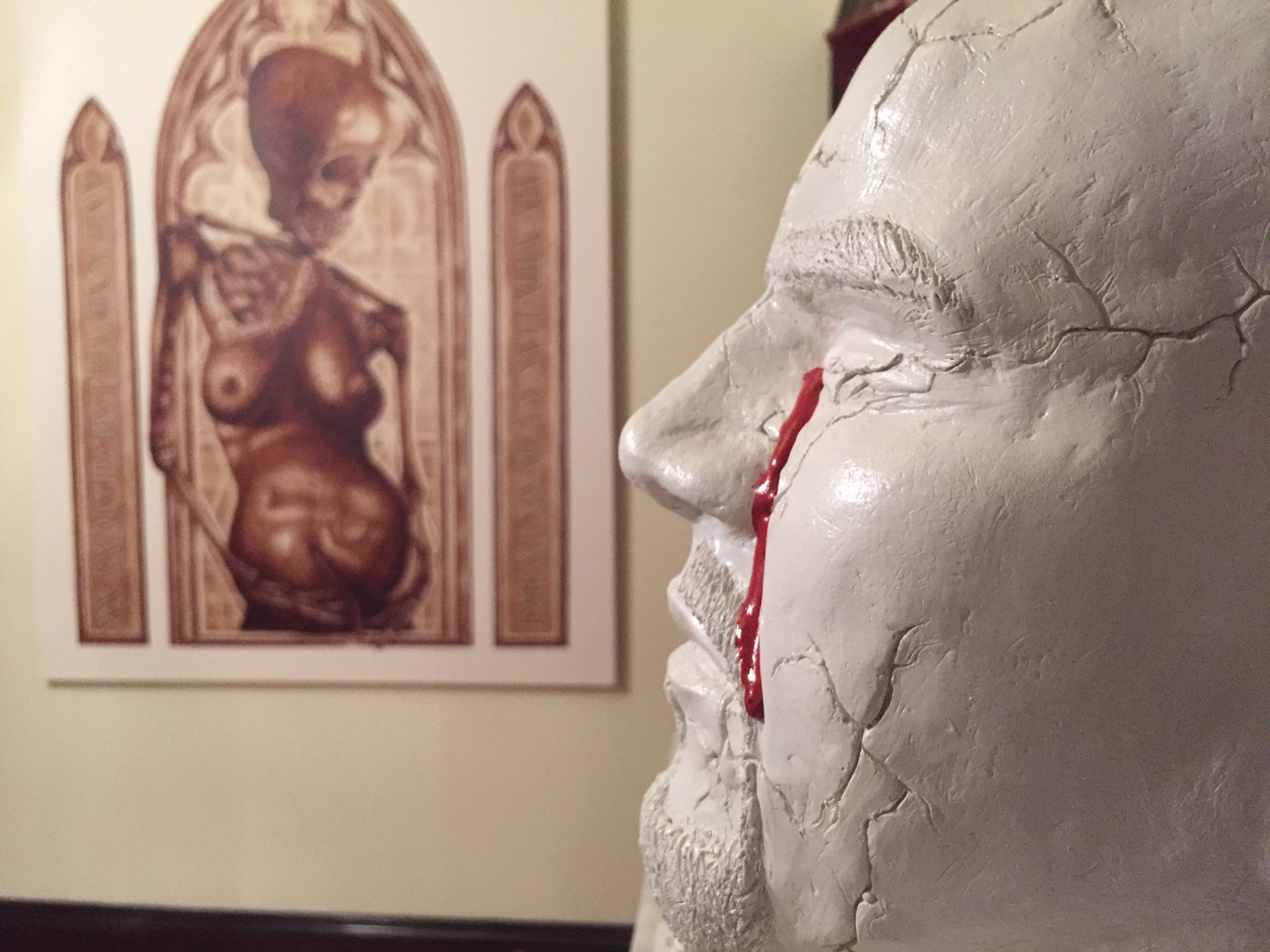 Another view of "Sanguine Spring."
Courtesy the Artist
Advertisement 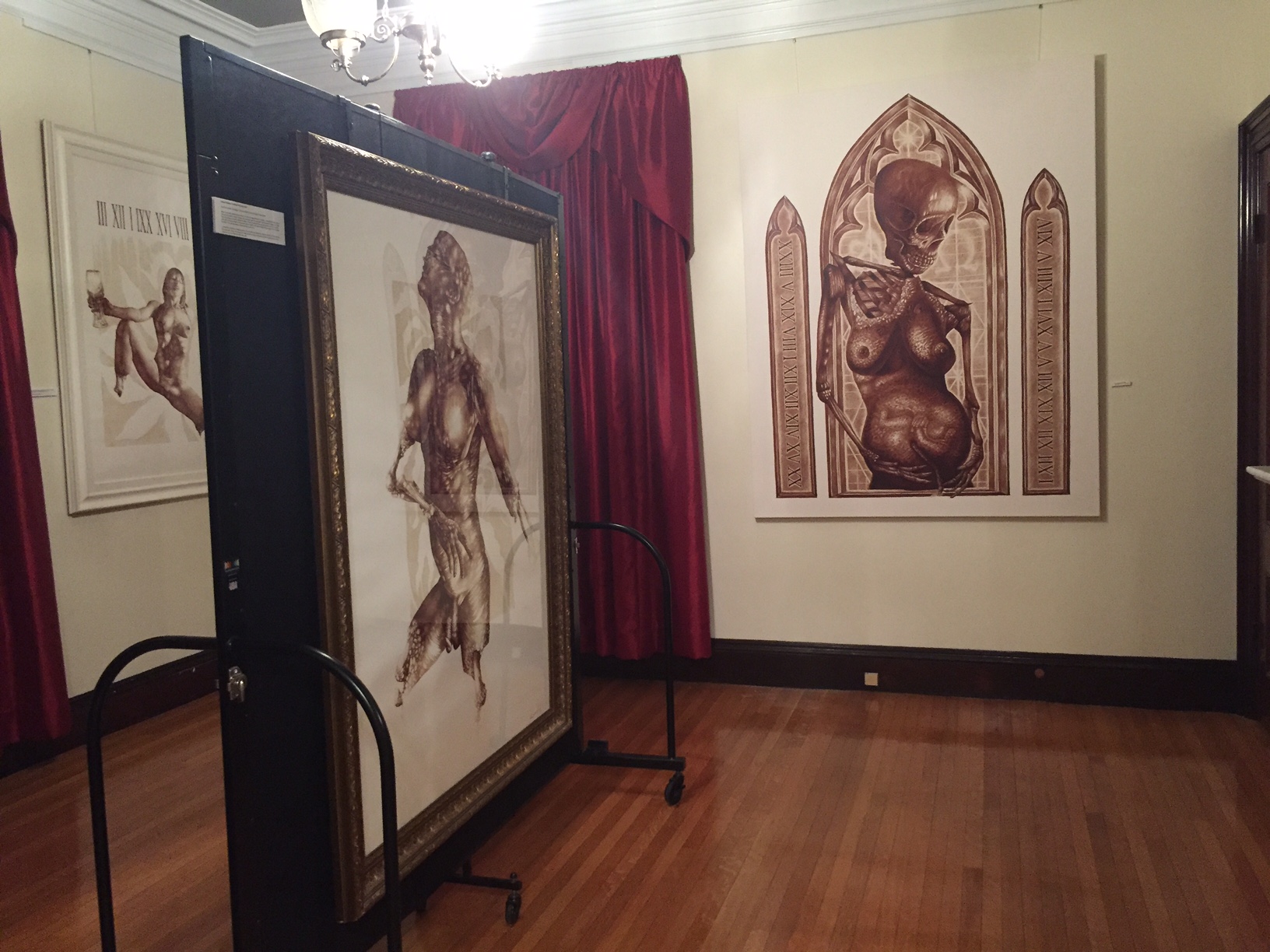 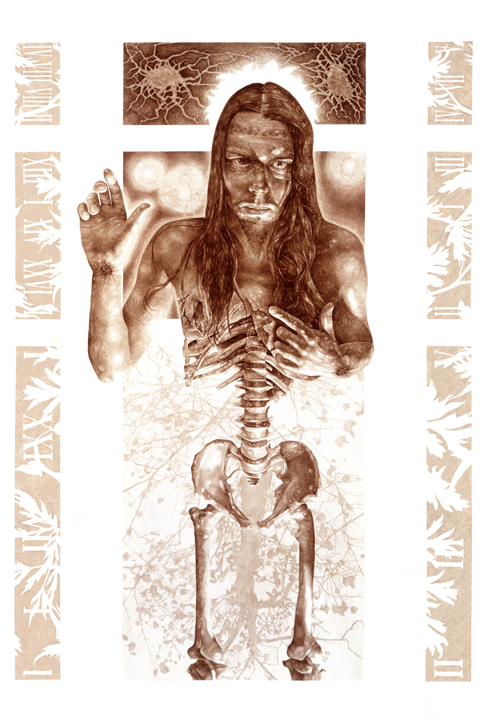 Stings of the Lash.
Courtesy the artist 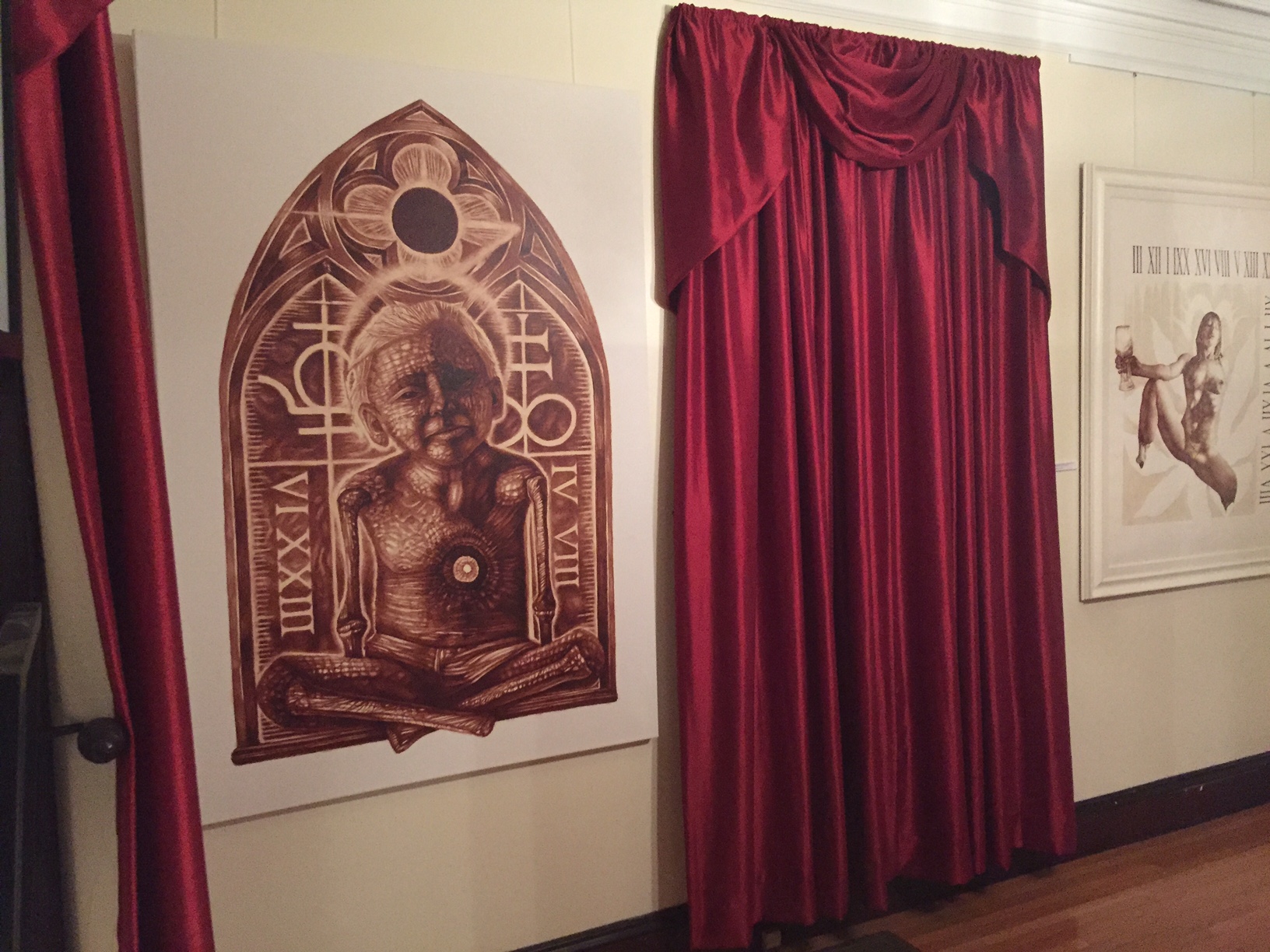 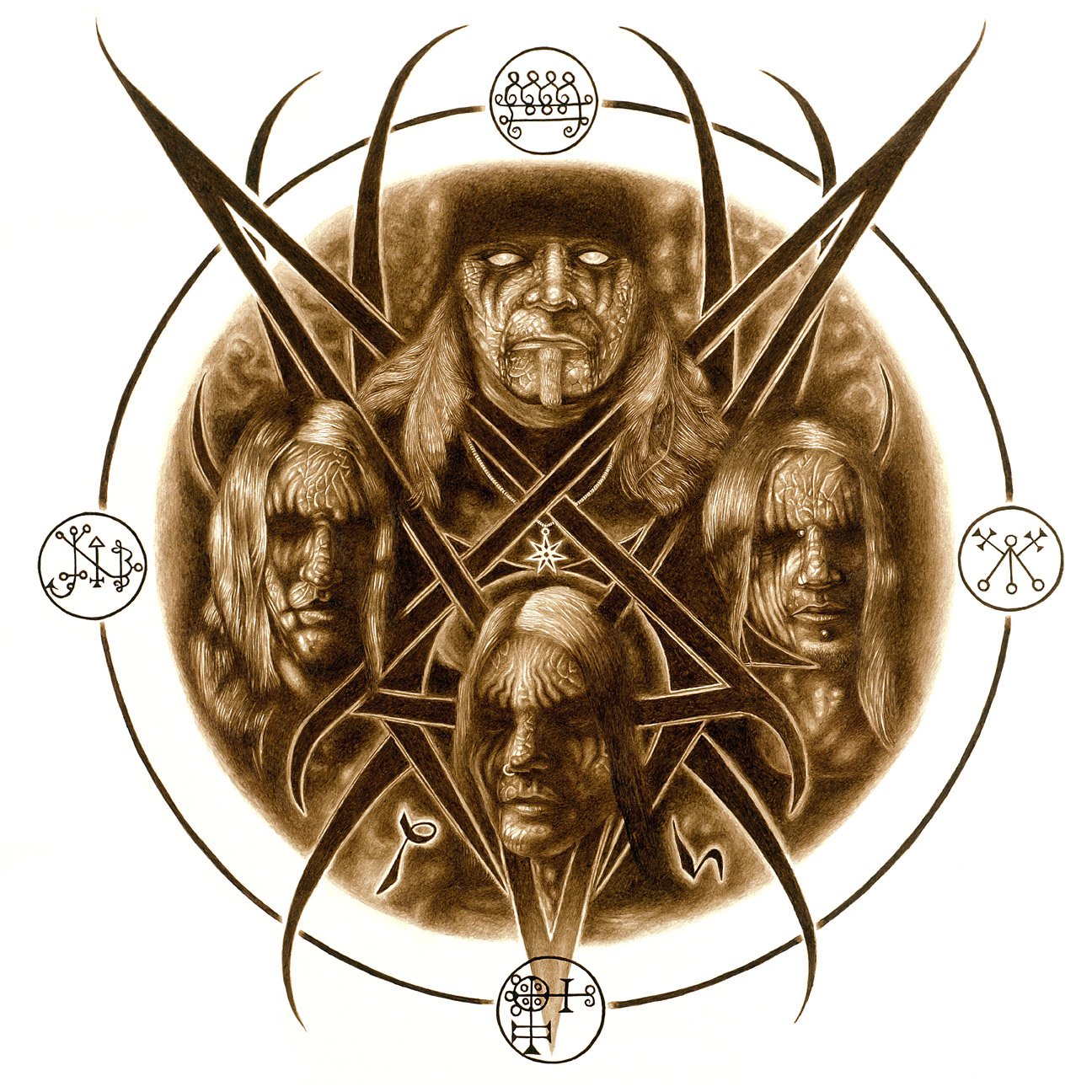 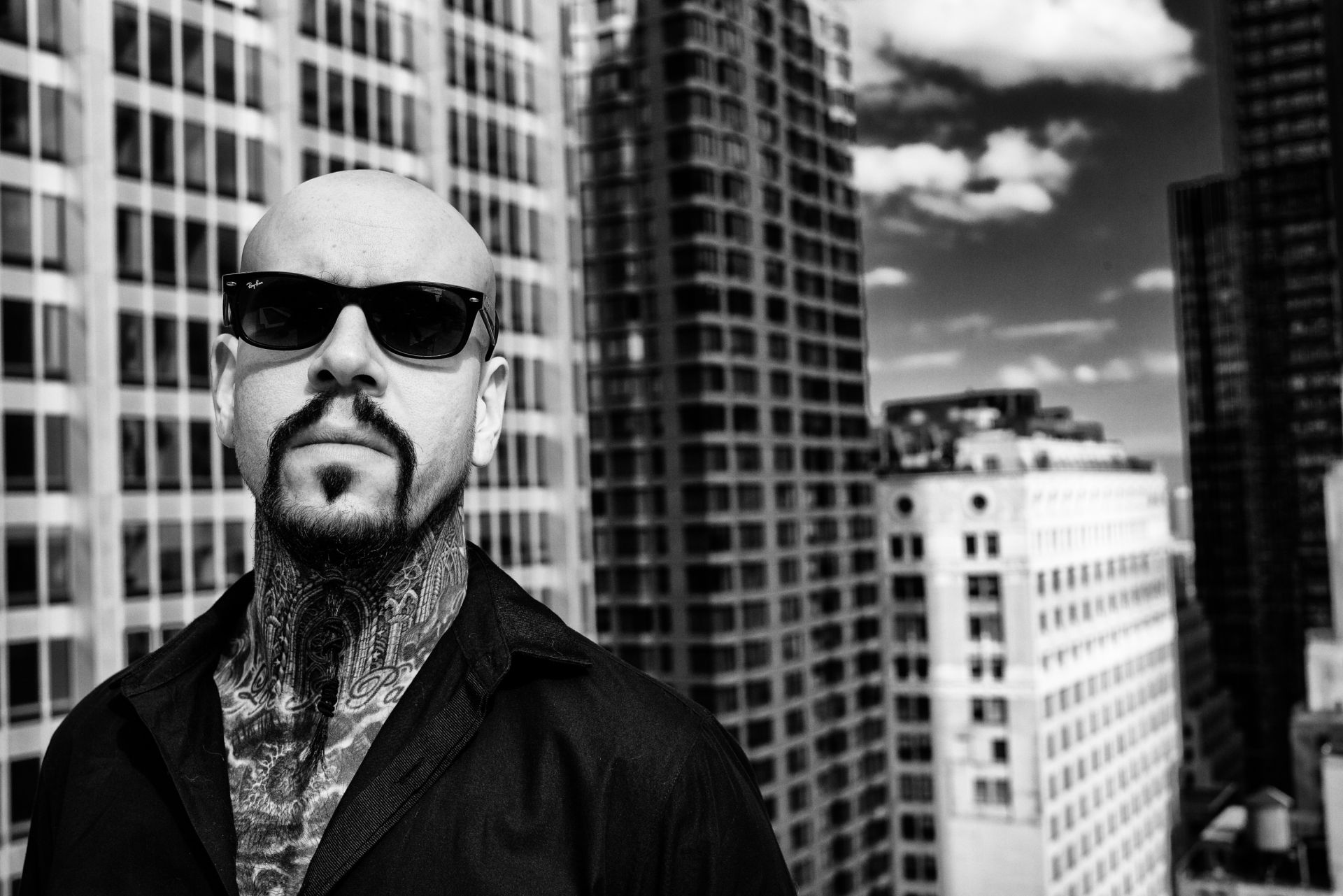 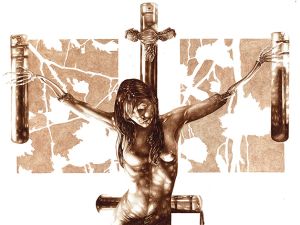 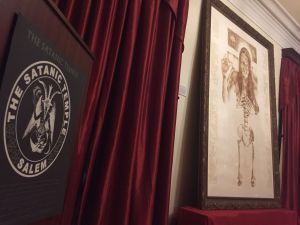 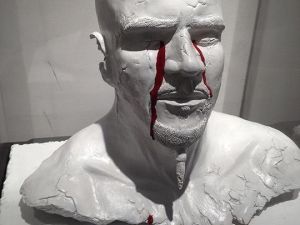 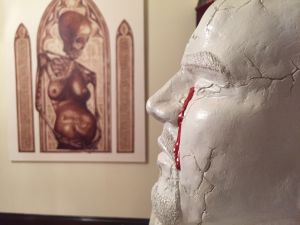 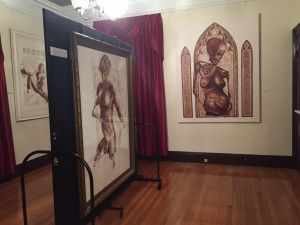 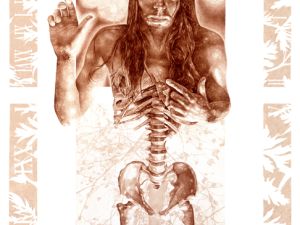 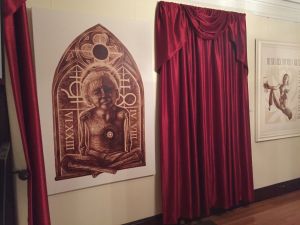 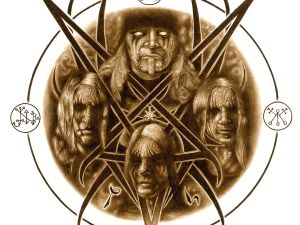 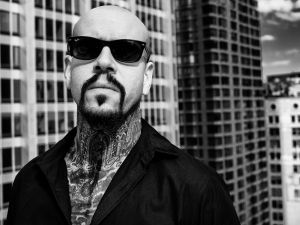 When the Satanic Temple first opened its headquarters in Salem, Massachusetts in 2016, locals didn’t seem all too concerned about the arrival of their newest neighbors. After all, over the years Salem has become a hot destination for enthusiasts of the occult due to its long association with witchcraft. The Temple’s HQ, along with the Salem Art Gallery, now occupies a 19th century Victorian house not far from the historic site where over a dozen people accused of witchcraft were executed in 1690, and the black clapboard home that once belonged to witch trials Judge Jonathan Corwin is located just down the road. “I guess we’re waiting to see what kind of art they show there,” one resident told the Boston Globe when the Temple moved in. (Outside of Salem, the Temple’s public art program has garnered attention, such as the proposal to erect a large-scale statue of Baphomet outside the Oklahoma State Capitol.) A year later, and the Temple’s gallery is indeed hosting unique artwork, even by Salem standards: paintings made with human blood.

Through April 30, the Temple is showing a mini-retrospective of work by New York-based artist Vincent Castiglia, who has gained notoriety for using his own blood to create large-scale portraits of the human figure. His sepia-toned images often feature nude bodies in various states of decomposition, accompanied by a wide spectrum of religious symbolism both Christian and Pagan. In 2016, Slayer’s Gary Holt commissioned Castiglia to paint a guitar using vials of his blood—a first for both the music and art world—and he’s created works for comedian Margaret Cho and the metal band Triptykon. Castiglia’s affinity for working with the unorthodox medium even caught the eye influential Swiss artist H.R. Giger (best known for his designs for the Alien films). In 2008, Giger invited Castiglia to be the first American to exhibit work in a solo show at his eponymous museum in Gruyères, Switzerland.

From his Manhattan studio, Castiglia’s painting process goes a little something like this: He collects his own own blood into vacutainer tubes about 15-18 at a time, which he said “sounds like a lot but it’s a lot less than you would think,” and he mixes the fluid with various solvents to create several consistencies that are ideal for painting directly onto paper. Most paintings begin with a loose sketch, as well as photographs of live models, and then the blood work begins.

Blood, Castiglia said, is an essential ingredient to his work because “it contains all of our life’s instructions, our genes, and then also, I believe, all of our psychic energy.” That’s why all of his paintings are made with his own blood, except in the case of special commissions where he may blend his blood together on paper with the client’s. And while his medium may be sourced directly from his own body, his imagery is often largely based on real life circumstances. “They’re allegories. They’re meditations on very real circumstances in life that need a platform and a place to be worked out and that’s the way I do it.”

Works feature titles such as Temporality Struggling With Eternity, Initiatrix and Stings of the Lash, and death is among his most frequently explored themes. “Often times there are things maybe people don’t want to look at. People don’t want to question their mortality, they don’t want to think about it until it’s time, and the work confronts it it’s every piece—it’s there it’s not going anywhere.”

Castiglia first began using blood to paint around the year 2000, shortly before he began working as a tattoo artist. “It was really right around that same time that I started experimenting with blood as a medium, having nothing to do with tattooing actually. It was an entirely separate process that was occurring, and it was really just me trying to find myself and trying to find a voice, visually and creatively,” he said.

After experimenting with a variety of other mediums, Castiglia says something clicked the first time he painted with blood, though he won’t say much about the circumstances of his breakthrough. But he promises more will be revealed in the documentary that filmmaker John Borowski is currently making about his life and work. “A truth was communicated that couldn’t be by any other means for sure,” he said. “It was like the barrier between art and artist was dissolved in the most literal way possible and everything that was contained within me had become this painting that I had created. I just thought it was such a perfect concept, and perfect closing of a conceptual circle.”

In 2008, while preparing for his exhibition at the Giger Museum, the line between art and life got dangerously thin for Castiglia, when he suffered a partial lung collapse that he says was likely caused by extracting too much blood over a short period of time. “There wasn’t much trial and error when it came to getting the blood out—there was a bit of ambiguity about how much to take.” It took him almost a year to recover, and today he pays close attention to his bloodletting routine, but it hasn’t deterred him from continuing to make art in the least.

“Art has been synonymous with life for me, and that might sound dramatic but it’s the truth for me anyway. It’s how I’ve lived, how I’ve come to better understand the world and myself. Without it I don’t know what I’d be doing with my life at all. There wasn’t even a question whether or not I’d continue, just whether or not I’d be well enough to if I could, and I was and so I have,” he said.

The macabre tone of Castiglia’s work has made it a good fit for the Satanic Temple’s burgeoning art program, but don’t be quick to assume that the artist himself prescribes to the group’s beliefs, nor that his work is associated with the “dark arts” in any way. Religion aside, he does agree that the work is a form of sacrifice, and he considers bloodletting on the canvas to be “the exorcism of energies that need to be put in their proper place.”

“Some people pray, some people go to church, or they worship Satan or whatever,” said Castiglia. “Art is my sacred space. It’s where I’ve found peace, and where I’ve found everything I’ve needed to in terms of direction and purpose and so forth.”

“Vincent Castiglia: Sanguine Spring” is on view at the Salem Art Gallery through April 30