You’ve made the grade when you’re ridiculed on NBC’s Saturday Night Live, as Hannity was over the weekend.

“Of course, the king of Trump supporters is Sean Hannity,” Davidson said. “He looks like a thumb, which explains why he’s so far up Trump’s ass.”

As the studio audience applauded, Davidson added in a soft murmur “I hate him, too” then continued in normal voice.

“I guess he likes Trump because his hair is also really weird,” Davidson continued. “The top of his head looks like two eyebrows got to live their dream of, like, being hair.”

But Hannity is not just Trump’s propaganda stooge. Sometimes, it seems as if he gets leaks—like a real journalist. Or maybe Trump simply obeys Hannity’s commands. On Thursday night, Hannity told his audience what “Mistah Trump” should do.

“For weeks, we’ve been warning you about the Deep State-Obama holdover bureaucrats who are hell bent on destroying this president, President Trump,” Hannity said. “Tonight, it’s time for the Trump administration to begin to purge these saboteurs before it’s too late.”

Next day, Trump fired 46 U.S. Attorneys including Preet Bharara, the U.S. attorney for the Southern District of New York. And that illustrated some “small world” coincidences.

At issue: Financial settlements with women who said they were sexually harassed by Roger Ailes, the disgraced former Fox emperor driven from the throne last summer.

One of Stelter’s guests, Jeffrey Toobin, said Hannity, in his “purge” rant, was expressing a “widely held view within the Trump administration.”

The firings a day later, Toobin said, “are related but not cause-and-effect.” He predicted the federal cases in Manhattan would continue “unless and until a new boss tells them to stop.”

That boss could be Marc Mukasey, according to a tweet by Gabriel Sherman of New York magazine. Mukasey once worked for Ailes. Also close to Ailes is Trump who, like Ailes, has been accused of sexual harassment and once bragged that he, Trump, likes to grab random women by the crotch.

“This is nasty, this is ugly, this is beyond sexism,” he said. “This is sexual assault in some cases.” Zurawik seemed to suggest Fox should reform and save itself.

Toobin countered by saying sexual harassment doesn’t bother Fox all that much because its ratings are high and its biggest star, Bill O’Reilly, has been accused of offensive sexual behavior more than once only to see those cases go away in out-of-court financial settlements.

“They are not penalizing Bill O’Reilly for behavior that certainly would get someone fired I think here at CNN or at most companies,” Toobin said.

Speaking of Fox ethics, Stelter showed a clip of Hannity welcoming back plagiarist right-winger and Nixon hack Monica Crowley—without telling the viewers what literary sins got Crowley booted from even the sketchy Trump gang.

And Hannity told Crowley how to handle the media.

“I don’t think you should answer any of these people’s questions,” Hannity said. “They can go straight to hell.”

Stelter closed with a clip of Hannity pushing a crackpot conspiracy theory that the hacking by the Russians of Democrats in the campaign was faked by “Americans” who left “false flag” clues that suggested Russian involvement.

Turning on his outraged-and-peevish routine, Hannity waved his arms, pointed his finger and scowled as he spoke to a guest on a remote camera.

“In other words,” Hannity said, with stern shock and disbelief in his voice, “you’re tellin’ me this whole Russian story—that the media’s been running with for months and months and months—that it was our people that did it and they just put the fingerprints of the Russians on it?”

Despite a lack of evidence, his guest agreed.

But McCain turned his answer into a comment about the involvement of Flynn and the Trump campaign with the Russians.

“There’s a lot more shoes to drop from this centipede,” McCain said.

TAPPER: “Should President Trump take back his charge and apologize to President Obama and the American people?”

Tapper’s younger and more Eastern senatorial guest was Cory Booker, Democrat of New Jersey, who discussed the attack on health insurance by the Republican Congress and Trump.

“The Republicans cannot just force this down our throats,” Booker told Tapper. “It’s going to force a lot of folks off long-term care, hurt working-class folks.”

Booker criticized Secretary of State Rex Tillerson—the former chief executive of Exxon-Mobil—for not taking the media with him on foreign trips and acting, instead, like a private businessman.

“It’s outrageous,” Booker said. “I’m sorry. This is not ‘America, Inc.’ This is not a corporation.”

Evaluating the national mood in the Trump era, Booker said “There is something seriously wrong when mendacity has become the norm . . . when law-abiding citizens are afraid to leave their home . . . when hate crimes are surging . . . This is a toxic environment.”

“George, I think that’s getting ahead of ourselves at this point,” Cotton said.

From the other side of the aisle and the other House came Adam Schiff, Representative of California, who discussed Trump’s wire-tapping accusations against Obama.

“Two possibilities here,” Schiff said. “Either the president quite deliberately, for some reason, either made up this charge or, perhaps, more disturbing, the president really believes this . . . The only question is why the president would make up such a thing.”

Schiff didn’t cite the parable of the “boy who cried wolf,” but he suggested that Trump may have a hard time convincing people of real danger if he keeps lying—or speaking delusions—the way he’s done so far. What if there is a crisis and people don’t believe Trump?

Schiff left open the possibility that Democrats on the House intelligence committee might abandon the inquiry if the committee—run by California Republican Devin Nunes—tries to wall off information. However, Schiff said his previous complaint about lack of FBI help is no longer the case.

From the oversight committee came the ranking Democrat Elijah Cummings of Maryland, who spoke of the approach to honesty from Trump and his cronies.

“There is an air of distrust that’s been brought on by President Trump himself and so many others,” Cummings said. “We have over and over again heard things that have been just proven to be untrue. You question almost anything that comes out of the president’s mouth.”

Cummings met with Trump last week and gave him some straight talk about honesty.

“I told him this, by the way,” Cummings said. “He needs to be careful of what he tweets and what he says. Do less tweeting and do more leading.”

On the panel, Katrina vanden Heuvel of The Nation called Trump’s health-care reduction “a betrayal of Trump’s own voters . . . That’s something the Democrats need to expose . . . Millions of people are engaged now . . . People will die.”

Fellow panelist Jamal Simmons said he gets his tips on Trump’s Russia connection from talking on the phone to his father in Detroit.

“Something is ‘stanky,’” Simmons said, quoting his dad.

The full-court press by the Republicans on Trumpcare included House Speaker Paul Ryan of Wisconsin telling John Dickerson of CBS that “Obamacare is collapsing” and that the Republican plan will offer Americans “more freedom, more choices, more markets, lower prices.”

When Dickerson asked about Trump’s accusations regarding Obama, Ryan offered a tight smile and said “That wasn’t really part of the marketing campaign” for health care.

“Like I said,” Ryan said, “this is going to be an unconventional presidency.”

When Dickerson asked Ryan “How many people are going to lose coverage?” Ryan cut him off and said “I can’t answer that question. It’s up to people. Here’s the premise of your question: Are you going to stop mandating people buy insurance?”

Then he got all patriotic.

“People are going to do what they want to do with their lives,” Ryan said, “because we believe in individual freedom in this country.”

On the pundit panel, Ezra Klein of Vox analyzed the Republican strategy on the issue.

“They seem to have defined the problem extremely narrowly,” Klein said. “How do we pass something—anything—that we can call ‘repeal and replace Obamacare?’”

Of the GOP rush, Klein called it “a speed born of fear but a speed that’s going to make bad policy.”

On the health-care question, host Chuck Todd on NBC asked Tom Price, the secretary of Health and Human Services, “Can you say for certain that once this bill is passed, nobody—nobody—will be worse off when it comes to paying for health care?”

“Well, I tell ya, right now, there are a lot of people that are worse off right now when they’re paying for health care and aren’t getting the care they need,” Price said.

TODD: “I noticed you’ve ducked the aspect of whether you can guarantee that nobody will be worse of financially.”

PRICE: “Well, I-I-I firmly believe that-that nobody will be worse off financially.”

David Brooks of The New York Times noted that Republicans are choosing between two right-wing visions. One is cruel, the other draconian.

“They’re declaring war on their own voters,” Brooks said. “There’s a wing of the party that say ‘No, that’s too much. We have to totally decimate them.’”

“Don’t throw the baby out with the bathwater,” he said. “We’re talking about lives! . . . Be careful we’re not losing the soul of our country . . . You have to put people first.”

Regarding employment, Todd’s show was the only one on Sunday morning to point out that Trump’s first monthly job-creation number—235,000 in February, cheered wildly by Trump supporters—was less than Obama’s number in the same month last year (237,000) and in 2015 (238,000).

One of Chris Wallace’s guests was Michael Needham of the right-wing coven Heritage Action for America. He warned of peril if the Republican attack on health care is only a half-hearted assault.

“If Republicans leave the architecture of Obamacare in place and we have death spirals and premiums going up under Ryancare, what do you think the 2020 elections look like?” Needham asked. “What’s the 2024 election look like? What’s it going to look like when a Democrat president puts in single-payer health insurance? That’s why we need to do this right, we need to do it right now.”

“They were not tapped,” Stelter said.

One of his guest was Michelle Ciulla Lipkin, the executive director of the National Association for Media Literacy Education. They discussed how it’s hard to discern reality from many web sites and television outlets.

Trump may like Russian President Vladimir Putin but his very own Rasputin is Steve Bannon, his chief strategist. On Fox, Margaret Carlson of the Daily Beast told host Howard Kurtz Bannon has taken “complete possession of Trump’s soul.”

Regarding possible evidence about Obama wire-tapping Trump, Carlson said “If the White House had something, I think they would’ve put it out.” Referring to Trump’s tweet about Obama being “sick and bad,” she said Trump “doesn’t have impulse control.” 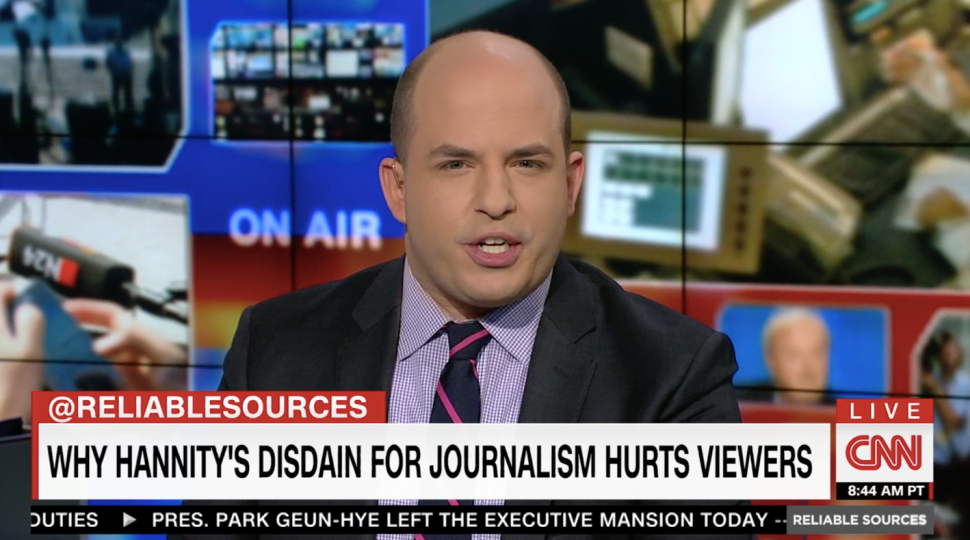