This show is officially the worst reality show I have ever watched.

Let me explain: I love reality shows. I love the idea of people trying to be on their best behavior, but cameras managing to capture people at their worst. But every reality show, even the most “true to life” reality show has an element of fiction to it. This is due to the very unnatural scenario of being constantly filmed by a crew of people. Even if you went about your day and learned to ignore their presence, it would still be difficult to act completely normal. It’s like when your crush walks into the room – you either shut down or put on a show, an affectation, a performance.

But for a reality show to really work, there needs to be some level of authenticity to the whole enterprise. This includes having a cast that is already friends and know each other, and have complicated relationships that can be explored. Or, even if they never met each other, having conflicting personalities that make the act of meeting a guaranteed drama-fest. The level of authenticity directly correlates to the level of investment a viewer has. A viewer knows when he or she is being played when the drama is too obviously fake.

It’s why Keeping Up With The Kardashians can often be so boring and trite. It’s why some seasons of any given The Real Housewives franchise can feel so dull. It’s why so many shows have been one-season-wonders: if the drama cannot be sustained without a level of plausibility, it turns viewers off.

It is therefore not surprising that the best reality shows will occasionally break the so-called “fourth wall” and openly acknowledge the artifice of the situation to keep that level of plausibility.

This episode showcased everything bad about reality television: blatant, clunky advertising; contrived get-togethers that, incidentally, only included the main and tertiary cast; and fake drama that, when revealed to be fake, felt cheap.

Let’s start with the clunky advertising. The episode was brought to us by Maybelline, so of course, So Cosmo clunkily added a scene in Joanna’s new office to show us Maybelline’s newest mascara product. I’m all for product placement, especially if it makes sense and is seamless. But Maybelline’s product placement FELT like an ad.

And then we have the contrived get-togethers. First, a “sex personal trainer” comes into the office and the only employees present also happen to be cast members. There is Diandra and Tiffany, Steven and James, Leah and Adam, and…Evan.

So Cosmo’s biggest problem is also it’s only interesting thing to watch: Evan Betts. Evan is, at best, a freelancer who occasionally comes into the office. He is barely an employee, yet he is at every event and meeting where many full-time employees are noticeably absent. So when he attends the “sex” exercise class with only the main cast members, his presence makes it feel contrived.

Evan is the literal embodiment of “breaking the fourth wall” because he so obviously doesn’t belong there. It’s one thing to take Tiffany rock climbing for a personal training session because that’s true to who he is and what he does, but having him go to the Hamptons house with a few select employees (that, incidentally, are cast members of this show) is quite another.

But Evan was obviously brought on for a specific reason: to be Diandra’s will-they-or-won’t they drama partner. The chemistry they have feels real, and they seem to really like each other. Their relationship, because it’s so compelling, makes me care less and less about the rest of the cast and the goings on at Cosmo.

Which brings me to what bothers me the most: the whole fakery of the drama. Working in an office can be filled with drama. It’s why the concept of this show is, in theory, a great one. If they had really shown the reality of what goes on in the office, they would be able to film real drama. As such, that would feel authentic and real. But the drama that is shown on the show feels made up for the show. It’s possible that Cosmo wanted to “protect” their brand (Joanna Coles is an executive producer), thereby only allowing sanitized drama to pass through.

But to have Tiffany pretend to be “creeping on Diandra’s man,” (as if Diandra really had a right to care since she rejected him, as the accessories editor Nicole astutely pointed out) felt scripted. It was so out of the blue that I was just as confused as Diandra when it seemed as if Tiffany were “making moves” on Evan.

Throughout the episode, Diandra goes from denial that it bothers her, to frustration, to outright anger. When she sees Tiffany and Evan sneak into the steam room for the second time that day, Diandra couldn’t help but follow and confront them. But that confrontation turned out to be a set up: Tiffany just wanted Diandra to admit she had feelings for Evan. So she set up this whole “affair” to make Diandra jealous to the point where Diandra would just confront her feelings and actually get together with Evan.

That sounds great and all, but to make the entire episode focused on Tiffany “moving in” on Evan and for it to all turn out to be this big set up merely revealed the artifice of the entire enterprise. When the big reveal came, I wasn’t pleasantly shocked – I felt empty, like I had been delivered a cheap shot.

It made me less invested in Evan and Diandra’s relationship, so that even when they kissed in the hall (pretending like they were hiding from the cameras, and the camera crew going along with the charade by positioning themselves as if they were trying to “discretely” capture the moment), the warm and fuzzy feeling that I would normally feel in such scenarios was missing.

And if a show, by its very artifice, can kill the warm fuzzy feelings that I am such a sucker for, that makes it so easy for me to like some pretty terrible television shows –– it is, in my opinion, worse than bad; it’s unwatchable. 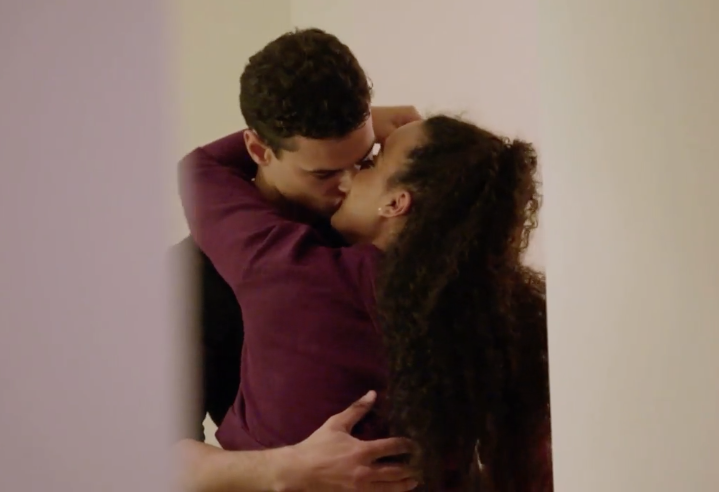