This is the kind of episode that seems to have such promise in the previews, and then it utterly disappoints, leaving the viewer feeling underwhelmed and annoyed.

In that vein, Tiffany at Milan fashion week was annoyingly underwhelming. Sure, we got shots of Tiffany and James looking glamorous and taking selfies in front of the Duomo. But either they didn’t go to a lot of shows, or they cut out that footage, because it looked like Tiffany, went to one unnamed show, a Casadei presentation, and had plenty of time to have lunch with Philipp Plein before his show.

Perhaps Philipp Plein was the only designer willing to have his fashion show filmed (which I doubt since many other shows manage to get filmed a la The Rachel Zoe Project), or perhaps he paid E! to promote his collection (this is the second episode in a row we’ve seen him). Either way, Tiffany and James attended the Philipp Plein show, a fantastical “candy-land,” to quote Tiffany. They were enjoying themselves, smiling and admiring the set Philipp Plein created: the classic amusement park swing ride next to a fantasy suburban neighborhood painted in garish but fun colors. But then, tragedy struck. An announcer introduced the show, “Welcome to Alice in Ghettoland!” Tiffany’s face instantly tightened. She was offended, distraught, but kept it together to make sure she got a look at the clothes going down the runway.

There was nothing ghetto about this show unless you think a colorful, circus fantasyland is ghetto. But Tiffany was offended by Mr. Plein’s appropriation of “ghetto,” as a title for his collection. “Ghetto” is a word that is offensive to her, a word that calls to mind negative stereotypes of people of color.

As much as I respect a person’s right to be offended by others, I feel like Tiffany is overreacting – Europeans do not have the same sensitivities as Americans about things like that. And he clearly didn’t mean it in a negative way (the set for the fashion show looked super fun). I’m more offended by how tacky and ridiculous the clothes were (but, then again, this is exactly the kind of clothes popular with a certain set of pseudo-socialites. I’m looking at you, Kardashian Klan).

Yeah, it’s pretty tasteless that he titled his show that way, but that’s Plein’s specialty: he traffics in the tasteless and over-the-top. It’s an aesthetic that can be eye-numbing, but it’s also why his work and his shows are so fun.

Which is why Tiffany’s reaction seemed a little bit exaggerated. And it likely was – this is a reality show, after all. She seemed so depressed after the show. And, when she got back, she met with Joanna about her concerns with the Philipp Plein show. Joanna told Tiffany that he probably didn’t think it would be offensive because he’s European, which is the logical and reasoned explanation.

But Tiffany was having none of it; for her, it’s a designer’s responsibility to be conscious of offending people. And although Tiffany acknowledged that artists have a right to take inspiration from the world around them, she still thought that this was an inappropriate way to title the show. This is probably because calling the show “ghettoland” felt like a personal insult. She’s from the Bronx, from an area that is often called the “ghetto” in a negative way. I get that, but the fact that it was made into a mini-storyline so that Tiffany could take that opportunity to lecture and criticize the fashion industry made it feel fake and forced.

It’s common in the reality television world to perform a “bait-and-switch,” where the previews and “coming up” pre-commercial bits seem to indicate one thing, (generally something scandalous), but, it ends up being the complete and total opposite of what you thought would happen. When Steven and James go on a “girl’s trip,” there are many sexual innuendos and playful banter. And so when the wine is flowing and there is a dearth of good looking men on Grindr up in the Poconos, the logical conclusion would be that these guys hook up, right? Wrong – James spread the rumor for the sole purpose of getting Steven to laugh, because Steven had been so tense lately. Making up rumors doesn’t seem like an intelligent way to get a tightly wound person to relax, but it somehow worked.

So Cosmo seems to like when conflict wraps up quickly in an episode. But that’s not how life works – things don’t always work out so neatly. Too many things were started and resolved that it felt contrived and forced (which is saying a lot – this is reality television).

Reality shows need a hook to attract viewers (i.e, get an inside look at what it’s like to work at a top magazine!), but they are sustained by drama. So this “rumor” was not real, it was manufactured to look like drama. The problem with this is that, once the rumor is revealed to be false, it wasn’t a relief that the episode concluded that storyline, it was annoying. It was underwhelming. It felt cheap.

Surprisingly, Diandra was the least dramatic one in this episode. Which is probably because she was actually doing her day job instead of her “acting” job. She did get a few “talking head” jabs at Steven, but at least that drama between her and Steven felt real because that kind of conflict would actually happen in an office. Diandra wanted to smooth over their heated discussion from last week, but Steven was having none of it. Steven was stressed out and acted rude to Diandra, who walked away upset. But clearly, the weekend in the Poconos did him some good because at a happy hour organized by Diandra, he apologized to her in front of everyone.

But again, the conclusion to that conflict felt too neatly packaged, too scripted, to be real. It’s almost as if their contentious relationship was made up for the cameras. And the way that they interact with one another underscores this – she has a cute nickname for him (“Stevie”), they both smile when they see each other (and not in the polite way, but in the “we’re friendly colleagues way”). But it’s a good storyline – the rude, obnoxious co-worker and the ambitious but sweet adversary going through a rollercoaster of making up and battling it out. The problem is, I don’t believe that it exists within real life. And that is a problem since reality has to have elements of truth and reality for it to resonate with viewers. 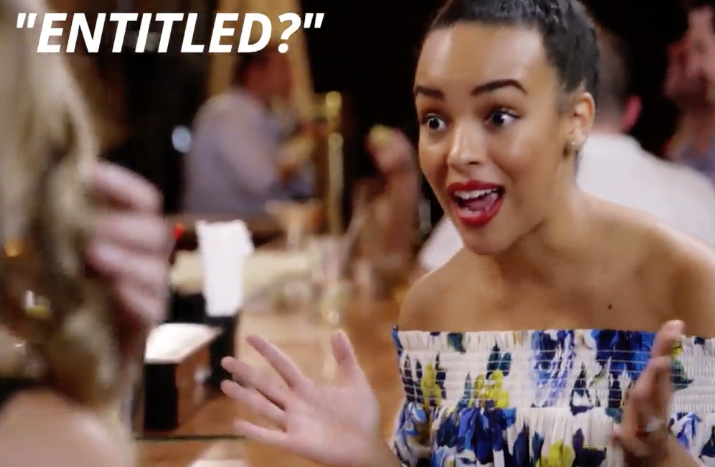