Republican Assemblywoman Nicole Malliotakis—the former New York chair of Florida Sen. Marco Rubio’s presidential campaign—today urged the Department of Justice to follow through on its threat to deny New York City federal dollars unless it ends its policy of noncompliance with Immigration and Customs Enforcement.

U.S. Attorney General Jeff Sessions announced on Monday that he would make full cooperation with ICE a condition of receiving law enforcement grants from his agency, the latest step toward implementing President Donald Trump’s January executive order cutting off funding to so-called “sanctuary cities.” Mayor Bill de Blasio coolly dismissed that declaration as an idle threat, and maintained that the NYPD and Department of Corrections would continue ignoring federal requests that they hold undocumented individuals in custody unless the person in question has committed certain violent crimes.

The assemblywoman, herself the daughter of Cuban and Greek immigrants, called on Sessions and Trump to call the mayor’s bluff—and deprive the police department of tens of millions of dollars unless de Blasio backs down.

So far, de Blasio has vowed to sue Washington should it refuse the city any funding. Malliotakis highlighted the liberal Democrat’s $84.67 billion proposed budget for the coming fiscal year—containing “so much nonsense”—and hinted City Hall could compensate from any loss from its own coffers.

“They just want to play this political game, where they get to blame, you know, the federal government, and blame Jeff Sessions, and blame President Trump for withholding funds,” she said. “This is going to be up to the mayor, and it’s on him if we lose the money.”

Malliotakis’s Staten Island-Brooklyn turf is home to a sizable population of active and retired cops and their families. She interrogated the mayor in Albany earlier this year about the wide range of offenses, including forcible touching and grand larceny, that foreign nationals can commit in the five boroughs and still dodge deportation thanks to city policies.

The mayor, for his part, has signaled his willingness to broaden the circumstances under which the NYPD and Corrections will oblige federal authorities—but City Council Speaker Melissa Mark-Viverito has fiercely rejected the suggestion. His office reacted to Malliotakis’s comments with outrage.

“We’re the top terror target in the country and these grants provide critical funding to the NYPD to help keep New Yorkers safe,” said spokesman Seth Stein. “We find it pretty shocking and flat-out irresponsible that Assemblywoman Malliotakis would encourage President Trump to withhold this funding.”

@WillBredderman @NYCMayor The mayor is the one being irresponsible by jeopardizing the funds. Follow the law, get the funds. Simple as that.

Malliotakis and Assemblyman Ronald Castorina, a fellow Staten Island Republican, have clashed with the mayor and speaker before. The pair took the city to court late last year to prevent it from activating a “memory hole” clause in the bill that established the city’s municipal identification program, which would have enabled the administration to wipe the program’s files at the close of 2016.

Those records are believed to hold the personal information of thousands of unauthorized immigrants, for whom the program was designed, and the Council added the deletion proviso to the legislation as an explicit precaution should a deportation-happy candidate win the White House and seek to requisition the databanks.

Malliotakis and Castorina obtained an injunction, compelling the city to announce it would no longer retain copies of IDNYC applicants’ paperwork. Both Republicans have stressed they favor a pathway to citizenship for those undocumented individuals who have resided in the country for a long period and have committed no other crime, and framed their legal case around the issue of national security.

Staten Island was the site of one of ICE’s earliest enforcement actions in the five boroughs under Trump’s agenda of increased arrest and expulsion. 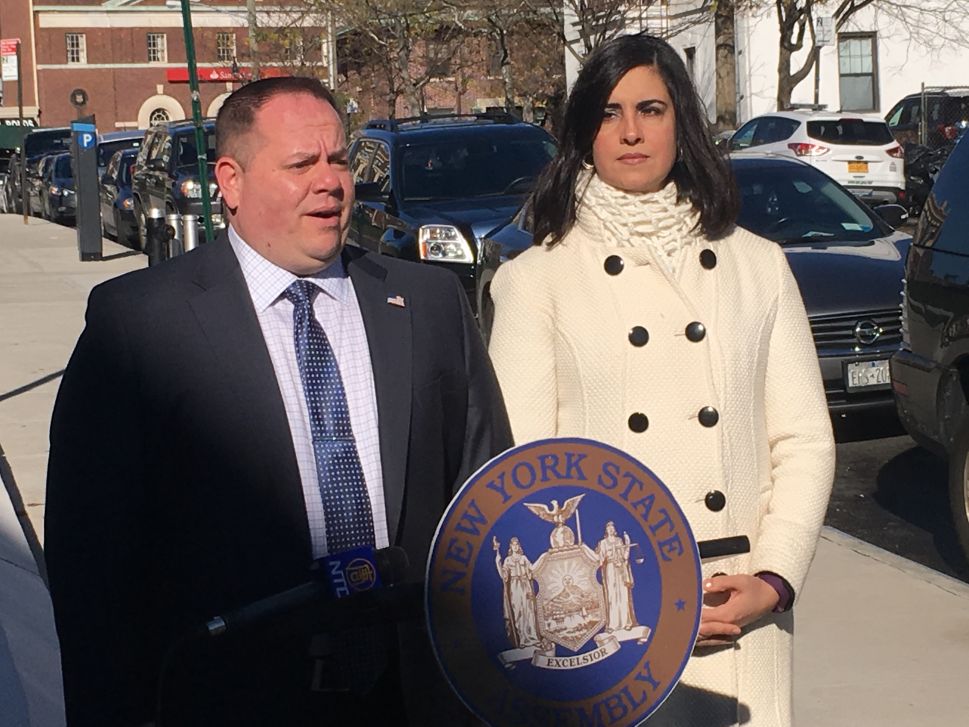