While Rachel Maddow took a victory lap on the Tonight Show with Jimmy Fallon on NBC on Wednesday night, a different Maddow appeared on The Late Show on CBS with Stephen Colbert.

Dressed in the Maddow uniform of black blazer and with his hair combed in her style, Colbert spoofed Maddow’s Tuesday night scoop-toid on MSNBC about the 2005 tax returns of President Donald Trump.

Colbert pretended to be Maddow telling an old joke.

“Why did the chicken—but first a word on chickens,” Colbert’s “Maddow” said.

He went on to exaggerate Maddow’s lengthy narrative style, with frequent, long digressions amid the rolling of her eyes and the brisk stacking of her script on the desk. He mocked her awkward pronunciation of Russian names.

Maddow’s loyalists—and they are many and growing in number—must have smiled grudgingly when Colbert imitated her vocal cadence, with its pregnant pauses, and her body language, with its elaborate hand gestures.

“Why did the chicken cross the road?” “Maddow” finally concluded . “The answer right after this break.”

This was Colbert’s allusion to The Rachel Maddow show Tuesday when she took 22 minutes—including a long commercial break—to get to her buried “lede” that Trump paid $38 million in taxes in 2005 on income of $150 million.

The information had been mailed to reporter David Cay Johnston, Maddow’s special guest.

For almost 90 minutes before Tuesday’s show, Maddow over-hyped the story on the internet. By the time she got to the point, the White House already had offered its response to the revelation and other news outlets had reported it.

Despite widespread criticism of her big sell of a small scoop, Maddow came out a major winner. Due at least in part to her cynical manipulation of the audience, Maddow scored her best rating ever with 4.1 million total viewers, including 1.4 million in the prime advertising demographic of ages 25 to 54.

Maddow’s show was the third-ranked that night in all of TV for the 9 p.m. hour, behind This is Us on NBC and NCIS: New Orleans on CBS. In the cable news subgroup, The Rachel Maddow Show beat Tucker Carlson Tonight on Fox News Channel (3 million, 594,000) and Anderson Cooper 360 on CNN (1.1 million and 396,000).

Many of Maddow’s Tuesday viewers were probably first-timers lured by her Twitter messages. Like Trump, she exploited the platform. Those new viewers were exposed to Maddow’s curious habit of setting up the gist of her stories by first explaining—at great length—lesser details for context.

“In just a second, we are going to show you exactly what it is that we’ve got,” Maddow said at the beginning of her show. In fact, it was more than 1,260 seconds before she eventually waved the two pages of Trump’s tax returns on camera and told her audience of the less-than-scandalous numbers in them.

“My priority is to get the story right and put it into proper context and explain the weight of it and why it is important,” Maddow told the Associated Press. “This is a super interesting first window into his finances. And the question of his finances is a legitimate scandal.”

Certainly Maddow has been hinting for weeks at scandal involving Trump and the Russians. In her windy, winding preamble Tuesday, she reviewed some of her strongest recent stories, including Trump’s sale of a Palm Beach mansion for $100 million to a Russian oligarch.

Trump made a $60 million profit after paying only $40 million for it in 2004, less than four years earlier. Maddow strongly implied that the Russian, Dmitri Rybolovlev, was a shady character linked to a Cyprus bank that allegedly launders Russian money.

Connecting more dots than most other hosts, Maddow showed a photo of the oligarch’s plane parked near Trump’s jet at an airport during the campaign.

She spoke—and spoke and spoke—about “the president’s financial and business entanglements” and wondered whether they influenced his policy decisions. She bluntly hinted that more extensive Trump tax returns might reveal bigger secrets that Trump doesn’t want exposed.

She even showed a photo of a 16-foot inflatable chicken with Trump-style hair that tax protestors want to display on April 15 in Chicago. Perhaps that bizarre touch triggered Colbert’s chicken theme.

Maddow’s ratings have surged since Trump’s inauguration. She has become the star of a network filled with hosts who lean left and toward the Democrats, particularly in prime time.

Part of her appeal is to progressives and liberals forming an anti-Trump “resistance” movement eager to be reinforced. Maddow also may have benefited from the departure last year of a top competitor, Megyn Kelly, from the 9 p.m hour on Fox.

When Maddow began her show in September of 2008, she seemed to be a protégé of Keith Olbermann, then the MSNBC star in the 8 p.m. hour. He left the network in 2011.

Maddow unspooled more yarns Thursday night, eventually getting to the point of a story about Trump’s former national security adviser, Mike Flynn, who was told to resign for discussing sanctions against Russia with the Russian ambassador and then lying about it.

Maddow suggested that more revelations might come Friday about why Flynn’s dealings were monitored by American intelligence agencies. “Scandal,” was a word she kept repeating Thursday.

One of the details of her lengthy setup mentioned a Russian transport company called Volga-Dneper.

Her side comment indicated she absorbed Colbert’s ribbing with good grace.

“I’m not going to pronounce this,” she said of Volga-Dneper, “because Stephen Colbert will make fun of me if I try.” 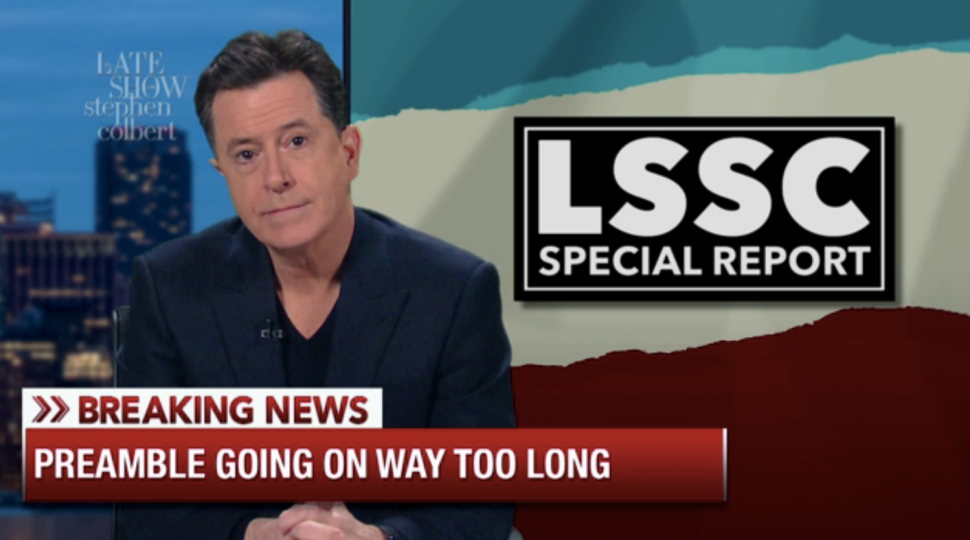