A day after Mayor Bill de Blasio released his long-awaited plan to shrink the city’s homeless shelter population, Department of Social Services Commissioner Steve Banks said he won’t join the exodus of high-ranking officials from the administration—saying he plans to finish “what I started.”

Yesterday, the mayor laid out proposals to reduce the homeless population, which has reached an all-time high of 60,000 people, by 2,500—or about 4.17 percent—over the next five years. The plan also included designs to open 20 new shelters this year and 20 new shelters next year, leading up to a goal of opening 90 such facilities over the next half-decade.

Banks gained a reputation for suing the city multiple times on behalf of the homeless during his past career as a Legal Aid attorney, and called his role in combating the crisis as a commissioner “an opportunity of a lifetime.”

“This is one great opportunity to be able to fight homeless in the de Blasio administration,” he said at a Crain’s New York Business breakfast this morning. “I am very committed to finishing what I started.”

A number of de Blasio’s top appointees have stepped down over the past several months.

In January, Vicki Been, commissioner of the Department of Housing Preservation and Development, announced she would leave her post to resume her old job at New York University’s Furman Center. Carl Weisbrod, chairman of the City Planning Commission, also resigned to become chairman of the Trust for Governor’s Island, a city-owned non-profit.

The 90 new facilities in the mayor’s new homelessness plan will replace 360 troubled commercial motels and apartments where the city has lodged indigent individuals and families. The proposal relies heavily on existing housing programs to get people out of the shelter entirely, and de Blasio stressed repeatedly that progress would be slow and onerous.

Banks heaped praise on his boss’s new plan, which he said was the third phase of the city’s agenda for containing the mushrooming homeless population. He also echoed the mayor’s claims that combination of economics and decisions by the state and prior mayors that created the crisis.

“What you heard from the mayor yesterday was a very, clear operational pathway forward to achieve fundamental change in the way New York City has provided services for homeless people over the last nearly four decades,” he said.

He said the first phase was about stabilizing the exponential growth of the shelter system, which led to the city preventing the homeless shelter population from reaching 70,000—even though it broke the record benchmark of 60,000. The second phase, he said, was when he led a 90-day review to address the rising homeless population and the poor conditions of temporary housing.

In September, Maspeth residents outraged over the planned conversion of their neighborhood’s Holiday Inn to a homeless shelter staged a protest in front of Banks’ home in Brooklyn. The city backed away from the proposal, and yesterday de Blasio promised to create “community advisory boards” for each area of the city receiving a homeless shelter to consult his administration on best locations and practices.

Nonetheless, the core of the new plan calls for every neighborhood that has homeless natives to host a shelter to house them. Banks said today that he thinks it is important to focus on “where there’s unity,” asserting most New Yorkers are compassionate whatever their initial qualms about putting up homeless people in their community.

“Look, the reason why we are doing what we’re doing is because we’re very focused on human beings and human beings, children, adults deserve better than what they have gotten from a city shelter system which was developed in a haphazard way over multiple decades and we’re very committed to reimagining and reforming that system, shrinking the footprint,” he said. “And I think what we found is when we opened shelters for the most part New Yorkers are welcoming.” 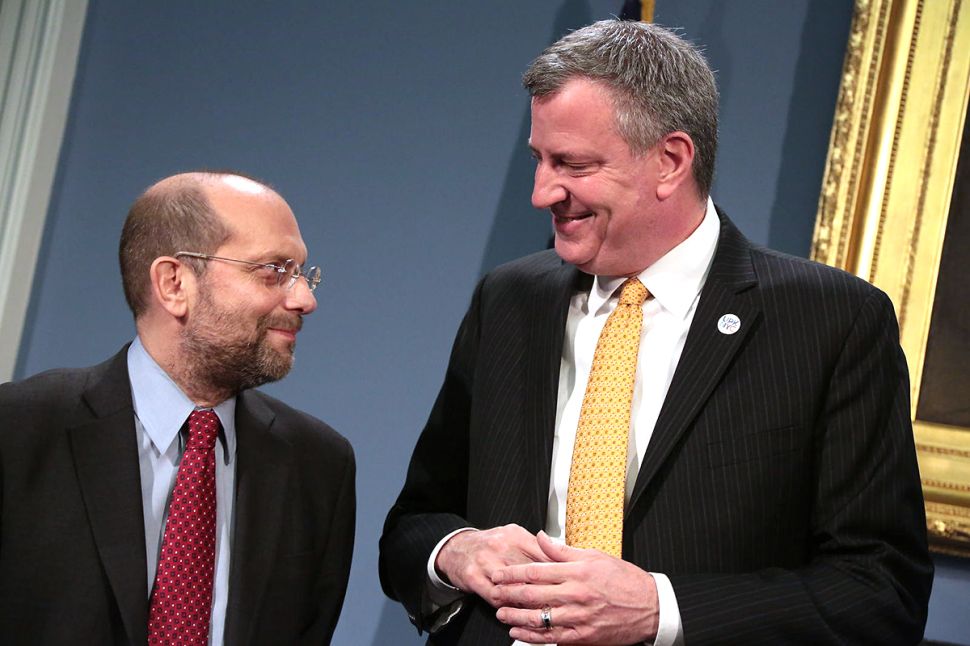