The beauty of a good reality television show is that it brings all sorts of people into your life. For example, I probably wouldn’t have ever met an eighteen-year-old Eagle Scout at this point in my life. I’m too old. Plus, I quit the Cub Scouts when I showed up at my third meeting in 1993 and they handed me a block of wood and some wheels and said make a car out of this. Two words—I’m gone. And yet, thanks to Stranded With a Million Dollars, I have now been introduced to Michael, an eighteen-year-old Eagle Scout, who had one of the most wicked TV runs of all-time.

First, Michael is the tie-breaking vote last week against buying a machete. This is a tool the group clearly needs but they are hypnotized by Cody, who secretly (or even not so secretly) wants to make things as uncomfortable as possible so everyone will bounce. Then Michael goes along with Gina on the Temptation and they spend $15,000 on hamburgers and wings and don’t even finish the whole plate. Then Michael, the Eagle Scout who very much knows how to survive outside for forty days, offers up his shoelace for a DIY bow drill which immediately snaps due to this force known as friction. Ashley also offered up her shoelaces and another one bites the dust like a Queen encore. Because Michael and Ashley have nothing to keep their shoes on, their shoes fall off during the three and a half hour hike the group had to do to get their next $100,000. Ashley shot her flare off first because she didn’t want to hold the group up. Michael tossed away his shoe that wouldn’t stay on. He did some more of the trek barefoot. And then he pulled the trigger as well. Three days and six hours, his streak was over.

Okay, so mistakes were made. Never give up your shoelaces. But if you do, don’t throw away your shoe. Who throws a shoe? This is the most basic level of Austin Powers references. Don’t throw a shoe, don’t eat a baby. What if you get to the checkpoint and they’re like you can buy a new shoe for $13,000 or a new shoelace for $3,000. You just cost everyone ten grand. What if you rip up strips of your shirt and thread it through? What if the Eagle Scouts taught you anything about hiking? I mean he probably knew he was going to quit at that point but never leave anything behind. Also, why are these people quitting because they can’t make the checkpoint? This is a game show. If you can’t make it, you stay around and try next week. Yeah, everyone might be mad at you for losing the money but that’s on them. It’s not up to you to facilitate them getting money. Maybe they make it on this hike but quit a week later. You’re still there, you can still win. This upright citizen call of not wanting to hold the group up is a terrible decision or a cop out.

By the time they get to the checkpoint, the ten contestants are down to seven. Easy money made because there are fewer people to split it. But the show notifies the group that Gina and Michael took the Temptation and they are down $15,000. Gina gets all of the abuse because Michael is gone. But Alex is smart. They have to decide what their next buy is going to be and they need a majority. So Alex and Alonzo and Eilish forgive Gina and the four of them conspire to buy a two-person tent (30K), a fire-starter (35K), a pot (15K), a machete (10K), a backpack to carry the money (10K), and a pizza (5K). Because they have the four votes, there is nothing Cody, Chris, and Makani can do to stop them. On top of that, the four make it clear that nobody who voted against the tent can sleep in there. So even though they used the community money, the tent isn’t for the community.

Cody is furious about all of this. He didn’t come out here to camp in a tent, he wants to survive. Makani is upset because nobody is listening to her. And Chris is upset because he has been humbled and learned his true weakness, he hates being wet. The pizza shows up and Cody refuses to eat it. Cody is that dude when it is raining in the middle of the night who looks at the camera and says “embrace the suck.” Cody according to Cody is thriving. Cody lets it be known that he would do far worse things for far less money. Chris is chosen for the Temptation and brings Cody along. For $15,000 they each get an outfit and some food. Cody doesn’t take the underwear because he doesn’t wear it when he’s out in nature. I don’t really blame them for taking it, the other side spent $105,000 on stuff and won’t even let them sleep in the tent. At least they got ponchos and some blue baseball caps that Cody thinks makes them invincible.

Alex and Alonzo really don’t let Makani into the tent that night. And the next morning she calls out the group. Then Alonzo and Cody get into a fight like “I’m gonna split your face open” and Cody is like “do it” and Alonzo is like “you’re not tough” and Cody is like “you’re sleeping in a tent” and it’s the first time someone sleeping in a tent has been used an insult which is awesome. They don’t fight and that is good because I don’t like violence but I am curious to see if the producers would use those drone cameras to break up a fight or just let them go at it or what. And so the episode ends with some people thriving and some people in a tent and not a lot of money to split between seven people because they spent most of it. Y’all better balance your budget. 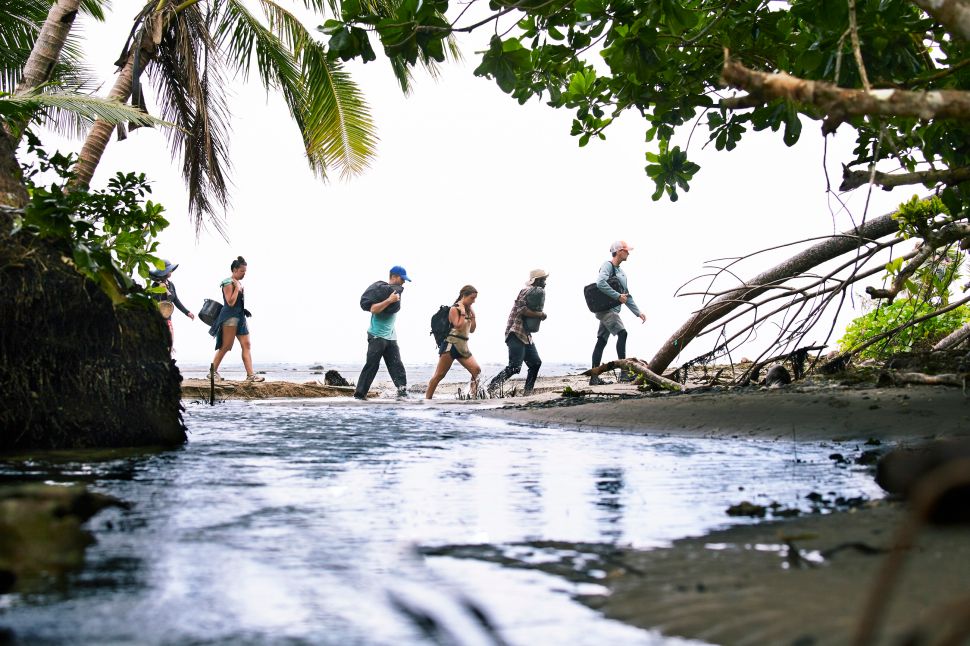