Poor, poor humbled Chris. Or should I say “pour, pour humbled Chris” because he hates , get it? Chris—one-half of the thrive bros—is not thriving. Now he has to go back working for “the man.” AKA his dad. He’s been doing it for a year and is kind of over it. Poor, poor nineteen-year-old Chris, who doesn’t want to work construction for his dad but can’t stand the rain like Missy Elliott in a garbage bag.

The camp is split. Cody had a strategy that was to make everyone else uncomfortable by not buying things because he knew he could outlast them all. That worked for a bit. Then Alex also had a strategy. Secure a majority of votes and buy supplies for your majority, denying access to these supplies to the part of the group voting against it, giving the majority an advantage. So Alex and Alonzo and Gina and Eilish have a tent. And Makani is testy. Chris is wet. And Cody is sounding more and more like Matthew McConaughey every episode, which I guess could be considered thriving.

Makani gives off an air that she is maybe part woodland creature. I think she just might live in a glen somewhere next to a stream all year round. Or like in an underground mud cave with the Beavers from The Lion, the Witch, and the Wardrobe. If by the end of this 40 days, she doesn’t pop out the swamp like Dutch in Predator then we were robbed. Makani and Eilish get into it because at this week’s group buy Makani’s like, “you guys need anything else to be comfortable like a mosquito net or a chandelier for your tent?” Eilish gets hyped up but she should just be like “I can’t hear you over the sound of this tent I’m in when you’re out in the rain, sorry.” On this island, the worst insult anyone has got is “you sleep in a tent” but still you get to sleep in a tent so that insult should just drip off your back like off the roof of a tent. But I don’t think you can rattle Makani—like during the big final rainstorm that sends Chris packing, the shelter her, Chris, and Cody are laying in collapses with them inside. Chris and Cody dip out but Makani just lays under there like what’s the big deal, this is fine, I like it even, I think it is good—and not in some twitter egg avatar kind of a way.

Makani steals some food from Alex’s group that they left out and her and Cody eat it. It’s a pot of taro root, which is like a White Castle Crave Case on this island. Alex and his side aren’t happy about it but for real, they have a tent. In the meantime. Alonzo is fading. He talks about his PTSD from going to war and I have to imagine that this kind of stress on your body and mind isn’t that healthy. He gets offered a Temptation but decides not to take it because he’d be eating while Alex was still starving. Alex is so surprised by this, it feels like he absolutely would have taken it. It was food, and clean drinking , and the use of a bathroom, and a shower, and a night in a real bed. I mean really, who among us doesn’t want to sit in a bathroom facing nature like that toilet Richard Branson has overlooking his private island we saw on his episode of Cribs?

Because there’s about to be a huge storm, the group gets offered a flash sale where some of the items have been reduced in price. But instead of getting a tarp, which is what Chris and Cody want, the majority buys a jar of peanut butter for $3750. Everyone gets a taste but later that night when the storm hits and the shelter collapses, Chris decides to fire his flare because peanut butter can’t keep you dry, even if you spread it all over your body like a tarp. His goodbye is so coldblooded for so many reasons. First, he goes to the tent to tell the dwellers he’s bouncing. And Eilish sticks her hand out and is like “I’m not gonna come out there but I’ll shake your hand.” Brutal. Nobody in there tries to convince him to stay, which okay why would you? Cody’s multiple pep talks have already failed. Even the blue hats weren’t enough. But still, it’s pretty funny to hear all of them in the tent try not to sound excited about him quitting. They’re like “oh. Really? How sad…k bye.” The best own is that I guess the helicopter couldn’t land in the storm. Chris is so miserable, all he wants to do is get out of the rain so he quits. But they make him sit out there in the typhoon lagoon until morning. When the helicopter finally arrives it’s light out and Chris is soaked sitting on a log. If he was going to be forced to wait it out, he may as well have not quit. Amazing. If the helicopter could land and they just made him sit there anyway. Also amazing. Either way, great television.

Next week, it looks like there will finally be a tent coup. I am so excited by the idea of a tent coup. I want to thank this show so much for making one pup tent the source of endless hours of entertainment. Truly, an amazing accomplishment. 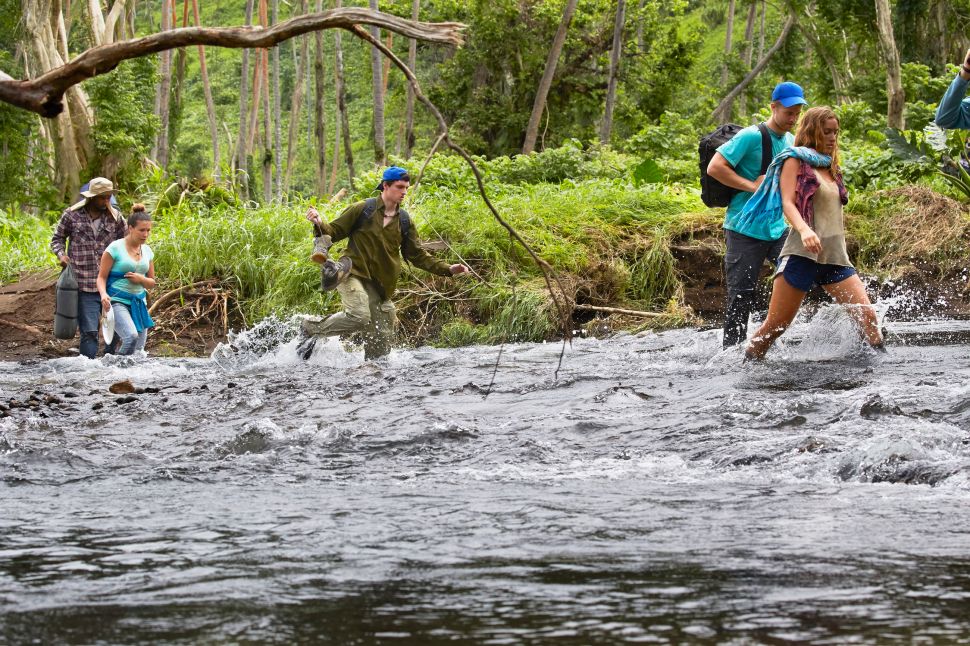