Last night made me question whether or not George Lucas is even decent. You know what is inherently interesting? An intergalactic battle between good and evil forces, robots, aliens, space royalty, Carrie Fischer. Star Wars is a layup. It’s picking on your little cousin. It’s Good Will Hunting setting math worksheets on fire because they’re too easy for him. You know what is not inherently interesting in any way? Tents. Usually, the most interesting thing about a tent is who you are inside of it with. Tents are the thing you bring camping every year and forget how to put together, because it’s been a while and there is nothing memorable about a tent. They leak, their zippers break and let the bugs in, and you can feel every rock through the bottom. I’m not saying that a tent has never been important or saved lives. What I’m saying is when you think you dramatic action, you probably don’t think Tent Wars. If you can make something already interesting stay interesting, then you’re pretty good. If you can make something uninteresting become interesting, then you are the greatest. Last night on Stranded With a Million Dollars they made tents interesting.

The Core Four of Alex, Alonza, Eilish, and Gina have a tent. Makani and Cody have no tent. If they had a tent, Chris may have made it through the rainy night instead of quitting and still having to sit through the night of rain while he waited for the eviction helicopter to land. Makani decides that she is going to get that tent. There are strengths and weaknesses to both of these teams. The Core Four has a majority and can vote for whatever supplies they want. Alex seems to have a clear strategic plan to win the game. There is strength in numbers. But they don’t seem to learn from their mistakes. Last week, they left a pot of extra food unguarded after they had finished eating. Makani took the pot for her and Cody to eat. This week, Alonzo puts down the tent after they make it to the latest checkpoint. And Makani swoops right in and grabs it. Possession is ten-tenths of the law on this island and Makani will steal your stuff. Alex mentions a rule that says they can’t just drag her out of the tent and Makani refuses to leave the tent. Tent Wars.

When everyone goes to get , Makani is in the tent. When they do the group buy, Makani is sitting inside the tent. When she has to rinse off later on, she has the tent in the with her. Cody is down to let Makani have the tent because it takes all the focus off of him. The Core Four get the tarp off the tent, which makes it not waterproof. But Makani just flips it over and sleeps inside of it on its side. Alex and Alonzo and Eilish and Gina have to sleep on the ground, under the tarp. The four of them tuck under it like the movie poster for Bob & Carol & Ted & Alice. Which is fine until it starts to pour. Then they try to bring the tarp back to the tent and offer it to Makani who says nope. The idea isn’t that Makani wants to be comfortable. It’s that she wants the others to be uncomfortable. The tent is an advantage. So much so that rather than agree to share it, the Core Four decides to buy another tent for $30,000. Now there are two tents. Tent Wars.

They also buy a bunch of food and don’t share most of it with Cody and Makani. They give them one jar of peanut butter but not any of the $3000 hamburger or $3000 deli sandwich they got from the 7-11 for Millionaires. Their new strategy is to starve out the other team. Which is a good plan. Except that Makani gets offered the Temptation so her and Cody get a $15,000 meal. Cody eats so much, he has to run off into the bushes on his walk back. Side note to this, after he returns he goes to rinse off his butt in the drinking right where Alex is sitting having some which is the grimiest reality show move. Like it somehow feels even worse than washing the toilet with your roommate’s toothbrush.

All of a sudden this week, they’ve added an announced challenge into the show. And Cody and Makani win socks, mattress pads for their tent, and a bar of soap. When Makani and Cody go down to the river (only Makani uses the soap by the way, Cody is like “I’ll just get dirty again—grimy) the Core Four steal some of that peanut butter out of Cody and Makani’s tent. Tent Wars. Using his incredible Tent Sense, Cody knows that they stole it because he has zipped the zipper a certain way and could tell there was a breach. So, basically the strategy on the show for both teams now has become to out-petty the other side by spending money they don’t need to spend, stealing from each other, and buying lots of tents. If a bunch of people make it to the end and there’s only like 50 bucks left and ten tents, I will be so happy. It’d be completely worth it. My only question is, does someone get to take the tent home with them? If so, completely worth the cost. Now let’s see George Lucas try to make any of those things be interesting. 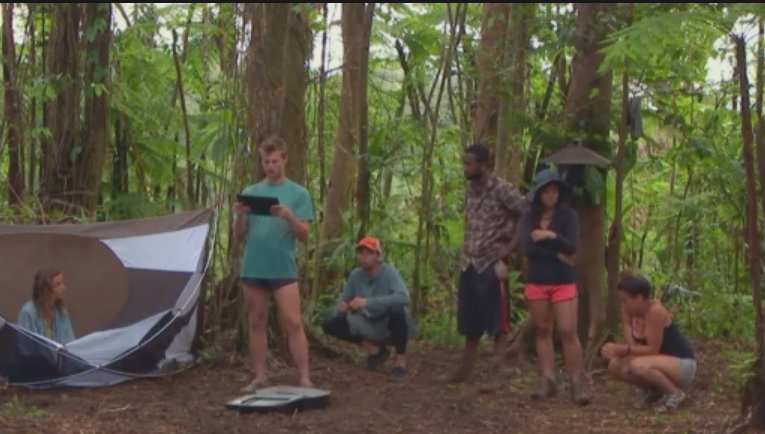