It’s been a few weeks’ worth of episodes with the current dynamic in place. The Core Four—Alex, Alonzo, Gina, and Eilish running the group vote. Buying up several tens of thousands of dollars worth of pizzas and oversized hamburgers like the All You Can eat scene in Krush Groove. Trying to starve out Makani and Cody one minute, agreeing to get them food the next, then stealing that food on the third. It’s a Terror Tower of emotions. But all of that is about to switch up. Like Jay-Z said, “first the Fat Boys break up, now every day I wake up somebody got a problem with Hov.”

Alonzo and Eilish are out. The majority is now not a majority. The days of the $45,000 group buy may be over. This is sad for me as I most definitely am still rooting for them to spend all of the money. Alex has said multiple times that he is down to spend $30,000 to make a million dollars. And when it was in the context of the tent, it made sense. But since then, he’s said it approximately three-hundred thousand more times. “I would spend $3,000 to win a million.” “I would spend $15,000 to win a million.” “I would spend two million to win a million.” So far they’ve banked $600,000 and have spent half of it. Which means they are half way to spending it all! But nooooooooo, we’re probably not going to get that now because Cody and Makani want to actually win some money for spending 40 days out in the wilderness. Cody and Makani who spend $15,000 on food like carrots, and rice, and peanut butter which last a few days at a time, and don’t spend $30,000 on fast food you need to eat immediately.

It’s like Jay-Z said in his song Change the Game, which if you listen to the lyrics is actually about not changing the game, “I will not lose!” Cody and Makani are determined to not spend all of the money. They are also determined to get some of the Core Four to flare out so that they can stop the group buys from spending the prize down to zero (BORING!!!!). For this week’s excursion, the magical map tablet lets them know there are two options to the next camp site. One that is shorter but harder or a longer but easier route. Cody realizes that every week some of the Core Four people want to quit but don’t out of spite for Makani trash-talking them. So if they take the opposite route, people might call it quits without that extra motivation in their face.Two roads diverged in a wood, and I, I took the one that didn’t have Makani screaming at me on it. And that has made all the difference. Solid plan. It doesn’t work exactly but the Core Four are so wiped out from the trek, they leave a bunch of their stuff out on a rock in low-tide, thinking they’ll come back for it in the morning.

It’s like Jay-Z says, “change clothes and go.” The next morning, Alonzo comes back to the rock only to discover that high-tide is a thing and his socks are gone. He can’t survive without socks so at the next group buy they get lots of pizza and new $2000 socks. But Alonzo is in bad shape. He’s been drinking from some murky and is now doubled over. The doctor flies in and examines him. They think its gastroenteritis, which is said in just the loveliest sounding accent. I would happily accept any terminal diagnosis from this doctor if the news was delivered in such a pleasant way. Alonzo has the choice to stay or leave, so he quits before his new socks even show up. Alex quietly whispers “I’m proud of you” to his BFF as he is taken off the island. When the group drop comes Cody is like “how much is a stamp, maybe we can mail the socks to him?” A stamp is $750 and Alex’s group bought twenty-seven of them, just kidding they don’t offer stamps but they probably would if they could.

Next up, Eilish is offered a bbq Temptation but its pouring rain out and she’s feeling sick so they only take the $5000 option to get some clean . Eilish ends up calling the medic as well and they take her out of the camp for evaluation. She’s not expelled yet but the next morning she calls and says her appendix is being taken out so she has to quit, too. And within one episode, the majority is no longer a majority. It’s Alex, who does seem like he has a plan to go all the way. And Gina, who was about to quit week one and really actually only deserves props for making it this far, way longer than I thought she would and also longer than a lot of other people. They’re left to face Makani and Cody who have looked like (at least in their edit) that they are experiencing a mild and relaxing vacation and could continue to live like this for the rest of their lives.

Makani is so cold-blooded, when Alonzo gets sick and the medic comes she’s like “oh, I didn’t realize how serious this really was, I hope…” and then she takes this really serious pause like she’s about to go into how this is all just a game and she hopes nobody gets hurt, but instead she finishes with “I hope…it’s contagious and the whole other camp gets it and has to leave.” Makani is the scene from Tropic Thunder with Ben Stiller and the panda when he’s like, “I am the set.” Ben Stiller’s agent in Tropic Thunder is Matthew McConaughey, which is too perfect because the more time Cody spends out in the wilderness talking into a camera to himself, the closer his Texas drawl comes to busting out an “alright, alright, alright.” Next week is most definitely going to be incredible. 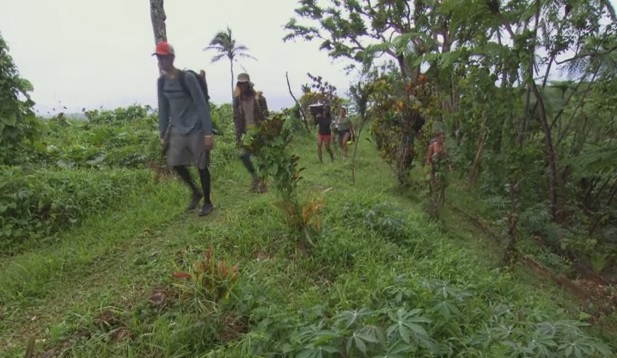