This fallacy insults the work of those who came before him and created the building blocks that the rolling, rocking art of our lives was built on. It also shames Berry’s seismic accomplishments. He was one of the most important artists of the last 75 years, and we don’t need to attach clumsy, inaccurate words like “founder” or “father” to his name to honor him.

No art form, ever, has spontaneously arisen. Once we accept that, we can fully analyze and appreciate the real genius of the artistic pioneers who have shifted and shaped our lives. The reality is always more spectacular than the hyperbole.

There are three prime factors that made Chuck Berry into a cultural giant. Two of these were remarkable innovations of his own design; the third was something that was outside of his control.

Much of the “early” story of rock ’n’ roll involves the transition from acoustic-based hillbilly groups, small-format or solo blues artists, and larger-ensemble jump blues bands into the electric trios, quartets, and quintets that defined rock music in the 1950s and ’60s.

Although hillbilly music (which had generally always been performed by small ensemble groups) made a relatively smooth transition to the small-electric-ensemble format (as evidenced by Elvis’ early work and other early Sun Records artists, such as Carl Perkins, not to mention the pioneering work of Hardrock Gunter) it wasn’t as simple or obvious for jump blues to make that transition.

The large format of the standard jump blues band, which relied on a heavy bottom defined by stand-up bass and saxes and a multi-piece horn section to underline melody lines, was less of a natural fit for the small-format electric band. Other early rock ’n’ roll artists had integrated elements of jump blues into the more compact palette: Elvis borrowed some of its famous songs and its vocal cockiness (which he transposed, miraculously and revolutionarily, onto a hillbilly framework), and Bill Haley placed a distinctly caucasian vocalist and a more prominently featured electric guitar into the standard jump blues line-up.

But until Chuck Berry, no one had attempted to streamline pure jump blues while keeping the melodic wit, swing, and improvisation intact.

Berry skins and dries the jump blues formula of Jordan, and Wynonie Harris, and others without losing any of the impact; in fact, it seems to get bigger.

The second innovation, just as revolutionary, came via Berry’s lyrics.

If Berry’s recordings, no matter how groundbreaking, had retained the culturally loaded iconography and (relatively) blatant sexuality in the lyrics of the great jump blues artists he loved and emulated, chances are he would have remained a cult figure.

But Berry deliberately played a different game, and this may be his greatest invention.

Unlike his predecessors, Berry dispensed almost completely with songs about wine, Hadacol, or the Saturday-night fish fry;[i] instead, he sang about an American teen life that knew little of race or class. He took the jump blues formula that had been drifting around for at least a quarter of a century and he applied lyrics that white teenagers could identify with.

This is deeply, hugely important.

Consider this: As Berry emerged, Bo Diddley was singing about chimneys made out of human skulls, the Treniers were howling about “Poon Tang,” and Roy Brown told us about “Butcher Pete” (who hacks, whacks, and smacks his meat).

But here comes Chuck Berry singing about high school, the girls you might meet therein, and other far-from-explicit boy-girl stuff that made sense to teens but wasn’t terribly offensive to radio or parents. No one’s wearing a cobra snake for a necktie in Berry’s songs.[ii]

Rock ’n’ roll was vibrant, alive, and more or less formed and recognizable long before Berry (in fact, it comes into clear focus between 1945 and 1950). But by eliminating iconography that was specific to the African-American experience from his lyrics, Berry made it possible for white American teens—and radio—to embrace the vastly appealing, bopping, and rocking and rolling jump blues musical genre.

Now for the third factor, the one that was beyond Berry’s control.

In the marketplace, format adoption is everything: VHS instead of Betamax, or the iPod instead of the Zune. To best explain this aspect of the story, let’s talk a little bit about television.

In 1941, the FCC and the NTSC (National Television Systems Committee) decided that American television would conform to a 525 scan-line system.[iii] This was a compromise; RCA (and subsidiary NBC) were already up and running with a 441 scan-line system, and the DuMont and Philco companies wanted to make sets with a far-superior 605 and 800 scan-lines. The United Kingdom, on the other hand, settled on a 625 scan-line system (this is why, until the onset of digital television, television pictures in the U.K. and Europe always looked distinctly clearer and cleaner than American pictures, and why, conversely, British DVDs and videotapes would not play in American machines).[iv]

Not to downplay Berry’s extraordinary inventions, but one of the reasons he is so very prominent in our thinking about rock ’n’ roll is because the Beatles and the Stones adopted his “format” as the prima facie format for rock and pop.

In addition to covering Berry’s songs, the Beatles wrote and played a lot of songs that were structured and arranged like Berry songs.

Chuck Berry’s music is the rock upon which the Beatle church is built. In the 1960s, ’70s, and beyond, as the Beatles became anointed as the most significant force and influence in rock-pop history, their heroes—namely Berry, Buddy Holly, and the Everlys—came with them, as the defining frame for the genre.

Reach into your gray cells a bit, and you’ll recognize that the Beatles didn’t write or play many songs that sounded like, say, Eddie Cochran, Bo Diddley, Johnny Burnette, or Howlin’ Wolf.

Others did, however, and it’s informative to contrast them: the Dave Clark Five and the Northwest punk bands (the Sonics, the Raiders, et al., even, to a degree, Hendrix) adopted a model that favored the charging, high-speed careening New Orleans rock ’n’ roll and the churning primitivism of Bo Diddley.

But the Beatles almost entirely omitted these influences from their recording repertoire, and generations of young Americans with guitars have followed that model ever since, which relied very heavily on the wit, taut melodicism, and rhythmic lead guitar sound of Chuck Berry. That influence, that choice, that model adoption, shaped the very idea of rock ’n’ roll as we know it.[v]

This is all meant to underline the stunning achievements of Charles Edward Anderson Berry, and I refer you to Bill Janovitz’s excellent Observer obituary for full details.

By talking a little bit about the elements that made Chuck Berry a genius, a giant, and someone who reshaped the music of our lives, I hope to show that by tearing down the myth of the father, we find someone so much better and worthy of our celebration, study, and mourning: A man who transcended his name, class, race, and time to become a sound loved by the entire world, but most importantly underneath it all, a true fan of music, like you and me.

[i] Hadacol was a potent, high-alcohol-content cough syrup that was a popular and cheap high in lower-income communities, black and white, throughout America in the first half of the 20th century. It is mentioned with unusual frequency in the pop, blues, and r&b songs of the era.

[ii] I specifically spotlight these lyrics from “Who Do You Love,” and here’s why: When Bo Diddley sang about this aforementioned choice in neckwear, he was echoing a line in the ancient—circa 1828—minstrel song, “Jump Jim Crow” (the term “Jim Crow” originated with a hugely popular minstrel song). By underlining this, we see how Berry made a clear break with over a century of racist and race-specific lyrical portrayals of African Americans.

[iii] That is, the standard television picture was made up of 525 lines.

[v] When citing the artists who shaped British rock, it is important to note that many British beat bands were deeply influenced by Johnny Kidd & the Pirates, an extremely important British rock band of the late 1950s and early 1960s, whose riffing, surly, snarling revision of Chicago Blues and New Orleans mega-beat rock (via skiffle and teenage primitivism) made an enormous impression on the Who, the Kinks, Jimmy Page, and the lesser-known, less polished Mersey Bands. The vast influence of Johnny Kidd & the Pirates on British rock—especially non-Beatles British rock—is something that is markedly overlooked in most American rock histories. 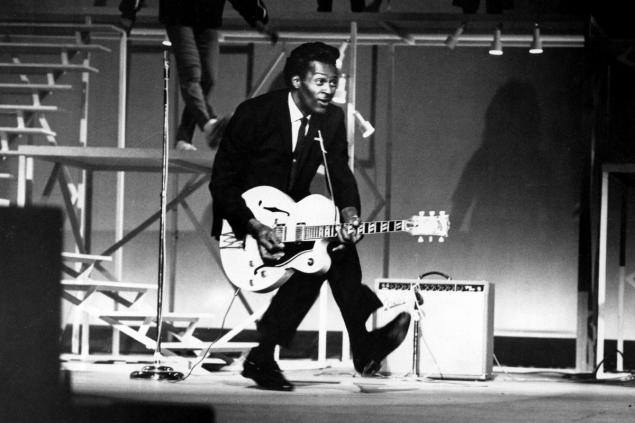