Polls show that Americans love their teachers and that their support is increasing over time. But educators are getting bullied a lot these days by students and state legislators. If President Donald Trump and Education Secretary Betsy DeVos want to improve their standing with teachers—and the parents who support them—they’ll take on these bullies in the classroom and capitals throughout the states.

Since the Columbine Massacre, there’s been a huge focus on students being bullied. But what we haven’t looked at as much is how the teachers have become targets. CNS News’ Terrence P. Jeffrey reported that 145,000 teachers were physically assaulted in a single school year, and more than a quarter-million were threatened as such.

Having worked with education majors, I’m not surprised. But what is shocking is how politicians are doing their own version of intimidation toward teachers.

A lot of these attacks come from state legislatures, perhaps looking to save a buck or spend it on something they like more than education. These politicians see teachers—demoralized by laws like “No Child Left Behind”—as an easy target to attack, and falsely believe that Americans don’t like their teachers.

It’s not just assaults on tenure. The Pennsylvania legislature had a bill pass a committee that took away protections for teacher sick and even bereavement days. Supporters of Senate Bill 229 had the audacity to call it a “fairness” bill.

In Texas, there’s Senate Bill 13, which would block teachers from being able to deduct from their payroll their membership in professional educator organizations. I’m all for allowing people to choose to make the deduction, rather than making it mandatory, but blocking teachers from making that choice to join a group that can provide badly needed resources is downright anti-teacher. “It’s okay for me to payroll deduct my gym membership. It’s okay to payroll deduct my United Way contribution…but all of a sudden the legislator doesn’t want me to be able to payroll deduct my professional organization,” an assistant principal told KTRE TV in Houston.

What’s next, cutting time for teachers to go to the bathroom? Actually, yes. A study by The Atlantic cited all of the stresses that are getting teachers to leave the profession, including salary concerns to teaching-to-the-test demands. Cutting bathroom time is just the latest debacle educators are facing in schools.

And that doesn’t even count the layoffs, which have led to increased student-to-teacher ratios. In fact, an MSN Money report has the number of dog walkers eclipsing the number of teachers in the coming years. Sure, demographics play a role, but so do the budget cutters and bean counters, no doubt.

It’s no secret that Trump and DeVos have few friends among teachers, but it doesn’t need to be that way. Trump and his education secretary can flip educators to their side the way that Midwestern states were changed from blue to red in the last election. Going to bat for teachers against these legislative bullies would be the best way.

Such rewards for Team Trump would far exceed those from the field of education, if such protections are made. The conservative Rasmussen Reports surveys show that “71 percent of American adults now view being a teacher as one of the most important jobs in our country today.” And that’s an increase over the 2015 numbers, which showed teachers with a 67 percent approval rating. Less than 20 percent of Americans fail to see the value of educators. This anti-teacher bias from legislators simply isn’t shared by the public; it’s fake news. That same report showed a number of Americans leery of becoming teachers themselves because being a teacher is like putting a bullseye on your back, from political bullies as well as school bullies.

Trump and DeVos can win teachers’ support by using the power of the Education Department to challenge these draconian attacks. The same evidence shows that they can also probably get a lot of backing from parents as well, by defending the teachers. Showing that teachers have a friend in Washington might encourage more students to sign up for that noble profession, as well. 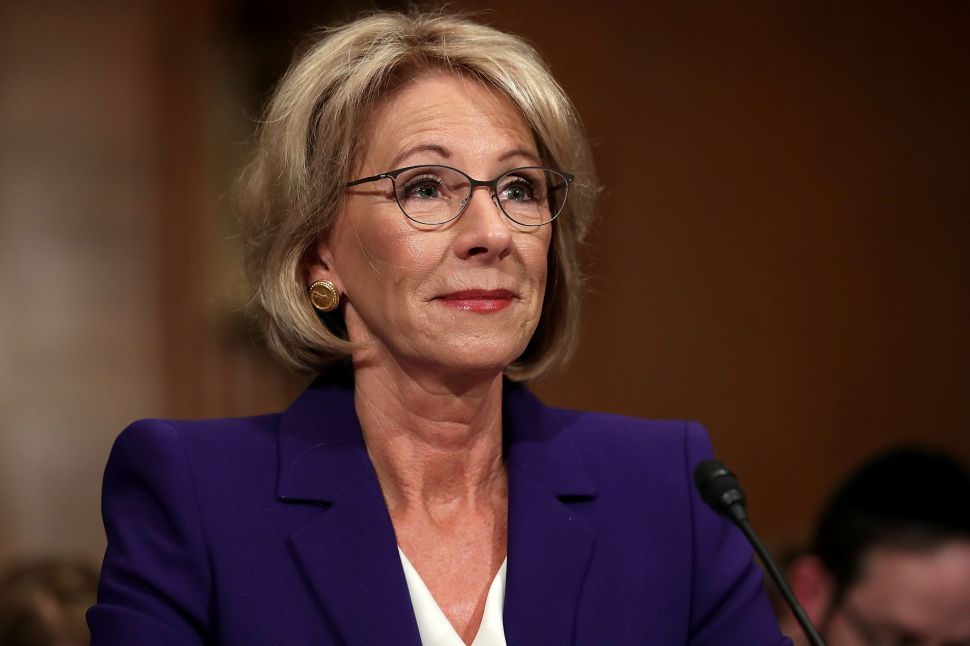