Some big news for fans of The 100 dropped last week while the show was on a brief mid-season hiatus: The CW is renewing the series for a fifth season! This right here is quite possibly the best scenario we could possibly have hoped for as the death wave of radiation barrels toward us. And now here comes the MAJOR SPOILER, so get ready. Not only does a fifth season give the show’s writers another year to continue churning out great science fiction television, but it also guarantees that at least some of our favorite characters are destined to survive the nuclear apocalypse. And there’s some more brilliant news in this week’s highlights: Roan and Clarke seem to finally be on the same page about facing the apocalypse as a team, Raven works out the kinks for flying and landing the space rocket and Octavia avoids becoming a cold blooded murderer. Things are looking pretty good for everyone indeed. I give you all a 37% chance of living to see Season 5!

The Ark may be lost, but Clarke and co. don’t have much time to mourn. At the start of Episode 6, they’re moving fast onto Plan B, which entails transporting the remaining rocket fuel (as Monty aptly points out it’s likely the last of the substance mankind has to spare) to Raven and Abby on Becca’s island so they can make their roundtrip (fingers crossed) journey to space. Clarke, Bellamy and Roan will have to navigate warring clans along the way (as news about the apocalypse spreads, domestic strife is only getting worse), and did anyone mention that hydrazine is an extremely unstable and explosive substance—they’ll need to avoid bumpy roads at all costs. “What could possibly go wrong?” Roan wonders. After the events of Episode 5, he’s put his suspicions of Skaicru behind him and seems willing to forgo Kingly formalities to help Clarke and Bellamy ensure the nightblood vaccine gets made. “We are all in this together now,” he tells Clarke, providing a much needed morale boost before they hit the road.

Of course, on the way to the island, the group encounters more than a few obstacles. The convoy is intercepted by a group of wounded Trikru Grounders, whose village was burned to the ground by Azgeda. But before Bellamy and Clarke can sweet talk their way past without incident, Roan’s security detail of Azgeda soldiers is discovered hiding in the back of their transport vehicle and the Trikru Grounders open fire. The group narrowly escapes, only to be stopped again by a river of ice flow blocking their road. And so, they do what you should never do in an emergency situation and split up; Roan and Bellamy head upstream to find a better place to cross, leaving Clarke alone with the wary and trigger-happy Azgeda soldiers to guard to hydrazine. “Nothing is more important than this cargo,” Roan tells his men, assuring that something will inevitably go wrong—which it does. Unlike Roan, the Azgeda soldiers haven’t put their beef with Skaicru behind them and they decide to abscond with the hydrazine, which in the right hands can be used to make bombs instead of lift off to space.

Cut to a high-powered car chase between the boys’ rover and the Azgeda-commandeered truck, which gives us a few moments of action and a hilariously stunt from Zach McGowan who makes an Ethan Hunt-style jump from one truck to the other to stab one of his own men in the chest. Thanks to an assist from Clarke’s well-trained elbow, our crew successfully wins the fight and, they think, saves the fuel—only not quite. Azgeda still nabbed one of the barrels, which will put Abby and Raven short of the “every drop” they needed for their flight.

Meanwhile, on the island, Raven’s headaches persist, but she refuses to let it sideline her efforts to land a perfect simulated flight with the rocket. Sadly, when we check in she’s failed 42 times and counting, and Murphy’s taunts as he fiddles with a toy truck and tries to assist her is doing little to help. Finally, his digs push her over the edge, and her resentment toward the boy who gave her a limp ends in a blitz of blows.

The only thing that can calm Raven, who has become lost in the overload of additional brainpower A.L.I.E.’s remaining code has gifted her and the near-constant pain from her leg, is a soothing mantra from Luna. Later, we see Murphy trying and fumbling to recount the mantra himself, which prompts a revealing conversation with the last remaining nightblood. “For years I reveled in death and violence,” she tells him. “I killed my own brother. Trust me, if I found peace, you can.” Murphy has grown by leaps and bounds from the boy we first met in Season 1, but while his narcissism has dimmed ever so slightly and he’s had some momentary blips of empathy, he still marches to his own beat as much as ever. “I think peace is overrated” he tells her. “It’s the fighters that survive.”

But her words manage to be enough to motivate him to make nice with Raven for the greater good. Still hysterical and obsessing in her quest to complete a perfect simulation, Murphy nudges her to try something new. “Perfect sucks,” he says. The perfect solution she’s been searching for isn’t attainable, but they don’t need perfect, they just need good enough, he says. With a vague phrase about swimming, Luna suggests a controlled crash into , and Voila! There’s the solution. But the breakthrough sends Raven’s brain into overload, and before anyone can celebrate she collapses into another seizure.

At Arkadia, the mood is tense. An angry mob nearly beats Ilian to death for blowing up the Ark, but Marcus intervenes and threatens to shoot his own people. Skaicru citizens declare Ilian’s offenses a “hate crime” and seize an opportunity to attack him while he’s unguarded in the medbay. “Mob rule will not dictate justice in the camp,” Marcus yells to the crowd, as he tries to stop Ilian’s execution for a second time. But he’s overruled and electrocuted into submission by his own men. The execution is on, and Octavia is determined to play the role of killer.

Overwhelmingly, the theme this week is chaos; when the end times come, fear and survivalism are almost impossible to squash with calls for optimistic togetherness. But another trope that show writers have been emphasizing is learning from the past. Octavia is clearly haunted by Lincoln’s death, and she has yet to find a better outlet for her pain beyond misdirected aggression. With a gun pointed at Ilian’s head, she’s ready to pull the trigger and make a final transition to her dark alter ego Skairipa. But Marcus, who has himself made a miraculous transition from a conservative and pragmatic general to a compassionate leader, paints a devastating parallel between Lincoln’s death and the one she’s about to bestow on Ilian. Finally, Octavia releases the trigger, the tears for Lincoln flow and she flees the camp. Ilian’s life is spared, and Jaha leaves us—yet again—with the Second Dawn’s tagline to mull over until next week.

—It’s a week of odd and cryptic dialogue. “Lexa would be proud of you,” Nylah tells Clarke, in an uncomfortable and intimate moment which reveals that 1) they’re hooking up again and 2) Clarke’s room was oddly not destroyed in the Ark explosion.

— Octavia and Bellamy share a cold moment in the medbay: “Octavia is dead. She died when you killed Lincoln,” O tells he brother. And when he tries to brush her off saying, “Don’t say that I’m your brother,” she reminds him that their blood connection is the only reason he’s still alive. Ouch.

— Jasper comes away with the best line of the week, a borrowed Dr. Seuss quote he’s promoting as the answer to avoiding pain: “If you never did you should, these things are fun and fun is good.” 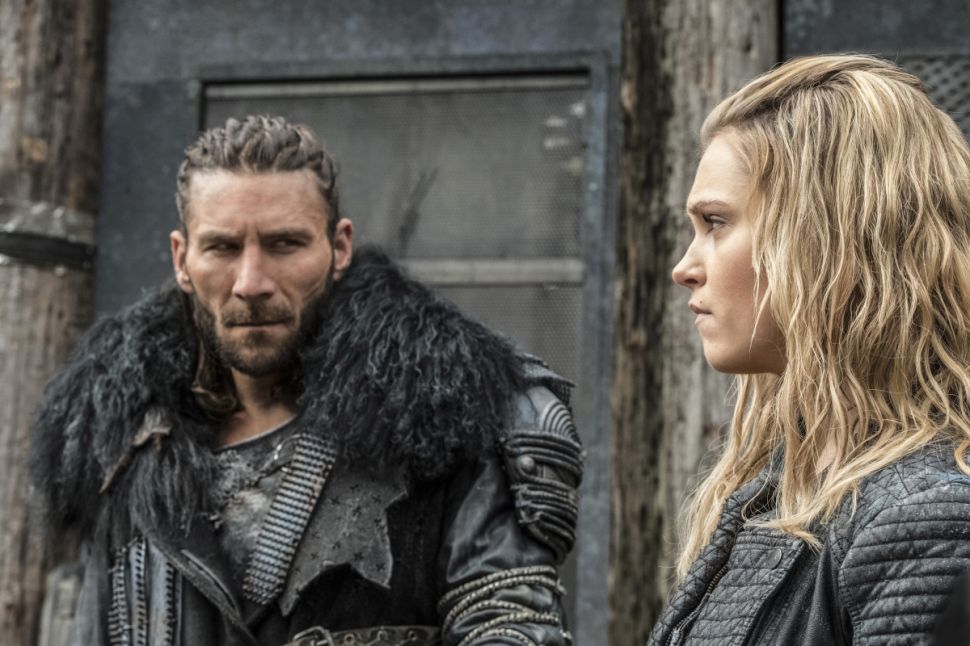