Given its premise, questions will undoubtedly abound as to whether E!’s new series The Arrangement is based on a certain Hollywood couple. Is this a thinly veiled story about Tom Cruise and Katie Holmes?

The series follows a beautiful, but struggling, young actress named Megan Morrison who, after a whirlwind romance, is presented with a marriage contract to one of tinsel town’s biggest stars, Kyle West. Complications arise as a secretive self‑help organization called “The Institute of the Higher Mind” plays a role in the relationship.

Executive Producer Jonathan Abrahams has an easy answer to the obvious comparison, but….is he to be believed?

“It really isn’t, if that answers your question,” said Abrahams when grilled about the idea at a Television Critics Association gathering.

He says that the idea was born of something else – what people are willing to do to get what they want. “I think what was appealing to me about this idea is if your first‑blush response is, ‘oh, she’s [doing this] for money or she’s doing it for fame,’ well, that’s the easy answer, but we’re going to look deeper and see that it’s much more complicated than that.”

About the fictitious ‘institute,’ Abrahams explained, “Well, it’s not a religion. And I don’t mean that coyly. This is not a show about faith. That’s not [an] underlying theme of do you believe or do you not believe? For me, it was really about [how] Hollywood is such an aspirational town and these self‑help organizations are about aspiring to a higher way of living; having more success in your profession and more success in relationships and having a more fulfilling life. And there’s a real promise to it, that ‘Come join our thing and do our program and spend X amount of dollars and you can change your life.’”

Abrahams went on to add, “I have a lot of friends in 12‑step programs. All of these things have something in common, and it’s this idea that the shackles of your past can be broken if you follow a structure about how to live your life, and you can shape a future that is not informed necessarily by the trauma or the bad experiences that you’ve had in the past.”

Josh Henderson, who plays Kyle West, said that his life as an actor informed his portrayal of the character in a unique way. “I don’t think I have anything to hide, but, you kind of check your privacy at the door when you become an actor, especially if you have some success. Playing a role like this, it’s a weird thing — an actor playing an actor and kind of having to live Kyle West’s life and not try to refer to my life.”

Discussing her role as Megan, Christine Evangelista remarked, “I thought a lot about the motives of this young starlet. Is it love? Is it a potential thriving career? It just happened so fast for her. I’m interested in the audience’s perception of [all of] it.”

Prior to entering into the arrangement with Kyle, the series establishes Megan as a strong woman, but yet she basically signs her life over to be controlled by a man. When asked about this facet of the show, Evangelista surmised, “Her biggest mentor and her agent say to her, ‘this isn’t the most uncommon thing. This happens in life, and this is a way for you to get to this point.’ [So she’s] like, ‘okay, well, I could use this in a way to advance myself, and I’m being told that this is acceptable on some level.’ But, yeah, I think it was difficult for such a strong woman to put herself in such a vulnerable position, and I was very interested to see how she navigates that, how she comes out of it, and if she sacrifices her character in some way because of it. That was very enticing for me.”

Henderson joked that he hadn’t been approached about entering such a union, saying, “I haven’t been offered any kind of sort of amazing 10‑million‑dollar contract to be someone’s boy toy.”

He goes on to speculate about if this type of pact actually occurs in real life. “I think we’ve all heard of the myths and rumors, and so that’s it’s kind of fun doing a show in this world in that we get to tell our own story and take our audience on a journey that maybe they want to know.”

Evangelista added, “Yeah, it’s certainly a controversial subject and one that I think we’ve all heard rumors about. I can’t imagine ever signing up for anything like this.”

Abrahams says these rumblings gave him more to pull from in creating this narrative. “I’ve heard of contract marriages going back to the days of the early sound movies, the early talkies, There’s a lot of fodder to inspire this kind of thing, for sure. Honestly, one of our writers on the show has been in the industry since the early ’70s and when you sit around in a room with people for eight hours a day trying to figure out the story that you’re going to tell the amount of true‑life stories and rumors and urban legends that get tossed around, we couldn’t fit it all into a season.”

Amid the speculation about these sorts of connections, Abrahams says about The Arrangement in particular, “I think as you faithfully watch the show this season, you’ll see very quickly that whatever rumors that you’ve heard, it quickly becomes about these characters. I’m not trying to grab headlines. For me, it was about, ‘how do I tell stories that are true to who these characters are?’ We weren’t working our way towards a couch‑jumping moment. It was really about how do you normalize this sort of ludicrous arrangement. The idea seems so crazy, but it happens. So how do freethinking, intelligent people make decisions like this, and then what are the ramifications? What are their lives like after they make those decisions? As a writer, that’s really what I’m thinking about and I think the audience will want the answers to those questions too.” 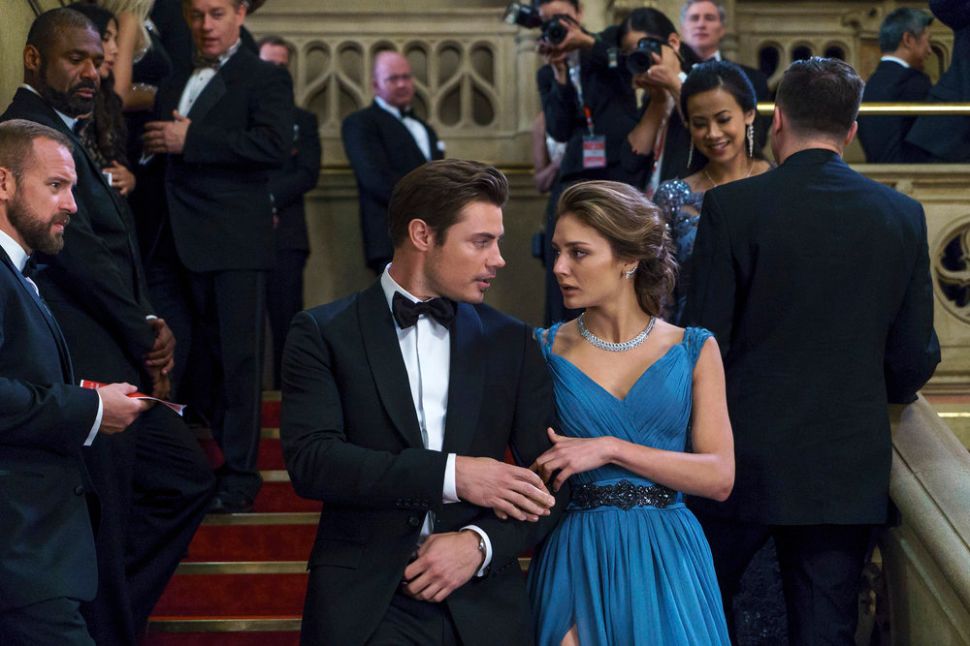