Nasty and aggressively nauseating, The Belko Experiment is another bloodbath from the “Midnight Madness” section of last year’s Toronto International Film Festival, made and marketed for the sole purpose of shock and schlock. It succeeds as both, but the result seems psychologically bewildering and pointless.

The scene is a high-rise corporation in Bogotá, Colombia, called Belko Enterprises, where 80 American white-collar employees show up for a normal workday and find, before they can even start their computers, that their Colombian co-workers have not arrived and their boss (Tony Goldwyn) spots a group of unfamiliar security guards entering an airplane hangar across the empty highway. Suddenly the metal window guards on the glass walls slam shut and the impenetrable steel security doors lock, trapping them in a claustrophobic hell dominated by a mystery voice on the PA system calmly instructing them to murder a specified number of fellow colleagues within 30 minutes or they will all die from tracking devices implanted near their brains. Naturally, they refuse, but while they try to figure out what’s going on, their cell phones die, the air conditioners shut down, and the electricity fails, plunging them into darkness. Then, one by one, their heads explode, spraying brains and blood all over the walls. The most levelheaded office manager (John Gallagher Jr.) saves his own life by bravely sawing his monitor out of his head with a box cutter, but panic ensues, everyone realizes this is no joke, and out come the bullets, butcher knives, assault weapons, hatchets, gasoline and grenades, as friends and strangers alike find themselves in a fight for survival that pits them all against each other in a slice and dice horror show of mass depravity. In the length of time it takes to get the message across that it’s all a government plot (isn’t it always?), I started wondering about the film’s budget for raspberry syrup and tomato sauce.

Nothing is ever explained, which makes The Belko Experiment something of a letdown, and there’s not much room for acting, but Australian director Greg McLean (Wolf Creek) and writer James Gunn (Guardians of the Galaxy) pile on the guts and gore with so much relish that there’s no risk of boredom. Unfortunately, it doesn’t add up to anything more than a clever peg for a horror movie, none of the characters develop into anything more than props, and the transitions from nice guys to bloodthirsty maniacs are unconvincing. The unsatisfying result of all the berserk paranoia is predictable.Talk about a take-no-prisoners plot. There’s almost nobody left alive at the end of this cringe-fest, but you’ll feel like a prisoner anyway. 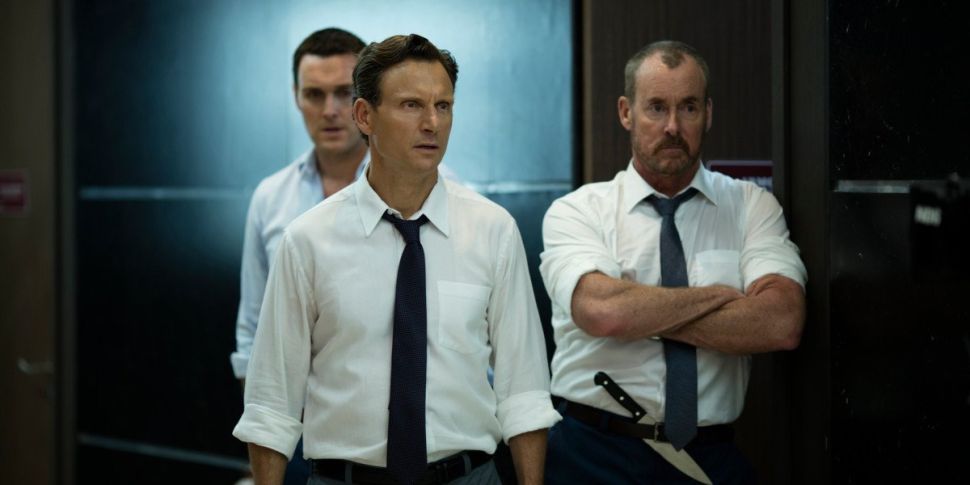