There is a point somewhere near the end of The Boss Baby where a rocket built by a crazy jerk who runs a corporation that manufactures puppies is about to blast out of the Las Vegas convention center. Where is it headed? I couldn’t tell you, and there’s an even money chance that the credited screenwriter isn’t entirely sure either. Wouldn’t a downtown Vegas rocket launch attract more attention? And how exactly does one make puppies without the active participation of adult dogs?

I know, I know: shut up already. Or as that aforementioned evil character—voiced, as evil cartoon characters tend to be, by Steve Buscemi, and named Francis Francis, seemingly in honor of Illy’s high-end espresso machine—says earlier in the film, “Do you know what happens to people who ask questions about my story?” Certainly, they get tossed out of Dreamworks Animation’s latest in their increasingly desperate attempts to stay on top of the animation zeitgeist. Or at least they should.

A meme dressed up as a movie, The Boss Baby doesn’t stand up to careful consideration, or really any at all. But if you are willing to just go along with its primary, if not singular, joke— Alec Baldwin does his corporate killer act, only this time he’s a wubbable wittle baby—you may be lucky enough not to notice.

In truth, there is some emotional resonance to the underlying conceit of the film, one that posits the idea that for an older child, the introduction of a new baby to an already established family is often less happy expansion than it is unfriendly corporate takeover. If the film had gone all in on this concept and been a full bore fever dream of will-my-parents-still-love-me anxiety, The Boss Baby might have become the rare movie, like Pixar’s Inside Out, that successfully navigates the complicated inner life of a child. The introduction of the titular character—he pops out of a taxicab in black suit and tie and struts up to the door to his own disco soundtrack, like Truman Capote arriving at Studio 54 in 1977—is one of the film’s better jokes; it also cleverly underscores the idea of the new baby as being in a world of desirability of which the previous child could only dream.

Unfortunately, The Boss Baby goes in the opposite direction, constructing a convoluted Habitrail of a plot in an attempt to explain why there’s a baby who sounds like a 50-something Long Islander, carries a briefcase, and tosses wads of ever-replenishing money at any problem he encounters. It turns out babies come from some fluffy white conveyer belt in the sky (imagine heaven for lost luggage) where a pinball flipper sorts them by gender and disposition. This baby was plucked for management and sent to thwart the growing popularity of puppies. (I’m guessing it sounded funnier when pitched in the old Dreamworks conference room). He infiltrates a family where the parents (voiced as if they needed to feed the parking meter outside of the recording studio by Lisa Kudrow and Jimmy Kimmel) both work in the marketing department of the puppy company. You see kids, it’s all about marketing.

The main egg in all this Easter basket grass is Baldwin’s vocal performance. It’s funny—every bit as funny as when he did it in person in the service of much worthier material for all those years on 30 Rock. But by the time the baby and his would-be older brother Evel Knievel a moving train in one of the sugared-up chase sequences that are the hallmarks of these kinds of movies, one finds oneself wishing The Boss Baby had simply made good on the bus stop poster promise of being Glengarry Glen Ross for the lunchbox set. Frankly, anyone over 10 would do better streaming Baldwin do his thing on Tiny Fey’s show, and they would likely come away with much healthier views on procreation. (When he is whispered the truth about where babies come from, the boss baby proclaims, “Disgusting,” forever confirming his Republican bonafides.)

Despite a rather dull palette, there is a snappy look to The Boss Baby thanks to its 50’s industrial film sheen. It becomes even more visually involving in its stylized fantasy sequences. There is also a recurring visual motif of babies’ bottoms that is returned to four too many times. I guess baby butts are funny or cute or something, but only in the right context and in far more limited doses than this. All and all, the subject is better not thought too much about. Kind of like The Boss Baby. 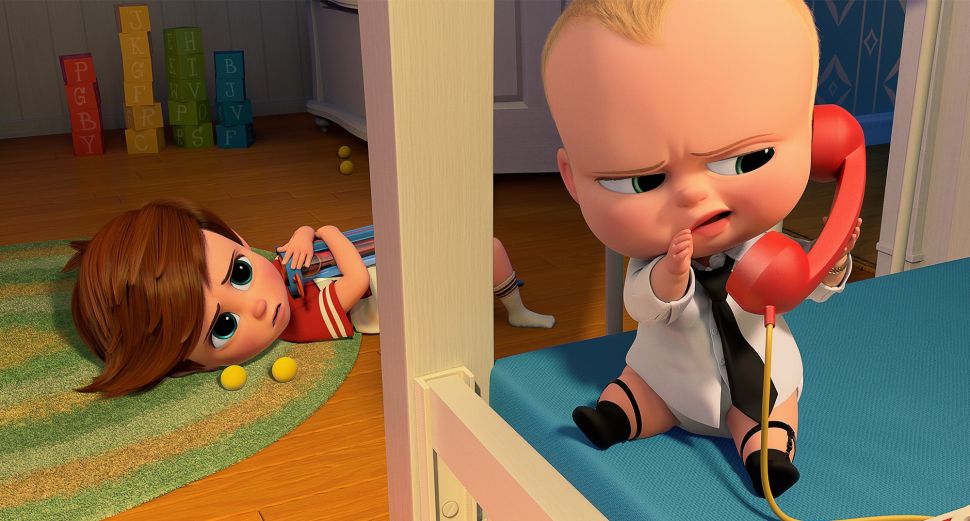