Comic books are fun. TV is fun, as are movies. But occasionally, when the two meet, the results turn out to be something…very, very not fun. Sometimes they’re just plain bad, and we speak of them in hushed tones. Sometimes they’re incredible, but so dark describing them as “fun” gets you put on a list. And sometimes they’re directed by Zach Snyder, who was not hugged enough in his formative years.

But sometimes, man, sometimes the big and/or small screen meets the inked-and-lettered page the perfect explosion of the ridiculous, the nonsensical and the joyous. The Flash Season 3’s Gorilla Grodd storyline, which came to a battle helmet-wearing head in last night’s “Attack on Central City,” is that mixture in its purest form. It was somehow a perfect example of both High Art and Low Art. It was Exact Middle Art. As I described to you the events that took place in “Attack on Central City,” events that include but are not limited to an Army General having his mind invaded by a psychic ape, know that I am typing with just my right hand, because my left is alternating between joyously pumping into the air and ordering every issue of The Flash #106 on Earth for a sum total of $5 million. Nothing has ever been more worth it.

But first, a lightning-round catchup:

Last week, The Flash, Caitlyn Snow, Cisco Ramon, and Julian Albert traveled to Earth-2 to rescue Harrison Wells from Gorilla City. That’s…a lot to unpack. Just know that in the DC canon, there’s infinite universe. There’s one where Hillary Clinton is the President. There’s one where Dwayne “The Rock” Johnson is the President. There’s even one where, against all known logic and decency, Donald Trump is the President. And there’s one, called Earth-2, where deep in the African jungle lies Gorilla City, which is 100 percent populated and maintained by gorillas intelligent enough to run a city but not intelligent enough to name it something more creative than Gorilla City. Either way, that’s where Grodd brought Harrison Wells. Grodd is a telepathic gorilla. We’ve been over this.

But, surprise, when Flash and Co. arrive Grodd is all like, “Oh my God, Flash, I actually need your help, oh my God, Flash” because Gorilla City is being run by a tyrant-ape named Solovar. Grodd wants The Flash to fight Solovar in a King Kong-shaped coliseum, and that is exactly 100 percent what happens.

It is amazing. The CGI is low-key terrible, The Flash wins, like, hella easily, but everything I’ve ever loved about comic book storytelling can be summed up by a man with super-speed punching a shield-wielding gorilla in the face.

This scene, I repeat, is amazing. I hope the next Oscars ends with someone yelling “There’s been a mistake. Attack on Gorilla City you won Best Picture” and they cut to the crowd like 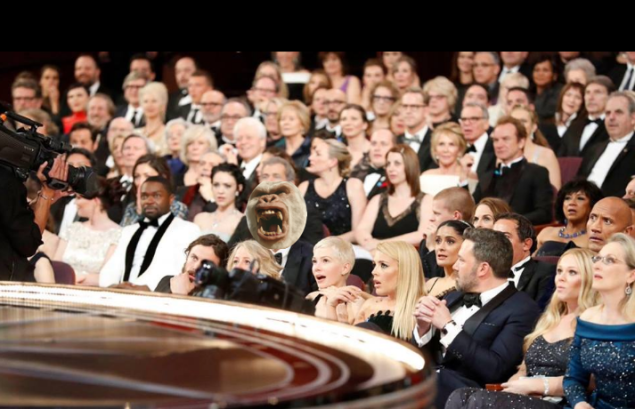 After the fight, Grodd is all “Flash, you idiot, I wanted you to beat Solovar so I could be Gorilla King and invade your universe and, like, replace all skyscrapers with tree houses, idiot. Cisco, open up a dang portal.”

Cisco and Flash are just like “no,” and long story short everyone nopes the fuck back to Earth-1 safely. However, it’s revealed that Grodd has Gypsy, who can also travel universe-to-universe, so Grodd’s gorilla army is headed to Central City after all. Which, you know, sounds like it would’ve made a better Plan A but I’m not the genius psychic gorilla here.

So, with that, take me down to Central City where The Flash is my scene because Arrow got shitty.

Oh my God, I didn’t even mean to do that.

No, I totally did.

There are some things you need to accept before we move forward. You must accept that Central City, a large metropolis, is surrounded by miles and miles of dense forest that seem to begin right at its border. You must accept that this forest is so dense that Grodd marched an entire army of battle-ready gorillas through it without anyone noticing. You must accept that for the entirety of this episode, when Barry and friends are in a laboratory strategizing over ways to defeat Grodd, this very same army of battle-ready gorillas is still in that forest, I guess just standing there, and still, no one notices. Got it? Great.

Let’s talk about that time a gorilla tried to nuke a city.

So Grodd’s master plan, his Plan A, if you will, is to kidnap a man named General McNally, take possession of his mind (Grodd can do that), and launch a series of missiles from Fort Reynolds. The first part works like gangbusters, honestly.

And the missiles do become prime for launch. But, in one of the most blatant examples of “I don’t know what to do but holy shit that deadline is tomorrow” screenwriting in recent memory, Barry stops the attack by rapidly punching buttons in the hopes he nails the abort code. He button mashes. The Flash stops an all-out city-destroying blitz the same way you beat your friends in Marvel vs. Capcom.

Grodd–who, again, should always just use his Plan B as the actual plan–is like “those missiles didn’t work but this horde of gorillas miiiiiiiiiight.” Grodd’s gorilla army charges. Flash, Jesse Quick and Kid Flash take to the streets to stop them.

First, my favorite characters in this entire saga, possibly in all three seasons of The Flash, are these drivers in the background casually making a right turn at a light while gladiator gorillas march down the street. 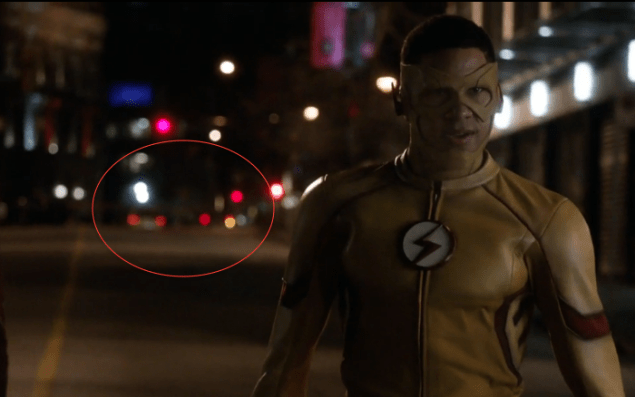 Block off the street, Barry!

Which, actually, brings me to Thing #2: the idea and image of three lone superheroes v. army of gorillas is cool. No capital letter TV Criticism, no upturned nose snobbery. It’s just cool. Look at it. It’s cool.

But this, this particular situation, this 100 percent calls for someone to call, like, the actual army. Not the one with super speed, the ones with guns. There is so much time between Grodd arriving and Grodd invading where someone should have picked up a phone and ordered roughly 100 tanks. Hell, you have Oliver Queen on speed dial. He could…shoot some arrows and stuff.  You know Supergirl! Put the sexual tension on hold for five seconds and call Supergirl!

Either way, Barry’s mistakes become immediately clear while Grodd proceeds to throw him through a taxi cab.

Here’s the thing: a throughline through “Attack on Central City” is Barry going through the ol’ Batman dilemma. If Grodd is just going to keep coming back, why keep him alive? The thought eats away at Barry. He even destroys a punching bag, which Captain America taught me is the ultimate sign of superhero angst. Iris tells Barry to stay true to himself. Harrison Wells tells Barry the idea of killing Grodd is “the most idiotic thing I’ve ever heard you say.” Me, personally…kill the gorilla. You got a ten-ton psychic monkey that wants you and your loved ones dead, you kill the gorilla. Harambe didn’t have to attack a city with an army, is all I’m saying.

But still, this is The Flash. Barry might ruin his friends’ lives by constantly altering time and space, but he’s never going to kill anyone. Luckily, while Grodd made his move, Cisco and Gypsy are wading through an uninteresting romantic subplot while also looking for a solution. They find one, on Earth-2.

Solovar! It’s Solovar. Solovar wants a CGI gorilla fight. We want a CGI gorilla fight We get a CGI gorilla fight, and because this episode wasted 3/4 of its runtime on teenage love stories the CGI gorilla fight lasts roughly 36 seconds. This is equal parts A) disappointing and B) hilarious. Weeks of hype and build-up and Solovar’s just like “fuck you, Grodd” and punches him off a building. All the other gorillas are like, “well then,” and Solovar takes them back to Gorilla City to live in peace / punch each other to death in gladiator fights.

They leave Grodd behind, where he will star in Mel Gibson’s Suicide Squad 2 if that witch I paid can actually make dreams come true.

So where do we go from here? Barry proposes to Iris, so that for years to come they can tell people the catalyst for their holy matrimony was a gorilla invasion. Jesse stays behind on Earth-2 to canoodle with Wally, because Jesse has terrible priorities. 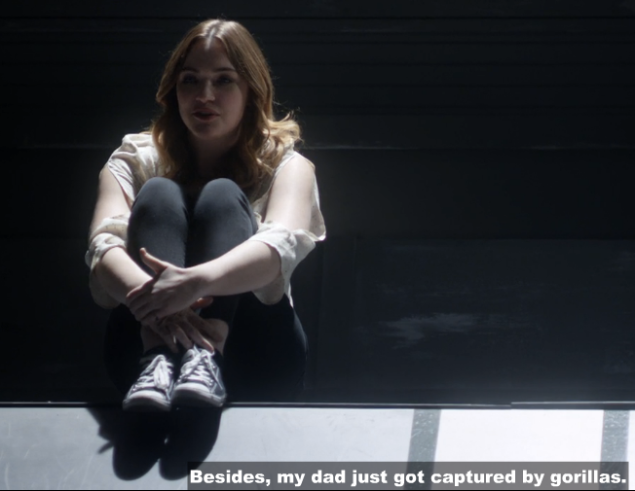 And, before the credits roll, Savitar shows back up, which means The Flash is…immediately uninteresting again.

But! But, the “Gorilla City” was some of the most fun TV in a long time. It’s easy—especially if you, like me, follow a lot of *critics* on social media—to get trapped in a Peak TV bubble where only Good TV is good, and the rest is not worth your time. This two-part tale of a psychic gorilla gone rogue isn’t going to win any Emmys—not even the CGI is that good—but it was a blast to experience. I’ll probably watch Barry Allen fight a gorilla-king in hand-to-hand combat again before I watch The Wire for the first time. There’s undeniable quality, there’s obvious artistic genius…and then, somewhere in another universe, there’s Gorilla City. 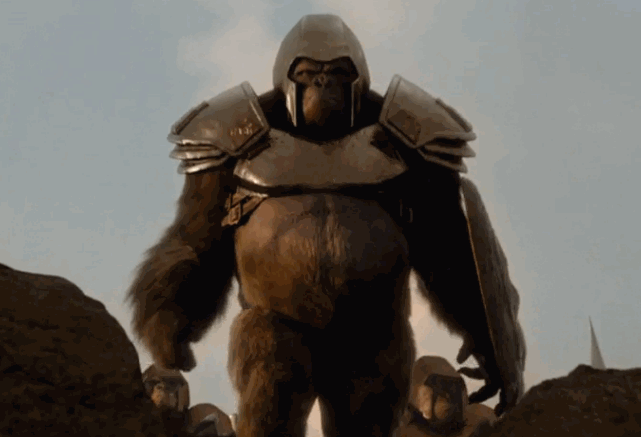