It’s an odd, almost old-fashioned thing to be a devoted comic book reader these days. Not that the idea of comic books themselves are old-fashioned–on the contrary, good luck finding a Box Office leader that isn’t comic book related. But in a time where binge-watching is the preferred method of consuming TV and studios consider releasing films directly into our homes, a comic book is one of the few mediums that still tells its story serially over an extended period of time, one chapter, once or twice a month. As such, to read a single issue of a comic book is to rush headlong into the final page, the final panel, which entices you to keep reading…in one month, or wait until the entire story is collected in the trades. Which is why for decades the backbone of comic books’ grand presence in the larger pop-culture conversation has been one idea: The Big Event. DC and Marvel love their Big Events. DC is smack in the middle of Rebirth, which is a retcon of their last Big Event, The New 52. Marvel, on the other hand, usually just pits one team of their heroes against another; 2012 saw “Avengers vs. X-Men,” “Secret Wars” blew everything to pieces in 2015, but just a year later the X-Men were back at it again, this time doing battle with the Inhumans.

Sure, there are series in which each and every issue is a stunner–all 42 installments of Image’s Saga, from writer Brian K. Vaughn and artist Fiona Staples, could be on an art school curriculum. But, for the most part, it’s these Events that we remember, that keep us coming back. It’s rare someone can tell you which issue of Superman before 2000 had the best art, but they’ll wax poetic on “The Death and Return of Superman” for hours; few will bother untangling the mess that was X-Men continuity in the 1990s, but “The Dark Phoenix Saga” has changed lives. Comic book Events are big, loud, memorable and, in the long run, often have little effect on whatever universe it just blew up.

Basically, this is the long road to saying that nothing outside of comic books has understood, utilized and mastered the importance of the Big Event better than CW’s The Flash.

The Flash‘s third season has told the dual story of Barry Allen repeatedly ruining his friends lives’ with time travel and the arrival of Savitar, the God of Speed. And, so far, this dual story has been doubly uninteresting. The time-travelling is a tangled mess until it isn’t, and I couldn’t tell you a damn thing about Savitar, a faceless bundle of CGI, besides the fact that for a short time he possessed the body of Draco Malfoy. But, despite it all, The Flash is by far one of the most entertaining things on modern TV, because by Grodd can it pull off an Event.

The series’ relationship with breaking away from the main storyline started small but strong–a King Shark here, a telepathic gorilla there–but has grown steadily, to the point where the announcement of a CW-verse Event is infinitely more exciting than the announcement of another DCU film. I want Wonder Woman to be great, but I just want to see a 10-foot-tall shark monster just a little more.

Earlier this month, The Flash debuted the two-part “Attack on Gorilla City” storyline, which saw psychic-gorilla Grodd orchestrating an attack by a gorilla army on Central City. It was, without exaggeration, some of the most fun you could have watching TV in years. Again, I can take or leave Savitar, and care near-negative amounts which Harrison Wells is which, but I still think about this GIF on a daily basis:

Last night, The Flash one-upped itself with “Duet,” which, in classic Event fashion, doubled as a cross-over. Here, the cast of DC series/actual ball of light Supergirl joined Barry and Co. for a Whedon-esque musical episode. Here’s the key thing to “Duet,” which saw a trickster-villain named Music Meister (Glee‘s Darren Criss) trapping Barry and Kara inside a musical of their own creation: it was as charming as it was nonsensical, and so entertaining you’d hardly notice it made next to no narrative impact on The Flash overall. Seriously, if you want a visual metaphor for the substance of “Duet,” it would be the Music Meister literally twirling away into nothingness:

Yes, it ultimately got Barry and Iris West over their break-up from a whopping two episodes ago, and a lesson about the power of love was learned by all. But “Duet” (directed by Dermott Downs and written by Aaron and Todd Helbing) understood what was actually important. The key components of a comic book Event are small, character moments within the larger story. Because what brings us back to comic books–and comic book TV series–are the characters.

“Duet” is a wonky patchwork quilt of small moments. Carlos Valdes as a bow-tied waiter with showbiz dreams while Jeremy Jordan “tickled the keys” on-stage. A returning Collin Donnell as a switch-blade wielding club owner, opposite Jesse L. Martin‘s return to his Rent roots as one-half of a married mafioso couple with Victor Garber (Barry’s fine with that. “I love musicals, so..”). Who knew every cast member of The Flash could outsing Ryan Gosling? Who knew I would one day download a Melissa Benoist version of “Moon River?” Who knew Grant Gustin did such an on-point impression of a bloviating Superman?  It all amounts to a charmer of a mix between West Side Story and “Once More with Feeling,” a tap-dancing break from The Flash‘s routine that only disappointed because A) It did not feature Stephen Amell as a shirtless trombone player, and B) it had to end.

And, for The Flash and Supergirl to go on, it did have to end. But it was assured with a moment of wistfulness that The Flash had to return to reality, in more ways than one, a reality less engaging than a musical inside your head. Barry may not have this fabric-of-the-universe thing down, but at least one member of the Allen family understands how to tell a story; “Everything is better in song.” 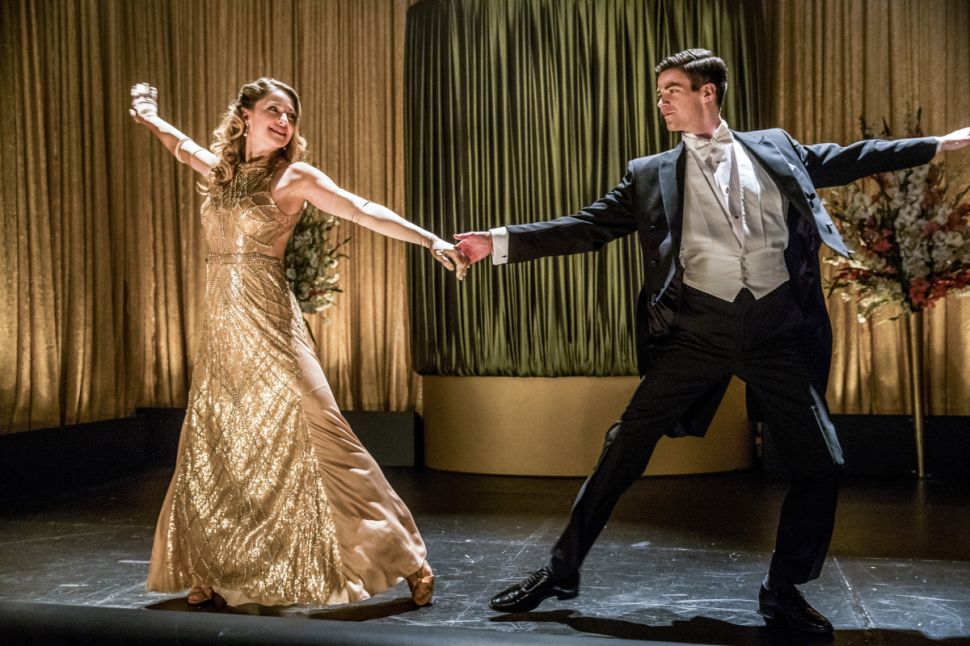