No, they are not blasting for a new subway under the Belasco Theater. The noise you hear is the sound of a mortified Tennessee Williams, turning over in his grave over what pretentious hack director Sam Gold has done to his great memory play, The Glass Menagerie. Another arrogant experimental bore from a man who believes no play deserves to be anointed as a classic unless it can be dismantled and shredded for kindling in a production that is different for the sake of being different. He does it every time some he can find a group of fools who raise the money to give him carte blanche. I’m still reeling from his production of Look Back in Anger where, to illustrate his idea of how an “Angry Young Man” lives in John Osborne’s London, he forced the actors to slip and crawl around on a set littered with discarded garbage and rotting food. This time somebody named Andrew Lieberman is credited with the set, with lighting by Adam Silverman, which is a head-scratcher, since there is no set at all, just an empty stage containing one metal table and four ugly, uncomfortable orange chairs against the naked brick wall at the rear of the proscenium, and most of the play takes place in such darkness that you can’t see what’s going on half the time (a blessing in disguise). Stripped of its poetry, the rich lyricism of America’s greatest playwright is reduced to the rubble of words that sound alarmingly banal. In the verse to “Fly Me to the Moon,” songwriter Bart Howard wrote “Poets often use many words to say a simple thing.” For this feckless Broadway revival, one word says it all: abominable!

The Glass Menagerie may be described by the author as a memory play, no realism necessary, but I hardly think he intended it to be so garish and moribund. With inconsistent and careless direction, the actors are rudderless. Amanda Wingfield, an iron butterfly with singed wings based on his mother Edwina, has been played with varying degrees of success by a who’s who of theatrical first ladies, beginning with the legendary Laurette Taylor and including everyone from Shirley Booth to Jessica Tandy, Joanne Woodward and Maureen Stapleton. Sally Field, who tackles it now, is a good actress with a small range. She struggles valiantly with a cornucopia of awkward accents that rarely sound like a Southern belle gone to seed, and she still looks much too young in modern clothes that show off her legs and make her look too young—and one hideous raspberry-colored tulle prom gown that makes her look like the Flying Nun is still flying. She lacks both the carriage and the authority to make the domineering mother a powerful centerpiece. And this is the first time in history Amanda has been directed to make her first entrance through the audience with the full house lights on, then drag a heavy wheelchair up the stairs and lift her daughter into it. If Sally Field doesn’t have the services of a chiropractor in her contract, she should sue.

As her son Tom (an unmistakable replica of Tennessee himself, whose real name was Tom), Joe Mantello, best known as a polished and profound stage director, finds humor where I never detected any in previous productions. In lonely desperation to escape the claustrophobia of his St. Louis apartment, he is both moving and funny—the only true revelation onstage and the closest thing to revisionist casting the rest of the production strives for. He’s the one member of the cast who actually achieves what the director intended, making something fresh and new out of a familiar character. Then there is the harrowing presence of newcomer Madison Ferris, who plays Tom’s sister Laura as a pathetic and deformed social reject. Based on Tennessee’s real sister Rose, Laura is written as a shy, fragile girl with no self-reliance and no social skills. Ferris makes her a pitiful, grotesque invalid. This is no fault of her own. Showing a sadistic streak that is far from flattering, Sam Gold must have considered it larky and bold to cast an actress who has actual muscular dystrophy victim in the role, but it’s a gimmick that backfires. Since Laura can’t even walk, it no longer makes sense for Amanda to send her out on errands or think she’s spending her hours in a typing pool learning to be a secretary. Ferris is attractive and capable, but when she moves, she raises herself with her stomach, spine and two hands and the other actors have to fit her into a wheelchair. Forgive me if it’s not a politically correct thing to say, but I found her struggle alarmingly distracting enough to throw the whole play off balance. For an actress who knows too well this might be her last chance to be cast in a major role on Broadway, the experience is probably a dream. For the audience, it’s something of a nightmare.

With no fire escape where Tom can unburden his personal dramas, smoke endless cigarettes, evade his mother’s incessant nagging before passing his nights at the movies, there’s no visual avenue of emancipation to which a viewer can relate. With no music drifting up from the dance hall across the alley, there’s no sense of the dreamy existence to which he aspires. In fact there is no sense of time, place or location anywhere that gives the essence of Tennessee Williams’ lovely, tender yearnings to leave St. Louis and experience life beyond the fire escape. It’s no wonder that the Gentleman Caller scene is the production’s most naturalistic interlude (well played with dash, wit and humane benevolence by Finn Wittrock), but why is it staged entirely in the dark? Tom’s final line (“Blow out your candles, Laura”) no longer has any relevance because Laura can’t even light them, much less blow them out.

What’s missing here is a clarity of vision and control of tone that would give this dark, depressing revisionist rehauling a reason to be different. Eventually the surfeit of pretentious clutter is overpowered by the writing of a master craftsman, and you realize the music in the language of Tennessee Williams excels on its own. The Glass Menageries survives a doomed production that is otherwise only one step removed from a stale and stodgy reading. For the most part, it comes off as a hopelessly half-baked endeavor to change and cheapen a seminal classic for the sole purpose of being different. It doesn’t work. Tennessee Williams is different enough already. 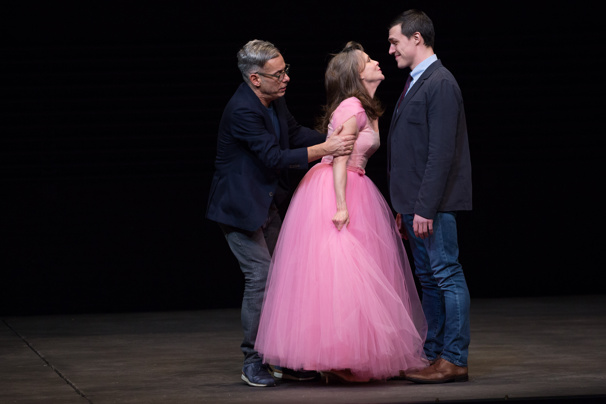