Annnnnd we’re back, for another episode of our hit show, “Can Someone Please Tell These Lawyers To Respect The Law?” I’m your host, Alexis Rhiannon. Let’s get started.

We left things last week with Morello telling Lucca about the $800,000 bribe, which has big implications for the firm, but more importantly, for Maia, because it means her father is working with the other side, and against her. So Lucca takes that info straight to the person who can be trusted with it the least — Maia. Luckily, she agrees that the info should be taken to the partners, instead of going rogue and doing something about it herself, but still, not a very lawyer-y move, putting your own safety and your firm’s on the line like that, just to be empathetic to a young lawyer you barely know, who is unwound just by trying to speak without her accent.

Meanwhile, we quickly jaunt over to the proceedings giving this episode its name — the grand jury. Kristeva and his Assistant United States Attorney Spencer Zschau (Aaron Tveit) promise a case involving bribery and tax evasion, but they soon have to reevaluate. When serving Elsbeth Tascioni her subpoena, they confiscate her Ava device and realize they’ve been misled by playing back stored recordings, one of which is Elsbeth coming up with the Travis Leopold plan. They bring in Henry Rindell to accuse him of working for the other side and revoke his bail, but he pleads for the opportunity to talk to Maia first, and they let him, because what even is the law anyway? He shows up at her apartment without warning — not that she would’ve been prudent enough to bring her attorney regardless — and calls her out on not trusting him, telling her the situation isn’t what she thinks. According to Rindell, he was trying to protect Maia by wearing a wire, not himself, because her forged signatures are on some pretty incriminating documents. He says the Feds are actually after the firm, and he threw them to the wolves to shield Maia from harm. Case in point, the Reddick, Boseman, and Kolstad partners are getting subpoenaed all over the city.

When they gather to discuss this, the RBK partners quickly agree that Kristeva isn’t trying to win, but just to destroy the firm, either through bankruptcy or the stigma of an indictment, because grand juries always indict. Their only hope hinges on the fact that Lucca has inside information that Wilbur Dincon is worried about the investigation seeming racist, information that she got through Morello but refuses to disclose the source of, because she’s a journalist and not a lawyer, apparently. So the only way to close down the grand jury is to make Dincon so uncomfortable about the optics that he does it himself, by turning every answer they give on the stand toward race. That’s exactly what they do, and it makes Dincon exactly as uncomfortable as they thought it might. On the ropes, he instructs Kristeva to turn the tide, and now the most visible white members of the firm get served as well: Diane Lockhart, Marissa Gold, and Maia.

That’s just proof that Dincon is paying attention, though, and that their plan is working, so Elsbeth exploits that, serving Kristeva with a subpoena himself, this one in civil court, for tortious interference in contract negotiations, which basically means he’s affecting the firm’s bottom line by scaring clients away with this looming indictment, and he’s doing it on purpose.

In response to this latest move, Dincon tries to assign Morello to defend his colleague, Kristeva, which he tries to turn down because he doesn’t like the guy (nope), isn’t a defense lawyer (fair), and is having sex with someone on the opposite side (very fair). And just like anyone in the legal profession when their employee discloses a personal relationship and/or conflict of interest, Dincon tells Morello to break it off. We’ve never seen a Human Resources department on this show, or The Good Wife, but you gotta believe it was just constantly swamped, with the way these people behave.

Back in court, Morello is getting tripped up by the fact that he’s, you know, usually a prosecutor, and Lucca decides to exploit this by going second chair on the case, another very clear conflict of interest. She and Morello are arguing with each other, basically having a little foreplay in front of the judge, the Honorable Kyle Gallo (Kevin Pollak), but a little bit of law sneaks in as well, and we find out that Elsbeth has brought this case to give them the ability to dig into what’s being said at the grand jury, since those are closed proceedings.

Speaking of the grand jury, Marissa is killing it on the stand. She has the entire jury on her side as she continues the same strategy of making literally every question about race. She also spots Andrew Hart outside the courtroom, which likely means he testified at the grand jury, and now the RBK lawyers want to know why. So…they ask at the civil proceedings. Sure, that can be how that works. Through digging, they discover that he met with a client of theirs, Mr. Anthony Spiegel (Clifton Davis), who confirms to Barbara Kolstad that Hart was trying to poach him. On the stand, Spiegel testifies that Hart tried to use the fact of the grand jury as incentive to win Spiegel away from RBK…two weeks before the jury was even impaneled, meaning the information could only have come from Kristeva himself.

Speaking of Kristeva, he and his team haven’t gotten any less generous with the subpoenas, and finally hit on someone who might actually have some damning testimony for the firm: the litigation financiers. The prosecutors home in on the fact that in the Toby Kendall case, just before the settlement was awarded, they increased their stake in the proceedings. This points to them having had privileged information from Diane Lockhart about the newly-discovered evidence and their willingness to make a deal, which she FOR SURE should never have been discussing even in veiled ways with her new firm, and she knows that. Even worse, Marissa and the investigator Jay have cracked the code on the nine-digit numbers associated with the clients on the Schtup List, and they correspond to federal tax ID numbers, with several drawing a connection to Diane’s old firm, and work that she did for the Rindell Fund. She tries to resign, because she thinks she crossed the line (yup), and that this is a disbarrable offense (yes), but Boseman won’t let her. K. They decide to use “mere puffery” to defend themselves in court, which is the “legally acceptable practice of promoting through exaggeration.” It basically involves Diane and Boseman giving different stories in their testimony, and when they’re called out on it, saying that the other wasn’t lying in his or her testimony, he or she was merely puffing. Okay sure. At least it’s a legal term, but I’m not happy about it.

Maia overhears the conversation between Boseman and Diane plotting out their defense, and the next time her father makes an unscheduled, highly illegal, and undocumented visit to her apartment, she takes him to task for betraying Diane, a family friend. Especially because he got Maia to help him do it, by printing out the Schtup List. (And that, my friends, is why you’re not supposed to break into people’s computers and print the documents you printed out from them to your incarcerated father in prison without knowing what you’re handing over. Just a handy lesson for next time.) Rindell says he did what he did to keep his family out of jail and reduce his own sentence, but Maia refuses to get on board, telling him that if he goes through with his testimony against Diane, it won’t matter if he’s in jail or out, because he’ll never get to meet any potential grandchildren he might have. Damn, ice cold.

But it works. On the stand the next day, the RBK lawyers call Henry Rindell to the stand, and ask him just one question: “What did Kristeva offer you in exchange for your grand jury testimony?” And bless him, Rindell answers honestly, revealing that he was offered ten years in prison instead of life without parole.

As soon as the news gets out, Dincon’s phone is going nuts from people furious at him for going light on Rindell, who they believe stole their money. Not only is the grand jury closed down, but Kristeva is fired, and he comes by Elsbeth Tascioni’s office just to vaguely threaten her that this isn’t over. Y’know, as you do when you’re a lawyer who’s just lost your job.

Diane thanks Maia for protecting her, and Morello shows up at Lucca’s door, so it looks like all the necessary friendships and relationships are still on track going into next week, presumably to be destroyed at some point down the line by some sort of lawyerly misconduct. Can’t wait. 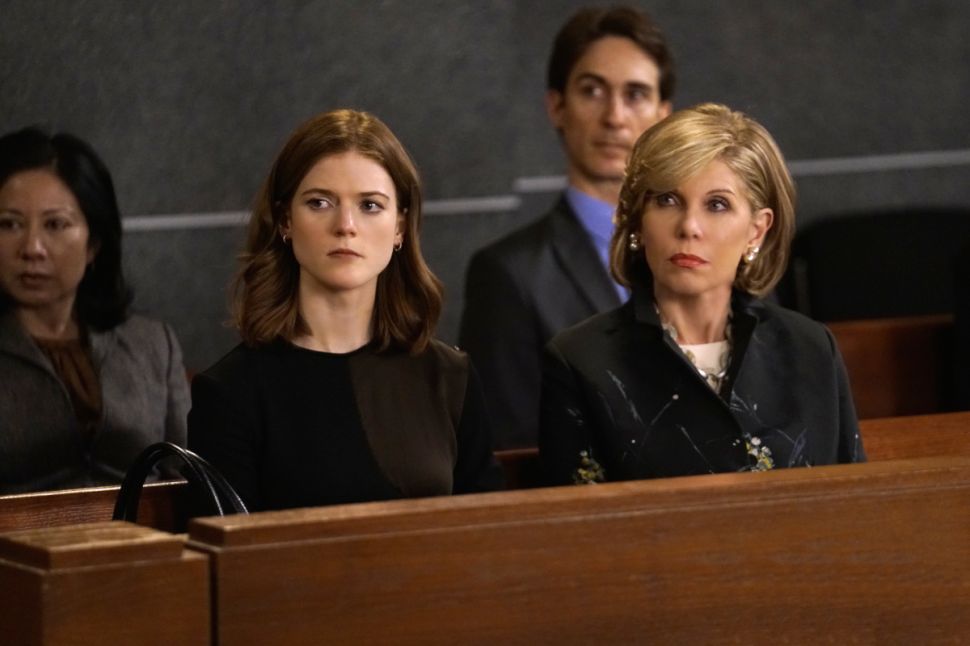