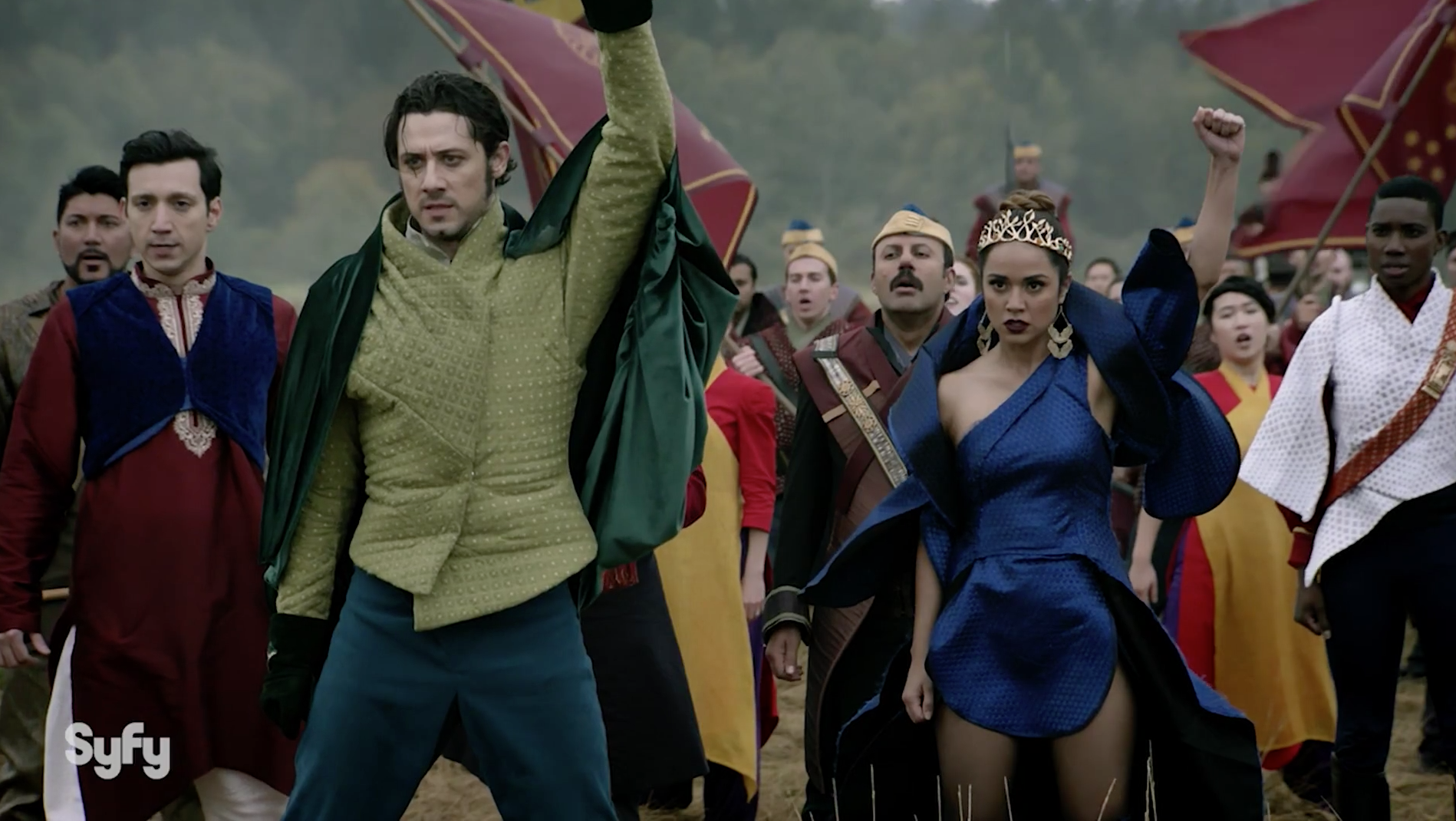 Eliot and Margot prepare to challenge the Lorians to a duel in Season 2, Episode 9: “Lesser Evils.” Screenshot via Syfy

With the internet as my witness, I hereby officially petition Hollywood for more musical episodes. There’s just simply no going wrong when actors sing on TV. It was all the rage in the’90s. Xena did it. Buffy did it. Fast forward to today and American Horror Story has done it—more than once. In fact, TV musicals seem be experiencing a renaissance at the moment: see recent singing episodes of The Flash, Supergirl, Once Upon a Time and It’s Always Sunny in Philadelphia. Now, this week the cast of Syfy’s The Magicians takes a stab at the illustrious genre

And while much to my dismay Season 2’s Epsiode 9 “Lesser Evils” isn’t all singing and dancing—the Fillorians do have their hands full preparing to face off in battle with their frenemies the Lorians—Eliot (Hale Appleman), Margot (Summer Bishil) and Fen (Brittany Curran) literally stop the show with a rousing version of Schönberg’s classic Les Miserables tune, “One Day More.” Fun fact: Appleman played Javert in his high school production (our high school production, full disclosure we attended the same school) of Les Mis, but this time around he gets to belt Jean Valjean’s refrains, while Bishil and Curran shine alongside him (Curran especially!) and the Fillorian royal court (sans Abigail the Sloth) fill in the ensemble.

Watching the three minute interlude, which was first posted on Vanity Fair, I couldn’t help but notice that the scene has an obvious Buffy-style “Once More With Feeling” flavor to it; the cast’s little quips (“I had to skip a couple of verses,” Margot injects when Eliot finds himself belting without the right accompanying music) and the fact that it’s all brought on by a magical intervention just scream Whedon-inspired musical. And so naturally this got me thinking (daydreaming) about how much potential this cast has for more musical fun—more Whedon-esque musical fun. So, let’s start with that now-classic 2001 episode of Buffy (which just celebrated its 20th anniversary), wherein a musical demon enchants Sunnydale and all of its residents with the curse of song and dance. I can easily see nearly every cast member perfectly fitting with one of “Once More With Feeling”‘s witty songs. Not to be presumptuous or anything, but here’s how I’d write next week’s episode to integrate the soundtrack of “Once More With Feeling”…just because.

— Penny would obviously be a shoe-in for Spike’s “Let Me Rest in Peace,” which would nicely sum up his feelings about his hot and cold relationship with Kady.

— Quentin and niffin-Alice could do a dark rendition of Anya and Xander’s lovers duet “I’ll Never Tell,” since we all know they’re both terrible and keeping secrets and yet somewhere deep down in Alice’s sizzling blue spirit heart there may still be feeling for Quentin. Alice is still in there guys!

— My colleague Dana Schwartz suggested that Anya’s rockstar bridge in the middle of “I’ve Got a Theory,” where she postulates about the evilness of bunnies, would absolutely be a Margo number, and I have to agree.

— It bums me out that there’s not enough Mayakovsky on this show, and so I’d hand Giles’ fatherly crooner “Standing” over to the Brakebills South instructor—I have a feeling it would be delightful and crude.

— And last but not least I’d bestow upon Julia Buffy’s bring down the house song: “Something to Sing About.” Without her shade, she’s just as lost as the Slayer was after being forced back to life by the Scooby Gang.

That’s my plea. Not that I’m asking show writers to take a hint or anything, but like, just consider it.

Watch the cast of The Magicians sing Les Miserables‘ “One More Day” below, and catch the show Wednesdays at 9 p.m. on Syfy. 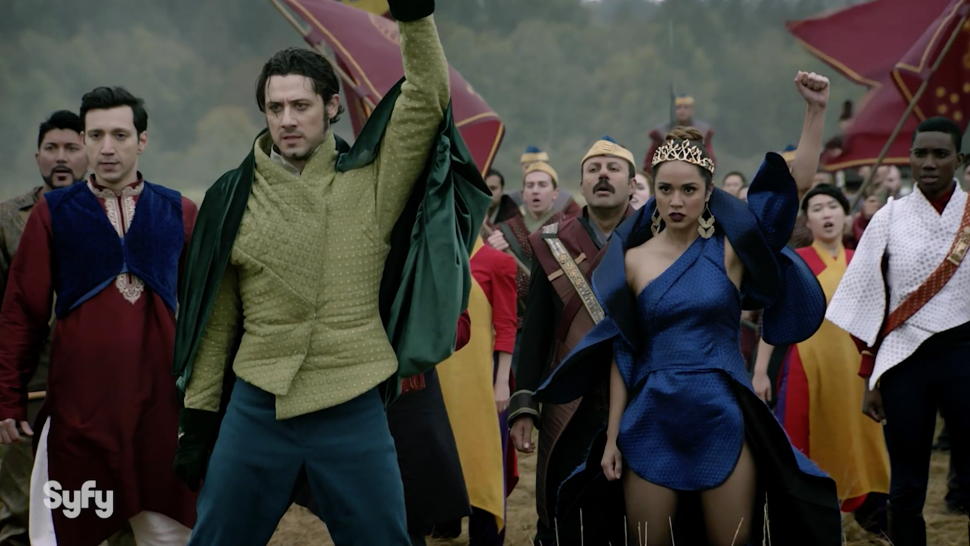