This episode had so many incredible lines that instead of writing up a recap, I found as I was watching it I was more-or-less just typing up the script verbatim. “Lesser Evils” is The Magicians at its zingiest and most self-aware. In other words, my favorite type of Magicians episode.

After Kady delivered her signature knock-out punch at the end of last week’s episode, Quentin wakes up in a Brakebills cage, alongside a guy with a minor case of sexually transmitted lycanthropy (who will not be shamed). The goal is dealingd with the Alice problem, aka the Alice niffin that Quentin has trapped in his back tattoo because she’s too niffin to be set loose and Quentin is too in love with the trace of Alice left to box her, the typical way of dealing with this sort of creature. And so Quentin is our little Hamlet with a man-bun, stuck between a rock and a hard place and settling with inaction.

Back in Fillory, Eliot and Margo are preparing for a war with Loria in which they’re outgunned, outmanned, outnumbered, out-planned, and with a magical wellspring becoming increasingly erratic with magical blackouts.  And so, offered the chance to become a heroic warrior king (“God, he’s already seeing the statues,” says Margo), Eliot volunteers to engage in one-on-one combat by proxy.

I know I’ve mentioned this once or twice, but Margo Hanson (Summer Bishil) has become far and away my favorite character on this show. Although her role in season one was more or less relegated to witty one-liners and B-plots, season two has allowed Bishil to show her full range with a character that manages to be prickly, vulnerable, bitchy, tender, take-no-shit and level-headed all at once, all while being the funniest person in the room.

In a glorious and unexpected moment reminiscent of season one’s insane asylum “Shake It Off” singalong, Margo comes up with the perfect plan to pump Eliot up before battle: a big musical number. And so, enchanted by magic, Hale Appleman’s Eliot stars as Valjean in a Fillorian production of Les Mis as they all sing “One Day More.” Fen (Brittany Curran) full on kills it dead. Eliot is a delight. (“Sorry, I had to skip some verses. They’re great, they just don’t really apply to our situation,” Margo says, preempting complaints on the internet.)

And so, fists raised, the entire royal guard of Fillory arrives at the designated battle site where Eliot will use an enchanted sword to face off against the king of Loria who also happens to be a master dueler. “I’m confused. Is the duel not today?” the Lorian king asks, having listened to the lyrics that were all about tomorrow being the judgement day. “It’s a metaphor,” Eliot shoots back.

The two kings fight, and, when Eliot gets the upper hand with the aid of his magical sword, the other king goes all Count-Rugen-in-the-Princess-Bride and straight up flees. But the battle isn’t over until one king is dead. “Another favorite show of mine?” the Lorian Prince says. “Into the Woods.”

Eliot skulks through the forrest, fights the Lorian king, almost wins and then…. a magical blackout undoes his sword-fighting spell and leaves him defenseless. Eliot pulls a Katniss in the first Hunger Games and hangs out in a tree to protect himself while Margo scrambles to save his ass, and all of magic.

Perhaps we shouldn’t be surprised when price for the fairies to repair the magical wellspring is straight out of old school fairy tales: a royal child. Fen and Eliot’s baby. Queen Margo, our manipulative cunt who can always do the right thing even if it’s unbearably cruel, agrees, even though it isn’t her baby to give. The magic comes back, and King Eliot returns to the palace seemingly victorious until we learn that diplomacy has won out: turns out our DILF-y Lorian is also a bisexual king, and Fillorian law means Eliot is allowed to have a husband and a wife. “We’re all just one big polyamorous royal family,” Eliot says, which doesn’t exactly seem fair when Fen didn’t agree to this. Poor Fen—singing the Eponine part turned out to have been prophetic.

Back on Earth, Cady, Penny and Alice are tracking down Reynard’s son to harness his power, a son who turns out to be a charismatic and charming U.S. Senator no doubt en route to an inevitable presidency. The plan seems a little vague, but the basic ideas, as it plays out, is to break into his office and show him magic is real. “Obviously you guys believe this, and I respect that,” Senator Gaines says, panicking, in perfect politician fashion.  Shadeless Julia intends to kill him, has been planning to kill him the whole time; Penny and Kady stop her, and also learn a valuable lesson that even though she looks and talks like Julia, it’s not exactly Julia in there anymore (let’s call it The Alice Rule). When his inner demi-god flashes, the Senator passes out, and the trio bring him back to Brakebills and hide him in a closet temporarily.

Reynard is already in the Senator’s head, and he’s pacing Brakebills, trying to get in, an opportunity that presents itself when the aforementioned magical blackout hits, and the school’s protective wards are down. (A brief side note: why do Brakebill’s exterior shots sometimes make the school look like an English estate out of a Thackery novel and sometimes like a suburban L.A.  high school?)

Reynard enters, stage left, and Quentin/Alice have one shot to fight him but Q is too slow deciding whether he should let her out to fight and then he’s frozen, Reynard having stole the Beast’s classic move from his intro. Ever the noble representative, Senator Gaines goes out to meet with his murderous, trickster god father. Reynard gets his son, and yet again, Julia misses her shot to skin a fox.

Finally, in a strange parking lot, Quentin finally gives up. He lets Alice go. Any guesses on how many episodes until she’s back?

More really great lines from this episode, mostly from Margo and Eliot 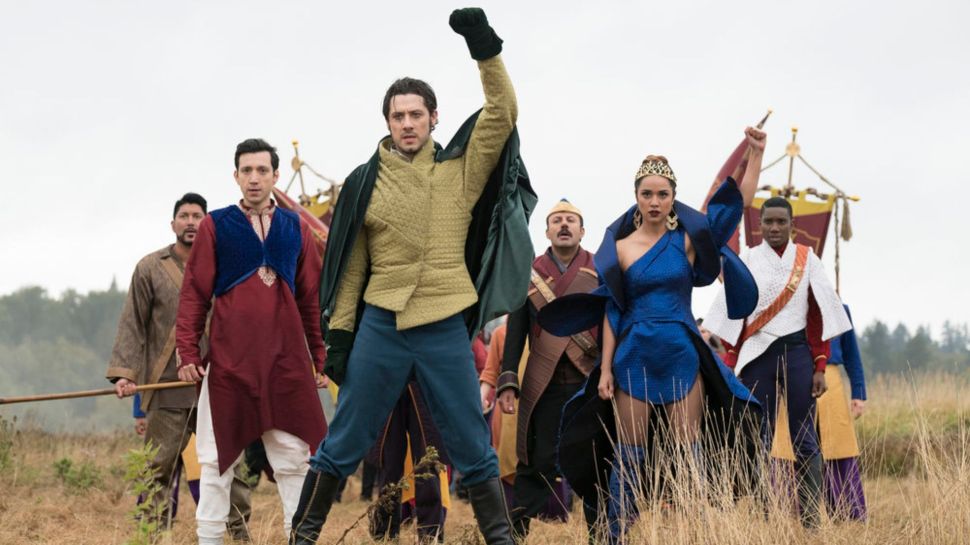