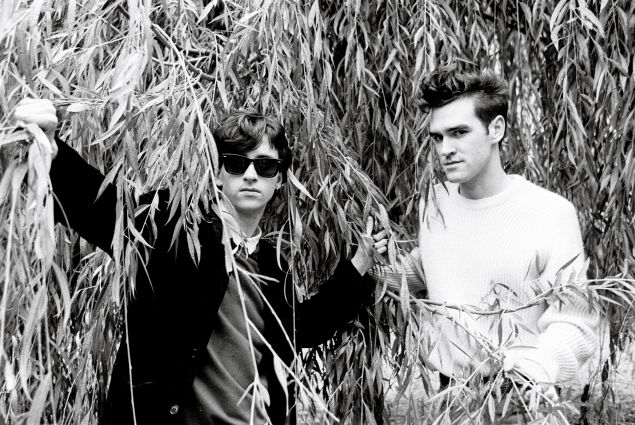 Not even five years into their flourishing career, guitarist Johnny Marr, perhaps the most celebrated musician of all the bands that emerged from the U.K. in the 1980s, was on the verge of leaving the band. Tensions between Marr and lead singer Stephen Morrissey had reached a boiling point, and were driving him to drink. And the disagreements he and Morrissey were having about the band’s future direction weren’t helping.

Morrissey loved ’60s English Schlager music. Marr, who took his influence from the likes of James Williamson, Mick Ronson and John McGeoch, wanted the band’s next LP, Strangeways, Here We Come, to be a more expansive statement of the Smiths’ creative prowess.

“I didn’t form a group to perform Cilla Black songs,” the guitarist told Record Collector in 1992.

When Morrissey, Marr, Andy Rourke and Mike Joyce formed the band in 1982, they were the antithesis of the New Romantic era of British pop.

Eschewing the eyeliner and synths of their contemporaries for T-shirts, jeans and electric guitars, they balanced the intensity of The Stooges and Neil Young + Crazy Horse with the kitchen-sink realism of ’60s British New Wave cinema, creating a distinctive sound that would quickly define their native Manchester: a Byrds-style jangle approach to the local brand of post-punk first defined by iconic groups like The Buzzcocks and Joy Division.

But such diverse influences and personalities proved to be a difficult balance; soon there was something even greater than tension and creative differences driving the Smiths apart. Despite enjoying a rabid cult fan base in the United States and their massive popularity in the U.K., the band’s label Sire/Reprise wasn’t properly promoting the Smiths to get them onto the Billboard charts, let alone the cover of Rolling Stone.

“Examine the records that are above us this week and you draw back in horror,” Morrissey told fanzine Rorschach Testing in late 1983.

“I can’t see any reason why we do not deserve to be there…not one solitary reason. So many people seem content with the monotonous faces that dominate the entire spectrum of popular music. They’re content with Billy Joel. Nobody questions Billy Joel. Nobody quizzes people like Iron Maiden. When groups come along that possess a certain amount of brain, people do probe and say ‘why this and why that’? They’re so used to this structured language, a kind of frozen dictionary, certain terms you can use and when you take a different one it spoils things. We don’t follow any particular rule though.”

On March 30, 1987, Sire/Reprise finally acknowledged the importance of the Smiths and their swelling underground following in the States with the release of Louder Than Bombs, a 24-track collection of nearly all the singles and accompanying b-sides the band had released in the U.K. between 1983 and 1986.

The first Smiths release that specifically catered to the band’s established U.S. fans, Louder Than Bombs also served as something of a young person’s guide to hip music. But it was also so much more than that.

Louder Than Bombs was the quintessential introduction to the group, encompassing everything that defined them as a band.

Perhaps even more so than the trio of LPs the Smiths had released since forming—1984’s The Smiths, 1985’s Meat is Murder and 1986’s The Queen is Dead—the 7-inch singles the group dropped consistently in England between their full-lengths were what came to define their art, songs that went totally unheard in much of the U.S. until Bombs was released. Now they were housed together not as some kind of Greatest Hits or Best Of package, but in a unique standalone statement, glued together by seven newly recorded songs.

“The Smiths were operating on a very old-fashioned basis, that you record singles and you release them like sending postcards or letters home,” Tony Fletcher, author of the Smiths biography A Light That Never Goes Out: The Enduring Saga of The Smiths, explained to Salon.

“The catalog wouldn’t have looked better—it wouldn’t have sounded better, because another reason why the Smiths sound so timeless is because some of their recordings are relatively amateur. They weren’t trying to record to the standards of the time. They weren’t trying to say, ‘What do we need to do to get on the radio? Oh, we need synthesizers and big booming reverb drums.’ So I see that the amateurness of all of this actually plays into why the Smiths lasted. Could their career have been more successful had they taken their time with albums and not made daft career decisions? Yes, but I’m not sure they would have been as exciting and I’m not sure we would have been as excited by them all these years later.”

The 72-minute-long collection, which featured such Smiths faves as “Panic,” “Shakespeare’s Sister,” “Heaven Knows I’m Miserable Now,” “William, It Was Really Nothing,” and, of course, its indelible b-side “Please Please Please Let Me Get What I Want,” also features the group’s most striking packaging as well. Its title comes from a particular line in Canadian poet Elizabeth Smart’s 1945 prose novel By Grand Central Station I Sat Down and Wept:

Everything flows like the Mississippi over a devastated earth, which drinks unsufeited, and augments the liquid with waterfalls of gratitude; which raises a sound of praise to deafen all doubters forever; to burst their shamed eardrums with the roar of proof, louder than bombs or screams or the inside ticking of remorse.

The cover art—arguably the most iconic image of The Smiths’ catalog—was designed by Morrissey himself, its salmon duotone accentuating a photo of fellow Manchester native and renowned playwright Shelagh Delaney originally featured in The Saturday Evening Post following the debut of her 1958 play A Taste of Honey.

It wasn’t the first or last time Delaney served as an inspiration for the Smiths. She’d previously graced the sleeve for the band’s “Girlfriend in a Coma” 7-inch, and Morrissey used the plot to A Taste of Honey for the song “This Night Has Opened My Eyes,” which was recorded exclusively for a 1983 John Peel session, initially featured on the group’s first singles compilation Hatful of Hollow (1984), and one of the true highlights of Louder Than Bombs.

When Louder Than Bombs hit America, it was met with a resounding chorus of critical fawning that its English counterpart, The World Won’t Listen, never quite received—many British fans felt gypped with the song selection on their U.K. singles collection after seeing what the band chose to release in the States.

“In any other industry, purchasers of The World Won’t Listen would be entitled to a full refund!” lamented writer Danny Kelly in the December 10, 1988 issue of the New Musical Express.

According to Observer contributor Jim Farber in his review for Rolling Stone, Bombs excelled as a quintessential portrait of not only the band, but the persona of Morrissey as one of the most enigmatic characters in modern rock.

“In terms of sheer directness,” he wrote in the May 21, 1987 edition of RS, “Morrissey has definitely outdone himself on this album, kicking off side one with ‘Is It Really So Strange?’ an open invitation to punch him, kick him and break his spine. Of course Morrissey delivers such declarations totally deadpan. In fact, his withering, overdramatic vocal style has become his greatest comedic tool: the more he moans, the more you’ll howl.”

“Morrissey is a postmodernist Hamlet, deciding whether he should live or die,” mused the great Roy Trakin in his review of the album for CREEM. “And somehow the thought process becomes a slapstick meditation on the healing nature of art. ‘Oh yes, you can kick me/And you can punch me/And you can break my face/But you won’t change the way I feel.’ ”

Despite the revolution it incited in America, Louder Than Bombs wasn’t the first album of its kind to hit the market.

The recently departed Chuck Berry first set the stage for such compilation albums with his debut LP After School Session, largely comprised of 45s he released in the months leading up to its debut. Meanwhile, back in England, Echo & The Bunnymen released a collection of their early singles Songs to Learn & Sing in 1985, while ’86 saw The Cure compile the wildly popular Standing On The Beach LP from their own odds and sods.

But The Smiths undeniably ushered in a brave new era for the singles compilation in ’87 by doubling the length of their contemporaries’ works.

It was a challenge picked up later that summer by their Manchester brethren New Order when they released Substance, which filled not one but two cassette tapes and compact discs with many of the remixes and extended versions of the golden nuggets that made them such a staple on the New York City club circuit in the late ’80s.

While Louder Than Bombs expanded the Smiths’ audience beyond their cult fan base, just one year after its release the band was no more. Shortly after Marr left the group in the summer of ’87, he joined forces with Matt Johnson in The The, and was featured on the British group’s acclaimed 1989 LP Mind Bomb.

Morrissey, meanwhile, dove headfirst into his solo career with the release of Viva Hate in ’88, the first in a long succession of recordings under his own name that continues to bear fruits to this very day. Joyce and Rourke would link up with Sinead O’Connor just in time for work to begin on her seminal second LP I Do Not Want What I Haven’t Got, while Joyce also played drums on Julian Cope’s 1991 masterpiece Peggy Suicide.

As for The Smiths brand, a live album cut during the 1986 tour in support of The Queen Is Dead called Rank was released in the fall of ’88. In 1992, the group finally received a proper greatest hits package with Best…I and Best…II, a pair of titles that were largely scrutinized by fans and critics alike as a record company cash grab. Its since been deleted from the overall catalog currently owned by Warner Bros.

I’m sure every Smiths fan has a story like this: It was a couple of guys a few grades ahead of me who I worked alongside at the local movie theater in Newburgh that first showed me The Smiths. At the time, one told me to pick up Louder Than Bombs, because it was the only Smiths album you’d ever need. Thirty years later, he’s still right. 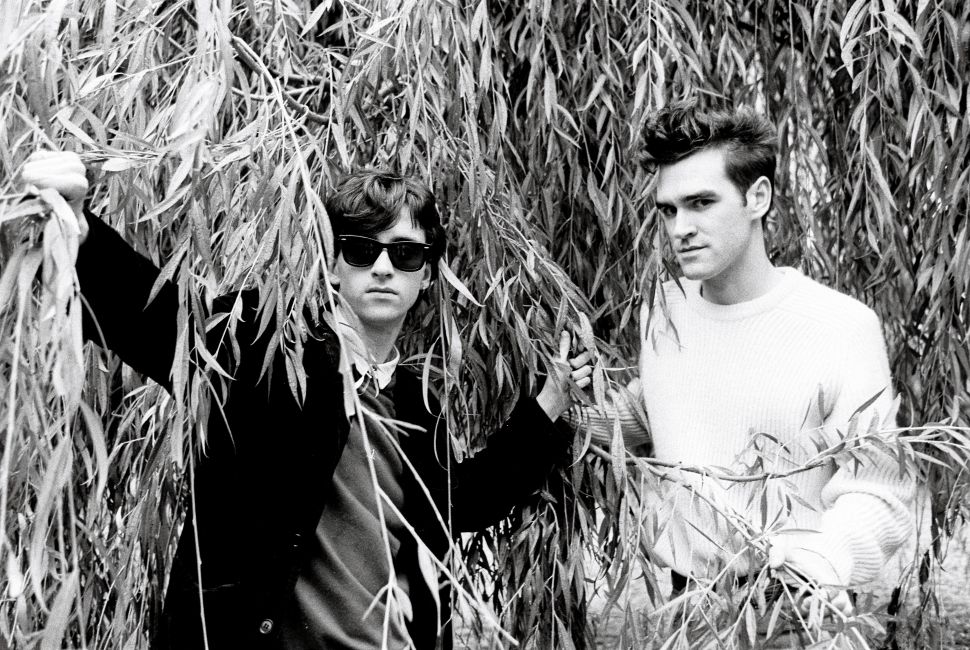