Morgan has been this Zen-calm pacifist for so long now, it’s easy to forget that he was once a kill-crazy lunatic, muttering to himself in a booby-trapped room and shooting at anyone who came near him. His exceedingly soft-spoken demeanor, his self-discipline, his steadfast and foolhardy-seeming conviction that all killing is wrong, all of it is a conscious attempt to heal his mind, and to keep that feral self at bay.

It’s been there all along, though, under the surface, and this week’s episode, “Bury Me Here,” scratches at that façade until the beast peeks out again. It’s something of a one-dimensional story, but Morgan’s transformation is fascinating, and will clearly be a crucial factor in the coming war.

The setup for how things will go down with the Kingdom has been drawn in huge flashing neon letters by this point—we know King Ezekiel thinks he can maintain a wary peace with the Saviors, and that head knight Richard is itching for war instead, and something has to give. So it all proceeds with an air of inevitability that is leavened slightly by the very Walking Dead cold open, a puzzling scene of the Kingdommers (Kingdomites?) loading up their truck with a single solitary cantaloupe, the explanation for which dawns slowly over the course of the episode.

See, Richard has a plan: He’s going to make sure the Kingdom’s next “tribute” to the Saviors is incomplete. Negan’s people will kill one of Ezekiel’s subjects as punishment, and the king will have to join Rick’s fight in retaliation. So he distracts the Kingdom convoy with a roadblock made of shopping carts long enough to spirit away one of the dozen cantaloupes they have agreed to bring to Negan, ensuring that the tribute will be light.

The plan is to sacrifice himself for the greater good, becoming a martyr to the righteous cause of forcing war. He expects to be the one to die (he’s even dug his own grave next to the shopping cart roadblock, a place of sentimental value somehow attached to his dead daughter), because Richard has apparently never seen a television show before. The rest of us are like: Obviously they’re going to kill Benjamin. They introduced this new character out of nowhere whose defining characteristic is “nice kid our heroes instinctively like and want to protect.” His death as an emotional motivator for Morgan, Carol, and Ezekiel was such a foregone conclusion, he might as well have been wearing a sign that said “Next to Die.”

They rush him to Carol’s hermitage to try to save his life, but to no avail. And Morgan starts losing it. We see flashes of his old self come out, and then a coldness as he puts the pieces together and sees what really happened. The interesting part is that the real crazy rage doesn’t come out at first, when he confronts Richard. Richard owns up to what he did, realizing he made a mistake—but now that Ben is dead, he reasons, their best course of action is to make the Saviors believe they are knuckling under, and then get ready for war. Morgan’s not happy about it, but he also doesn’t explode yet.

The real hulking out only happens the next day: He sees Richard actually putting this plan into action, and he just can’t stand to watch it. They return to the appointed meeting place with their one sad and lonely cantaloupe, and Richard hands it over, starting to say something along the lines of “We get it now…” and Morgan just blows his top. Tackling Richard and choking him out right there in front of everyone.

He explains Richard’s mendacity to the shocked king, buries his body in his requested place, and then goes and takes his rage out on some walkers. He later tells Carol that he’s going to leave the Kingdom now and go “kill them, one by one,” abd it’s not clear if he means more walkers or the Saviors.

Carol convinces him to stay in her little graveyard house for now, but the last we see him, Morgan’s sitting on the porch sharpening his stick into a stake. In case we needed a heavy-handed metaphor for his transformation back from monk to monster.

His story runs parallel to Carol’s, as she starts to realize that her best efforts to keep to herself can’t stop her from wanting to help the people she loves, even if helping them means becoming a murderbeast. Carol’s no dummy: she’s known Daryl a long time, and she subconsciously knows he was lying that all was hunky dory back in Alexandria. And she hasn’t been sleeping.

When she asks Morgan about it, he demurs at first. That’s between her and Daryl. After flipping his shit on Richard, though, his perspective changes, and he tells her about Abraham and Glenn and Spencer and Olivia. I have no idea why Melissa McBride hasn’t been nominated for an Emmy yet, but she deserves one just for her facial expression as he tells her, which manages to combine disbelief, mourning, and steely resolve all into one horrible look. It means that she can’t keep herself separate any more, and she goes and tells the king she’s going to join him there, and join the fight.

There was also some sort of sub-subplot about gardening, which seemed like it might be significant, or might be a metaphor, or may just have been a excuse to have Ezekiel on his knees in the dirt as he tells Carol that yes, they’re going to have to fight—but not today. 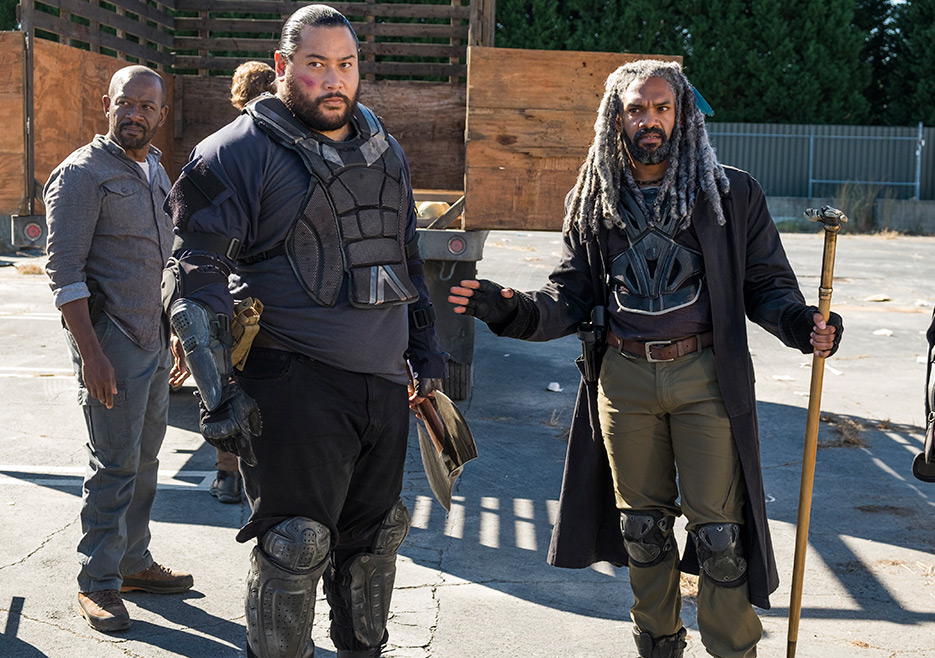