It’s easy to see why The Walking Dead is such a frustrating show, even to its most ardent fans. It keeps forgetting what makes it good, interesting, or enjoyable to watch. So, for example, every once in a while, it starts thinking that it is a character-driven show—some slow, character-developing drama that just happens to be set in the apocalypse—rather than being driven by its plot, its action, and its ability to tap into deep themes (life and death, the cost of survival, morality in the face of catastrophe, and so on).

None of that would work, of course, without the strong, well-drawn characters that populate its world (or the generally excellent actors who embody them). But TWD is still the kind of show that lives or dies by its story. And so when it decides to slow down to give us character-centric vignettes, rather than letting their personalities and emotions emerge from their involvement in the plot, it starts to lag, and feel like a lot like filler.

Thus, “The Other Side,” which has a plot we can really summarize in just two paragraphs. Like so:

Right after Rosita arrives at the Hilltop to convince Sasha to help her kill Negan, the Saviors arrive. We assume they’re searching for Daryl, but they’re actually taking the Hilltop’s doctor (to replace the one Negan, y’know, stuffed in a furnace). Gregory, unsure if he can maintain his precarious hold on power if he lets the doctor go, tries to reason with them. But leader Simon just tells him that if anyone stages a coup, Gregory should come running to the Sanctuary. Maggie and Daryl hide, and are nearly found but they’re not, and then Daryl confesses to Maggie that he blames himself for Glenn’s death. She doesn’t blame him, though.

Meanwhile Rosita and Sasha made a run for it, sniper rifle in tow. They eventually make their way to a building with a line of sight to the outside of the Sanctuary. When they can’t get a clear shot at Negan, they decide to breach the gate at a weak point—where they find Eugene. Instead of letting them “rescue” him, he reveals that he’s a full-blown Savior now and runs to sound the alarm. Sasha, knowing Rosita has been thinking of this as a suicide mission all along, decides that her various talents (bomb-defusing, car-hotwiring, knot-tying) make her worth more to Alexandria alive, and so she locks her outside of the gate and runs off to kill Negan on her own. Rosita runs away, despondent, and finds Daryl, who’s come after them.

That’s it. There are some significant little moments along the way, of course. Gregory lets his paranoia overcome him so much that he thinks it’s a good idea to threaten Jesus. Simon does some ridiculous things with his eyes (“People say I have an expressive face” — Steven Ogg of Grand Theft Auto V fame is particularly good in this episode). The Saviors leave the Hilltop with a “replacement” for their doctor: a huge crate of aspirin. Maggie makes the important point that real revenge against the Saviors isn’t killing them, it’s beating them in this game of survival. Eugene has taken the “I am Negan” thing to a completely ludicrous and dorky extreme that must make the other Saviors cringe. And, oh yeah, Jesus is gay.

But the whole rest of the episode is given over to the tête-à-tête between Rosita and Sasha as they make their way to the Sanctuary, and there just…isn’t much there. We finally get Rosita’s backstory: every dude she ever met wanted to protect her, so she let them think she was weak until she learned whatever they knew and then took off. One guy taught her explosives; one guy knots, etc. Abraham was the first man who actually saw the capable, resourceful woman she really was, so he was the first one she actually loved. And then he left her for Sasha.

They do a little bit of bonding over that too: Rosita forgives Sasha, realizing that what she was really upset about is that Abraham, who always seemed on the verge of exploding, figured out how to be happy before she did, when she was supposed to be the centered one. She and Sasha promise to always have one another’s backs.

But what that means is clearly different for each of them. Sasha also sees how resourceful Rosita is, and she realizes those skills are going to be very useful to Alexandria in the coming days. It would be a waste to throw all of that away on something as simple as revenge. So she makes her move and locks the gate behind her, smiling as she runs into the compound with her gun blazing.

I hope we see her again, but seems like a one-way mission, especially with only one of them. Maybe Rosita and Daryl are going to team up to move in after her, or maybe he’s just come to bring Rosita back, but it’s hard to imagine Sasha gets very far with her one gun.

In the end, the show took two fairly expendable characters—neither has had much distinction to them for seasons on seasons—and just decided to develop one and sacrifice the other. It gave Rosita a backstory and then used that same story as a rationale to keep her alive. Couldn’t it just as easily have gone the other way?

Anyway, if we’re sacrificing useless characters, let’s get rid of Gregory. That guy has far outlived his usefulness to both the Hilltop and the plot. And I sure wouldn’t mind seeing Eugene burn. 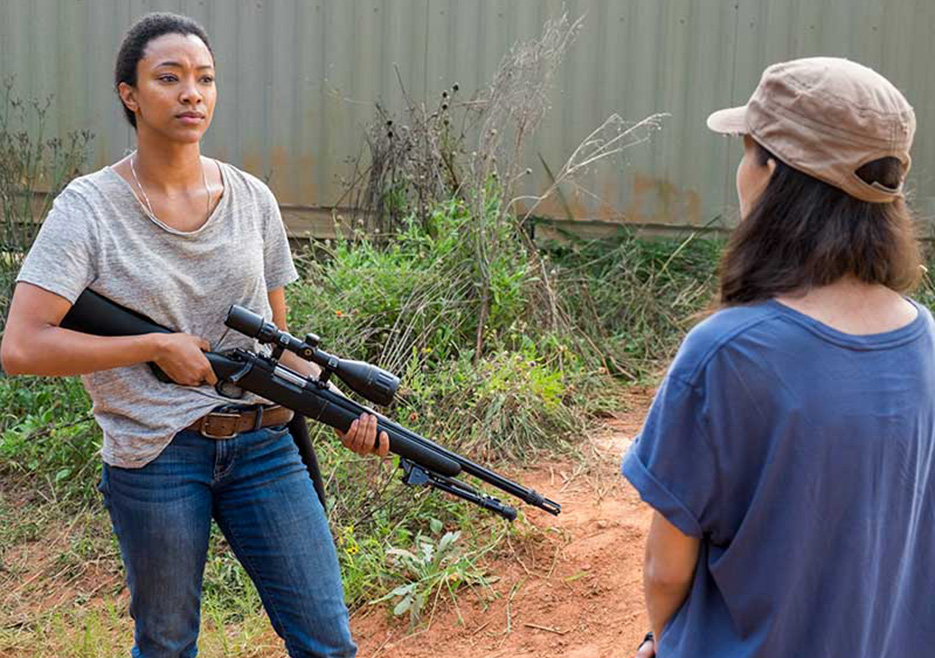