Thank god for Tara Chambler. In a world of unremitting tragedy populated by grim souls, funny people are a rare commodity. Most of the characters we’ve come to love rarely even smile. Or when they do (I’m looking at you, Rick) they look like their faces are about to crack open with the effort. Moments of comic relief have become few and far between lately. Abraham and his unique turn of phrase are gone. Eugene was always good for a few laughs, but it’s hard to find the humor in his newly dark path (more on this in a bit). And Negan may be a funny guy, but every wisecrack comes laced with menace.

Tara, on the other hand, is just purely funny. Even when she’s not being overtly jokey, as in this episode, which involves her in a deadly serious plot, she approaches the world with an offbeat tentativeness that never fails to bring a smile to my face.

Tara finally tells Rick about Oceanside. We always knew she would, of course—the plot demanded it, no matter what moral qualms she may have about breaking her promise. To her credit, Tara is still plagued by guilt for what she’s doing, though Rick (such a credible authority on ethics!) assures her that she has no reason to be. They are in a fight that will benefit everyone, including Oceanside, and the only way to win is to get more guns for the Junkyard. If Oceanside joins them, it’s icing on the cake.

So Tara creeps into Oceanside leader Natanya’s house and holds her at gunpoint while she tells her that she has a choice: join them and fight, or Alexandria will take them over and leave with all of their guns. Natanya and her granddaughter Cindy have a different plan, though. They tackle Tara and try to use her life as leverage to get the intruders out. Tara admits that her gun was unloaded the whole time, and Cindy remembers why she trusted her in the first place. Tara clearly never wanted to hurt anyone, and so maybe this offer is a legit way of fighting back against the Saviors. But Natanya is having none of it. The Saviors are too strong, and this is just a march to the slaughter.

Rick, Jesus, Daryl and assorted Alexandrians have meanwhile been setting off explosives all outside the gates of Oceanside, making it seem like they’re under attack and driving them all into one spot, with Michonne up in a tree with a sniper rifle making sure there are no stragglers. The offer is the same: join us in our fight or lose your guns. Not so fast! Natanya says, emerging with Tara as her hostage. Go away instead.

Natanya quickly realized her position isn’t as strong as she thought. There’s a sniper in a tree. If she shoots Tara, their guns are forfeit anyway. And Rick isn’t going to back down. This is worth more than any one life.

Not that it matters, since the explosions have attracted a herd of barnacle-covered walkers. Cindy uses the distraction as an opportunity to punch her own grandmother in the face (man sometimes I really love this show) and free Tara, since she and a lot of the younger Oceansiders are starting to think fighting is a pretty good idea. Rick & co. untie their captives and they all fight alongside one another to kill all the walkers.

On any other show, this would be the moment when, having now fought as a cohesive unit, Oceanside throws in its lot with Alexandria and they all go fight the Saviors together. But The Walking Dead is always concerned with issues of leadership—who makes the decisions, who follows, and why. So Natanya, still stuck in her thinking that hiding is the only safe option, tells her people that as much as they may want to, they can’t fight. Rick, just take our guns and go.

So they do, stripping Oceanside of every single gun and taking off. Tara decides she really doesn’t feel bad about the whole thing and pauses on her way out to give the finger to an 8-year-old girl. Just ’cos.

Echoing the theme of paranoid leaders with eroding support, Gregory is continuing his slow burn over at the Hilltop, watching as Maggie assumes more and more of a leadership role. He follows her outside of the gates and sort of half-confronts/half-apologizes to her, and then stands guard as she digs up a blueberry bush to replant. That’s when this truly detestable dude actually momentarily considers stabbing a pregnant woman in the back because she slightly threatens his dominance. You know, in case this show needed another example of toxic masculinity.

They’re interrupted by a walker, though, and Gregory tries to assert his manliness by saying he’ll take care of it, but of course he’s never had to actually fight and so Maggie has to stab it for him. While another one jumps out of the bushes and attacks him, and he literally has to scream to Maggie for help. She dispatches the walker and then cheerfully announces to a convenient group of sudden passersby that Greg has never killed a walker before but he’s learning. And we watch his face as his internal man-points meter ticks down, down, down.

So he calls up his assistant and hauls out a map. Seems it’s time for Gregory to take Simon up on his (clearly sincere) offer to seek sanctuary at Sanctuary.

Where Sasha, unbeknownst to our heroes, is still alive, being held in Daryl’s old cell. A super-rapey Savior named Dave tries to take advantage of her, but Negan swoops in and stabs the dude through the throat with a gigantic knife. Rape is against the rules of Sanctuary, he explains to Sasha, clearly believing that his law and order views will surprise her into starting to sympathize with him. But dude, you beat this woman’s boyfriend to death with a bat. She’s not weak little Eugene, who came over to your side when you waved a bit of creature comfort under his nose. She’s strong, independent, and has little patience for your shit.

Also, Negan has a very selective definition of rape: demanding sexual favors from a prisoner qualifies but forcing multiple women to marry you or watch their loved ones die doesn’t? The stage show he’s putting on for Sasha is clearly just that.

He leaves her the knife, claiming that if she decides to live, killing walker Dave rather than either letting it kill her or slitting her own wrists, it means she is starting to come over to his side. Which, no, not really. Because the makes the choice he wants, and then turns around and tries to convince Eugene to give her a gun or a knife. She says it’s to kill herself, but like Negan’s harem, she’s really plotting to carry out the rest of her revenge. Problem is, Eugene doesn’t give her a weapon—he gives her the poison pill he made for the women, which doesn’t really help her at all.

The larger problem is that Eugene has revealed to Negan that Rick’s people are planning to rebel. And it appears the Saviors are now planning a preemptive strike. Luckily Alexandria has one more trick up its sleeve: Dwight has defected. If they can trust him, he may be the key to winning the whole war. 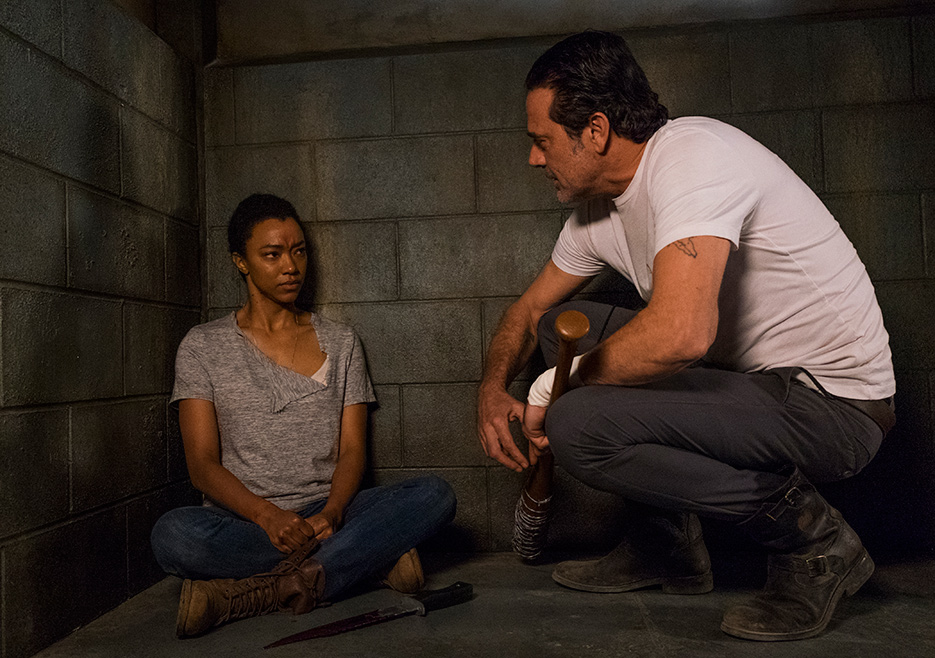