Conservatives love getting mad at the war on Christmas. After accusing Obama of being a secret Muslim and wearing unflattering hats, it is their favorite thing. It’s impossible to be a good Christian in this country unless you’re constantly terrified that Obama’s secret deep state Muslim forces are going to stomp all over the nativity scene on your lawn.

This year, there’s a new thing to be furious about: a parody children’s book from Daniel Kibblesmith called Santa’s Husband (Harper Collins) in which Santa is a gay, black man. The idea for a children’s book came to Kibblesmith, a writer at The Late Show with Stephen Colbert, when he tweeted last December following the outrage when Mall of America hired a black man to portray a fictional character:

Me & @JenAshleyWright have decided our future child will only know about Black Santa. If they see a white one we'll say "That's his husband"

Now, Kibblesmith and illustrator AP Quach are out to destroy America by brainwashing our children into thinking that an immortal being who lives with hundreds of elven servants and delivers free toys to children all over the world in a single night could possibly have high melanin production and a loving relationship with another man.

Ever the masters of irony, angry conservatives took to the internet, not quite grasping that their anger was what Kibblesmith was poking fun at in the first place.

A little time-saving advice: don’t try to teach anyone that the real St. Nicholas was a 4th century brown-skinned bishop from where is now Turkey, or make the case that any man who confidently rocks monochrome red velvet with fur trimming was probably gay all along (and free toys for everyone? A gay communist).

Being outraged on the internet (and furiously trying to figure out whether or not Kibblesmith is one of those dirty Jews trying to ruin America) is like yoga for Republicans. It relaxes and centers them. And they need that release—could you imagine feeling so insecure about your religious traditions that have already established themselves as the de facto dominant cultural norm that you feel betrayed by a parody book from a comedy writer? Well, either that or these people are really racist and homophobic. 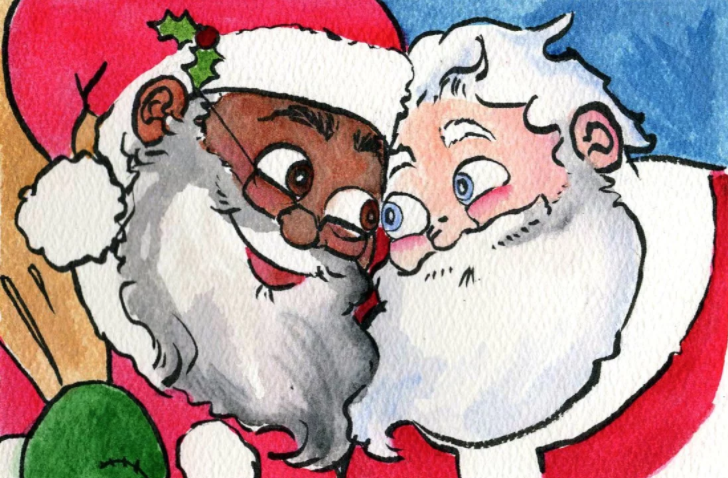